In new interview, Francis pushes for a church big on mercy, tough on law 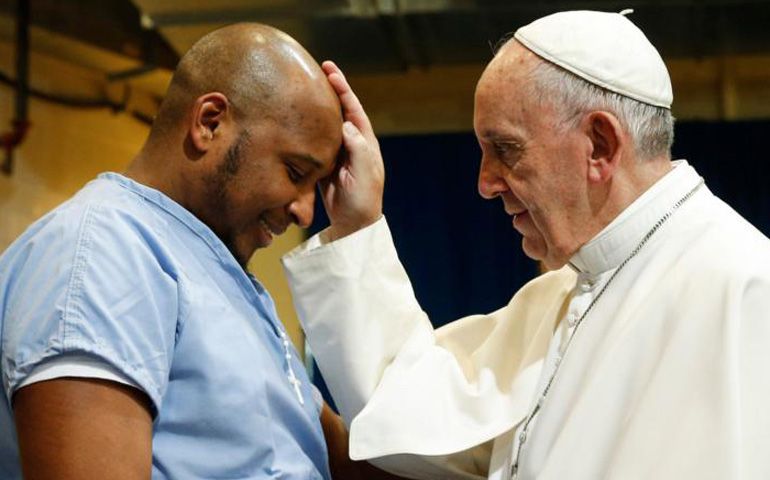 Pope Francis blesses a prisoner as he visits the Curran-Fromhold Correctional Facility in Philadelphia Sept. 27, 2015. (CNS/Paul Haring)
This article appears in the Mercy Interview feature series. View the full series.

Rome — Pope Francis has offered his most detailed outline yet for the role of the Catholic church in the modern era, saying in a new book-length interview the church needs to follow Jesus' example more closely and seek to "enter the darkness" in which many of today's people live.

The pontiff has also responded sharply to church leaders who have criticized his focus on the boundless nature of God's mercy and who suggest that the focus obscures church teachings.

Francis compares such criticisms to "angry mutterings" that Jesus also heard "from those who are only ever used to having things fit into their preconceived notions and ritual purity instead of letting themselves be surprised by reality, by a greater love or a higher standard."

In the new book, titled The Name of God is Mercy and to be released Tuesday, the pope states: "Jesus goes and heals and integrates the marginalized, the ones who are outside the city, the ones outside the encampment. In so doing, he shows us the way."

Reflecting on Jesus' healing of lepers -- who were forbidden to be visited or touched under Mosaic law for fear of causing contamination to the rest of the community -- the pontiff says the Gospels show there are two types of logic of thought and faith.

"The first is the logic of the scholars of the law," says the pope, using a term he frequently references in homilies to speak of those who emphasize strict adherence to church teaching over the practice of mercy.

"The second is the logic of God, who welcomes, embraces, and transfigures evil into good, transforming and redeeming my sin, transmuting condemnation into salvation," he continues.

Part 3: Francis explains 'who am I to judge?'

"Jesus enters into contact with the leper," says Francis. "He touches him. In so doing, he teaches us what to do, which logic to follow, when faced with people who suffer physically and spiritually."

The new book is the result of an interview between the pope and Andrea Tornielli, an Italian journalist and the coordinator for the Vatican Insider news website. The book is being published in 86 countries and about 20 languages on Tuesday. NCR received an advance copy of the English-language version of the text.

The book contains an extensive conversation Tornielli had with Francis in July 2015, just after the pope's visit that month to Ecuador, Bolivia, and Paraguay and before he presided over the contentious worldwide meeting of Catholic prelates known as a Synod of Bishops in October.

Tornielli states in the forward that he wanted to ask the pope questions on the themes of mercy and forgiveness "to analyze what those words mean to him, as a man and a priest" in the context of the Jubilee year of mercy Francis opened Dec. 8.

Throughout the 99 pages of the interview -- broken into nine interconnected parts in the book -- the pontiff speaks expansively about how he understands mercy and what it means to him personally and to the wider church.

He also responds at several points to those who say he has focused too much on mercy, and offers a clear vision for how the church should act in the future. He frequently bases his thoughts on the parables offered by Jesus, even saying once: "We must go back to the Gospel."

Francis also offers a number of personal anecdotes from his priestly work and notably quotes four times from homilies and writings by Albino Luciani, the man who served as Pope John Paul I for only 33 days before his sudden death on Sept. 28, 1978.

Outlining what the church should be doing today, Francis states plainly: "We need to enter the darkness, the night in which so many of our brothers live. We need to be able to make contact with them and let them feel our closeness, without letting ourselves be wrapped up in that darkness and influenced by it."

"Caring for outcasts and sinners does not mean letting the wolves attack the flock," says the pontiff. "It means trying to reach everyone by sharing the experience of mercy, which we ourselves have experienced, without ever caving in to the temptation of feeling that we are just or perfect."

Speaking more specifically about the so-called "scholars of the law," the pontiff again speaks plainly.

"I will say that there is often a kind of hypocrisy in them, a formal adherence to the law that hides very deep wounds," states Francis. "Jesus uses tough words; he defines them as 'whited sepulchers' who appear devout from the outside, but inside, on the inside . . . hypocrites."

"These are men who live attached to the letter of the law but who neglect love; men who only know how to close doors and draw boundaries," says the pope.

"Chapter 23 of the Gospel of Matthew is very clear on this; we need to return there to understand what the Church is and what it should never be," Francis continues.

"He describes the attitudes of those who tie up heavy burdens and lay them on other men’s shoulders, but who are unwilling to move so much as a finger; they are those who love the place of honor and want to be called master," states the pope.

"This conduct comes when a person loses the sense of awe for salvation that has been granted to him," he continues.

"When a person feels a little more secure, he begins to appropriate faculties which are not his own, but which are the Lord’s," he says. "The awe seems to fade, and this is the basis for clericalism or for the conduct of people who feel pure. What then prevails is a formal adherence to rules and to mental schemes."

"At times I have surprised myself by thinking that a few very rigid people would do well to slip a little, so that they could remember that they are sinners and thus meet Jesus," Francis states.

Editor's Note: This is Part One of a three-part story on Pope Francis' new book-length interview. Parts Two and Three are also available.

The pope's personal encounters with mercy

Francis explains 'who am I to judge?'

Vatican | In new interview, Francis pushes for a church big on mercy, tough on law

Francis explains 'who am I to judge?'

The pope's personal encounters with mercy