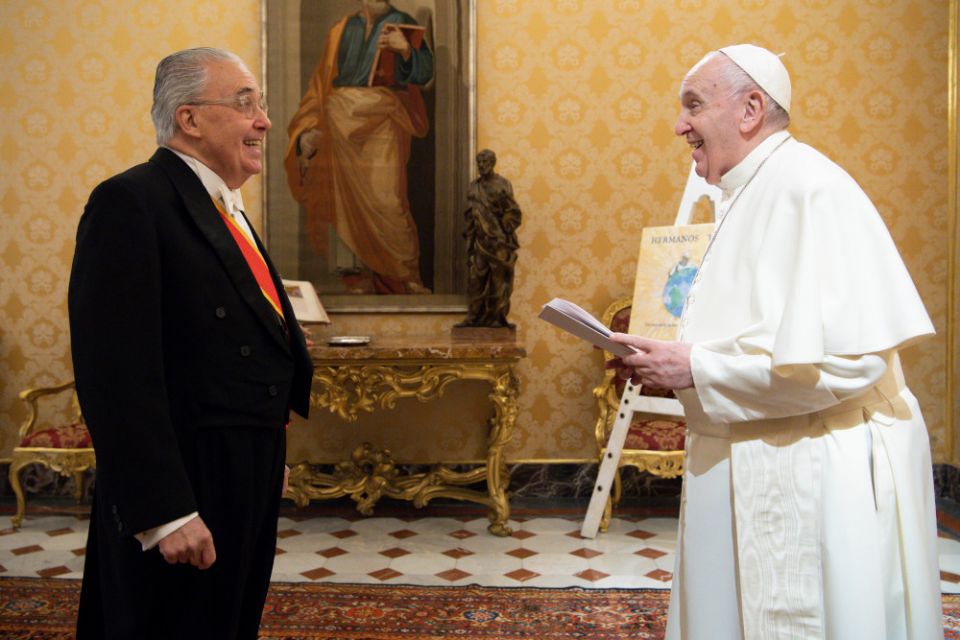 Guzman Carriquiry, the new Uruguayan ambassador to the Holy See, presented his letters of credential to Pope Francis Jan. 9, 2021, during a meeting in the library of the Apostolic Palace at the Vatican. (CNS photo/Vatican Media)

Vatican City — Pope Francis told Uruguay's new ambassador to the Holy See that a future visit to the country as well as to his native Argentina is still very much on the table.

In an interview with Catholic News Service Jan. 13, Guzman Carriquiry, who prior to his appointment as Uruguay's ambassador served as secretary of the Pontifical Commission for Latin America, said he decided to ask the pope about the long-awaited visit when he presented his letters of credential Jan. 9.

After years of doubt as to whether Pope Francis will ever make the long-awaited visit to Uruguay and Argentina, Carriquiry said he mustered up "the courage to ask the pope, 'Is a trip out of the question?'"

"In no way is it out of the question!" the pope exclaimed, according to Carriquiry. "I have the desire and the intention to travel to Rio de la Plata — to Uruguay and to my country." The Rio del la Plata forms part of the border between the two South American countries.

The pope made similar remarks in a November 2019 interview with the Argentine news agency Telam, in which he said that he was "eager to go" visit his homeland.

Carriquiry told CNS that Pope Francis said he originally planned a visit to Uruguay, Argentina and Chile in October 2017.

"But then, the Chileans warned me that October was too close to the Chilean presidential election and wanted the visit to be moved in January," the pope told the Uruguayan ambassador.

The pope explained that if he had gone, "I wouldn't have found anyone in Uruguay and Argentina because in the month of January, everybody goes to the beach; the cities are empty," Carriquiry recalled.

"Now I must wait for the pandemic to end and for favorable conditions to happen in general so that I make the trip when providence allows it," the pope said, according to the ambassador.

Carriquiry told CNS that upon his arrival at the Vatican, Msgr. Leonardo Sapienza, regent of the Prefecture of the Papal Household, told him, "You already know things here, you are already home."

The Uruguayan government did not see his faith nor his nearly 50 years of service at the Vatican as a conflict of interest, he said, but as an asset to foster ties with the Vatican.

"President (Luis) Lacalle chose me as an ambassador knowing my Catholic convictions perfectly well," he said. "But at the same time, I must respect what has been established and what has been indicated by the public authorities of the nation."

The concept of separation of church and state, he added, "is a very strong tradition in Uruguay, which I must respect and represent." However, it does not imply that the government does not appreciate "the important contribution that churches, within the broad framework of religious freedom, can offer for the common good of the Uruguayan people."

Regarding his meeting with Pope Francis, Carriquiry told CNS that the pope welcomed him, his wife, children and grandchildren "very happily" and that the meeting was "full of affection and joy."

Having known the ambassador since his days as archbishop of Buenos Aires, the pope shares a close friendship with Carriquiry. In June 2019, the pope presided over a Mass to celebrate Carriquiry and his wife's 50th wedding anniversary.

"The first thing the pope told me when I presented my letters of credential was that it was 'the irony of destiny that we now meet as different representatives,'" Carriquiry recalled.

Pope Francis "was very moved when he said goodbye," Carriquiry said. "I'm not saying this to boast, but he told me, 'This is a memorable day.'"

What's it like to have Pope Francis as your boss? Depends where you work

Why Christian Republicans insist Donald Trump is a good Christian

World at war is a common view for Francis