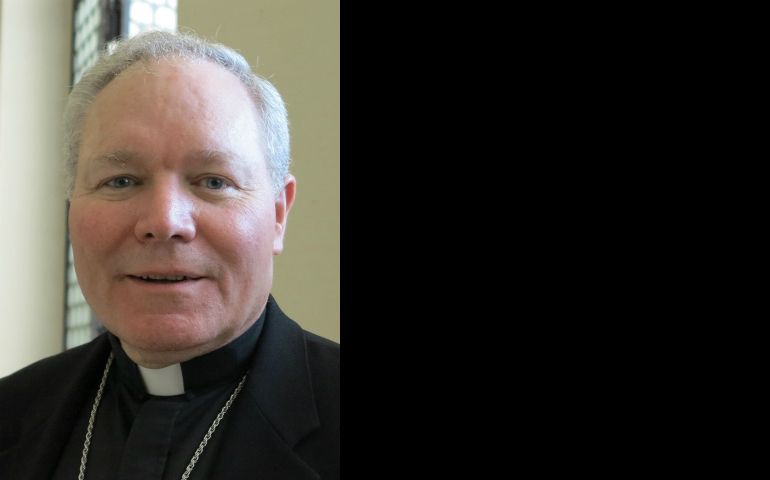 Pope Francis has named Bishop Edward J. Burns of Juneau, Alaska, to be bishop of Dallas, succeeding now-Cardinal Kevin J. Farrell, who headed the Dallas Diocese until he was named in August to be the first prefect of the new Vatican office for laity, family and life. Burns is pictured in a late June photo in Rome. (CNS photo/Carol Glatz)

Washington — Pope Francis has named Bishop Edward J. Burns of Juneau, Alaska, to be bishop of Dallas, succeeding now-Cardinal Kevin J. Farrell, who headed the Dallas Diocese until he was named in August to be the first prefect of the new Vatican office for laity, family and life.

Burns, 59, has headed the Diocese of Juneau since 2009. A priest of the Diocese of Pittsburgh, he is a former rector of St. Paul's Seminary in Pittsburgh and former director of the U.S. bishops' national offices dealing with clergy, vocations and priestly formation.

The appointment was announced Dec. 13 in Washington by Archbishop Christophe Pierre, apostolic nuncio to the United States.

Burns will be installed as the eighth bishop of Dallas Feb. 9.

In a statement, he said he is "humbled and grateful" for his new appointment and "at the same time, this announcement fills my heart with gratitude for the privilege and honor of serving the priests, deacons, religious and faithful of the Diocese of Juneau."

"I am profoundly grateful for my experience in southeast Alaska and I pray for God's grace as I take on my new duties as chief shepherd of the Diocese of Dallas," Bishop Burns said.

Burns is the current chairman of the U.S. Conference of Catholic Bishops' Committee on the Protection of Children and Young People. He also is a member of the bishops' Subcommittee on Catholic Home Missions and has been a member of their Administrative Committee.

In a recent interview with Catholic News Service in Juneau, Burns said that when he became diocesan bishop there, he learned that 10 percent of its population was Catholic and 60 percent didn't identify with any religion.

"I thought to myself, 'What a wonderful challenge this is going to be,'" he said. "It's an opportunity for us to engage in the new evangelization, because it's not like these people have never heard of Jesus Christ, or the Gospel message, or that they've never been in contact with the church. It's just that they choose to be secularists. They have chosen to step aside from their religion or faith.

"For us, it's a wonderful challenge," Burns said, "to awaken in them a relationship with Jesus Christ."

The son of Geraldine Little Burns and the late Donald P. Burns, Edward J. Burns was born Oct. 7, 1957, and raised in the Pittsburgh area. After high school, he attended St. Paul Seminary/Duquesne University in Pittsburgh, where he earned a bachelor of arts degree in philosophy and sociology. He then attended Mount St. Mary's Seminary in Emmitsburg, Maryland, graduating in 1983 with a master of divinity degree and a master's degree in theology. He was ordained a priest for the Diocese of Pittsburgh June 25, 1983.

After ordination, then-Father Burns served in parish ministry, diocesan administration, and in vocation and seminary work. He was the director of clergy personnel for the Pittsburgh Diocese when then-Bishop Donald W. Wuerl of Pittsburgh released him to serve at the U.S. Conference of Catholic Bishops in Washington.

On the national level he was executive director of the USCCB's Secretariat for Vocations and Priestly Formation from 1999 to 2008. Pope Benedict named him a monsignor in 2006. Burns returned to Pittsburgh in August 2008 as rector of St. Paul's Seminary and director of the diocesan preordination formation department and office for vocations.

Now-Cardinal Wuerl, who is archbishop of Washington, issued a statement on Burns' new appointment, calling it "a joy to hear" that Pope Francis "has entrusted" the Dallas Diocese to him.

In the bishop's years of ministry as a diocesan priest, at the USCCB and in Alaska, "I have seen the great pastoral care and spiritual leadership with which Bishop Burns has faithfully served the church," Wuerl said Dec. 13. "The Diocese of Dallas is blessed to be gaining an extraordinary shepherd, and he brings with him our prayers for his pastoral ministry."