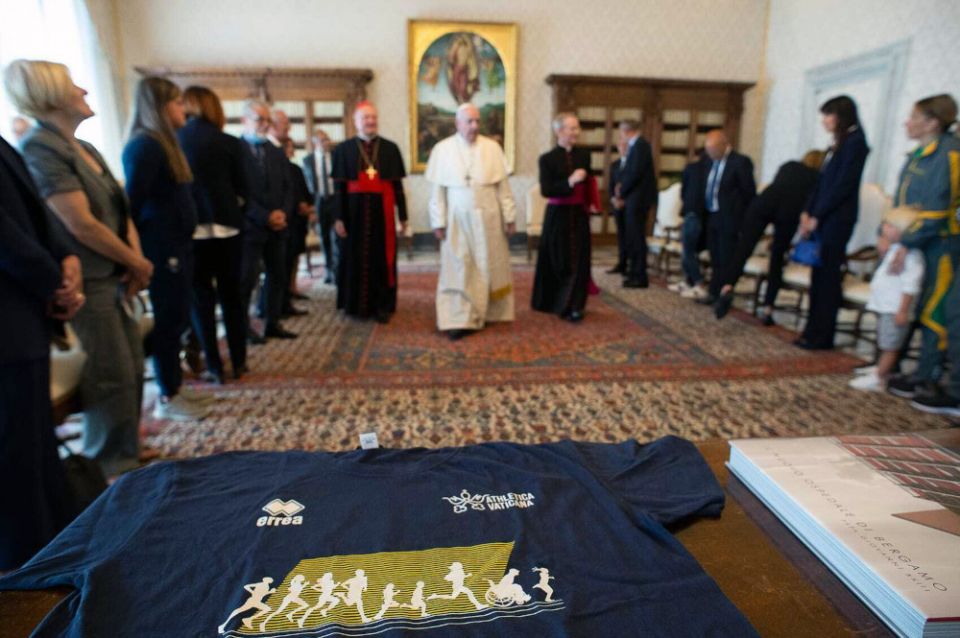 Vatican City — Not every sports team can claim Pope Francis as its honorary captain.

But Athletica Vaticana — a 70-member team that includes bishops, nuns and Swiss guards — is proud to claim the pontiff as one of its own.

The team is also a living example of his message on sports: "We all run together."

Francis' love for sports is highlighted in a new volume, "Get in the Game," which was announced this week. The collection of the pope's speeches and comments about sports was presented this week in Rome before a small crowd of star athletes, sports fans and Vatican officials.

The book presentation is part of a larger initiative by Athletica Vaticana called "We run together," which promotes equal dignity for all athletes and has raised more than $100,000 to assist hospitals fighting COVID-19.

Two years after its creation, Athletica Vaticana has tried to live out that message, said Giampaolo Mattei, team president and a journalist for the Vatican paper L'Osservatore Romano.

"We do sports to have fun, of course, but also while being a witness to inclusivity," he told Religion News Service in an interview.

"A papal team that didn't do this wouldn't make sense."

Earlier this year, Athletica Vaticana had organized an ambitious plan to bring together the greatest athletes from all over the world to play and compete alongside disabled athletes in Rome. The event was supposed to encapsulate Pope Francis' view on solidarity and sports.

The vision for that event was draw from an account in the Gospel of John that takes place after the Resurrection. In the story, the Apostles John and Peter runs to Jesus' tomb after hearing it is empty.  John, who is younger, runs faster, the people said. But he waits for Peter to catch up.

"The youth arrives first and the elderly stays behind. But out of respect, the youth waits for the old man," Francis said at a meeting with the Vatican team in May. "This is a very beautiful thing, which we must learn as humanity: to walk the pace of those who have a different rhythm, or at least consider them and integrate them in our step." 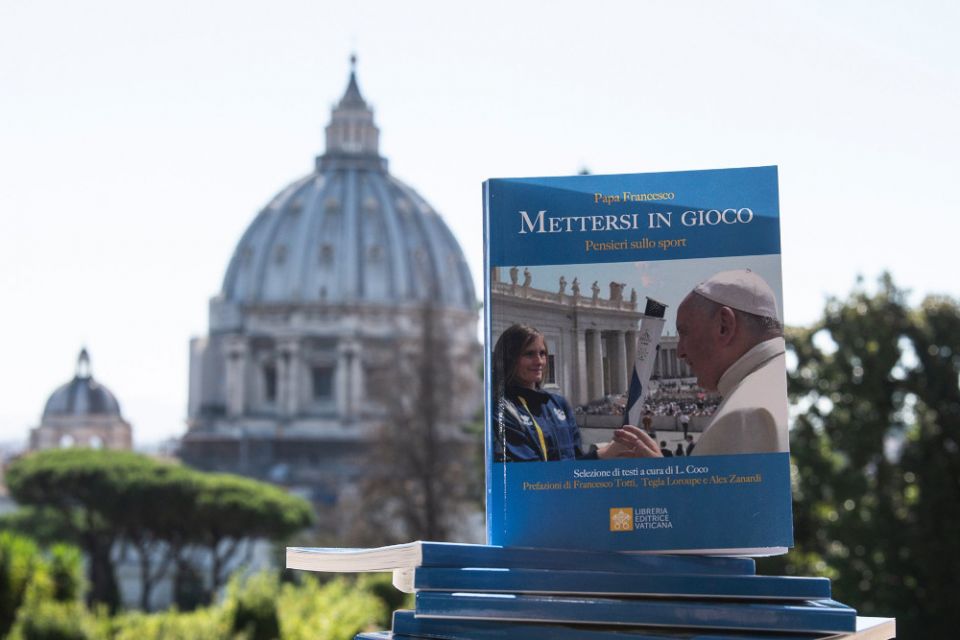 “Get in the Game” is a collection of Pope Francis’ speeches and comments about sports. (Vatican Media)

According to Mattei, these words have "become a symbol" of what Athletica Vaticana stands for. "We have to ensure that no one stays behind," he said.

Plans to bring athletes from around the world for an event to promote the pope's message were stalled by COVID-19 restrictions. Instead, the Vatican team organized an online auction to raise funds for hospitals in the Italian cities of Bergamo and Brescia, among the hardest hit by the pandemic.

Over 150 athletes from all over the world participated in the auction and sent special items for sale. Athletic champion Nicole Orlando, who has Down syndrome, and ski world champion Daniele Cassioli, who is blind, were among the participants. A shirt by soccer star Cristiano Ronaldo and a piece of a Ferrari contributed to the collection of over $100,000 for the health facilities tried by the pandemic.

The funds were sent directly to the hospitals rather than the Vatican.

"The idea is to offer a witness of a sport that is supportive and inclusive and has values that go beyond money and victory as an end in itself," Mattei said. "We put ourselves at service without asking for anything."

Pope Francis met "We run together" participants during a private audience at the Vatican on Sept. 5.

The initiative and the work of Athletica Vaticana have allowed athletes with disabilities to meet with other athletes on the same level, Francis said, and promote "a sport that is inclusive, fraternal and capable of healing wounds, build bridges and build social friendship."

"Especially for young people, this is an eloquent message," Francis said.

The pope's athletics team already sends a message of inclusivity with its members. From university professors to pharmacists, male or female, everyone is welcome to play sports for the pope and charity. The team also includes refugees and immigrants who come to Italy and are looking for a community. It also organized sports events with prisoners, people with disabilities and homeless people.

"Everyone has the same dignity," Mattei said. "The pope repeated this to us many times."

Vatican | Pope Francis' team joins up with star athletes like Ronaldo to say: 'We all run together'