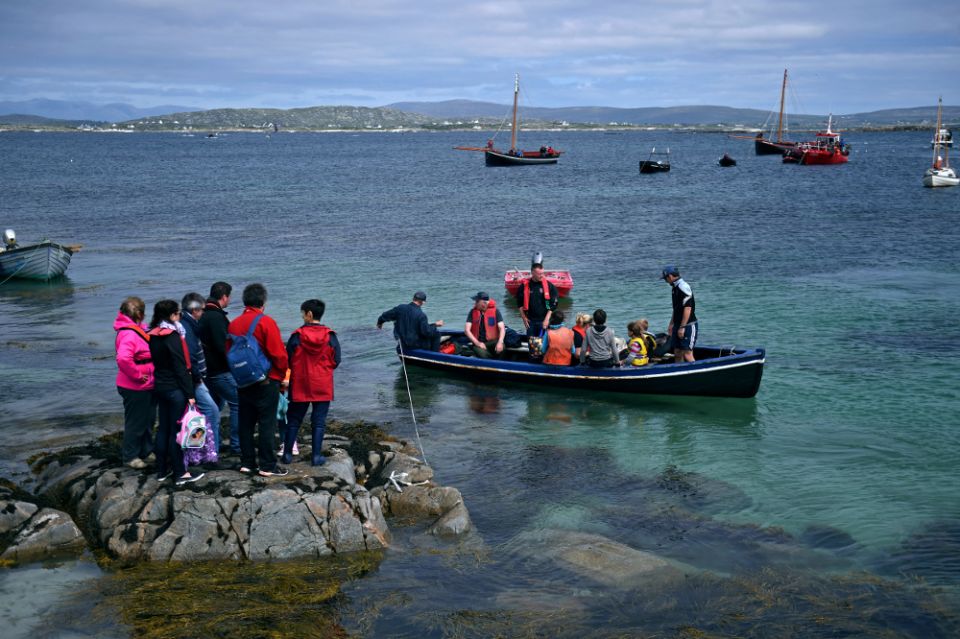 Seafarers and other worshippers from Carna, Ireland, are seen in 2016 during the annual pilgrimage to MacDara's Island to celebrate Mass in honor of St. MacDara, patron saint of fishermen. Pope Francis has granted Apostleship of the Sea chaplains broader permission for granting absolution to those working far from home. (CNS/Clodagh Kilcoyne, Reuters)

Vatican City — Pope Francis gave priests who minister to seafarers special permission to grant absolution for sins that usually would require the intervention of a bishop or the Vatican itself.

"I want to say something about peace in one's heart," the pope said June 27 during a meeting with chaplains and volunteers of the Apostleship of the Sea working at European ports.

"Many seafarers come or will come to priest chaplains with problems on their conscience that make them suffer a lot because they have never had a chance to deal with them," the pope said, departing from his prepared text.

"Be merciful. Be merciful," Pope Francis told the chaplains.

"To help you with this mercy," he said, "I concede to all seafarer chaplains the same permissions that I gave to the 'missionaries of mercy' so that you can help many hearts find interior peace."

The "missionaries of mercy" were priests chosen by the Vatican for the 2015-2016 Year of Mercy to preach about God's mercy and, especially, to encourage Catholics to rediscover the grace of the sacrament of reconciliation.

In a permission later extended to all priests, Pope Francis granted them the power to absolve penitents who regretted having an abortion or playing a role in someone's decision to have an abortion. He also authorized them to lift some penalties imposed by canon law.

Through the chaplains and volunteers of the Apostleship of the Sea, the Catholic Church gives support and solace to a group of workers facing constant danger and frequent exploitation, Pope Francis told the group.

While sailors and fishermen deliver the goods people rely on every day, they face the seafaring dangers of storms and piracy, long periods of time away from their families and working conditions that are often harsh and low-paying, the pope told chaplains and volunteers working at ports across Europe.

"Without sailors, the global economy would come to a standstill; and without fishermen, many parts of the world would starve," the pope said.

Isolation and distance are not the only hardships seafarers face, he said. They also risk the "shameful experiences of abuse and injustice," including human trafficking and forced labor.

"At other times, they are not paid their rightful salary or are left behind in distant ports," he said. "In addition to threats from nature — storms and hurricanes — they must face human threats, such as piracy or terrorist attacks."

Too often, he said, "they cross the world's oceans and seas, landing in ports where they are not always welcome."

But the Apostleship of the Sea and its Stella Maris centers at some 300 ports worldwide bring human kindness, material support and the Gospel, Pope Francis said.

"With compassion and discretion, you give them a chance to pour out their hearts," he said. "This is the first and most precious service that you provide, above all to those who have few similar opportunities."

"Listening can then lead to action," both for spiritual healing as well as for defending the rights of workers who often are invisible to the larger society, the pope said.

The presence of chaplains and volunteers at ports around the world is "a sign of God's fatherhood and the fact that, in his eyes, we are all children, brothers and sisters to one another."