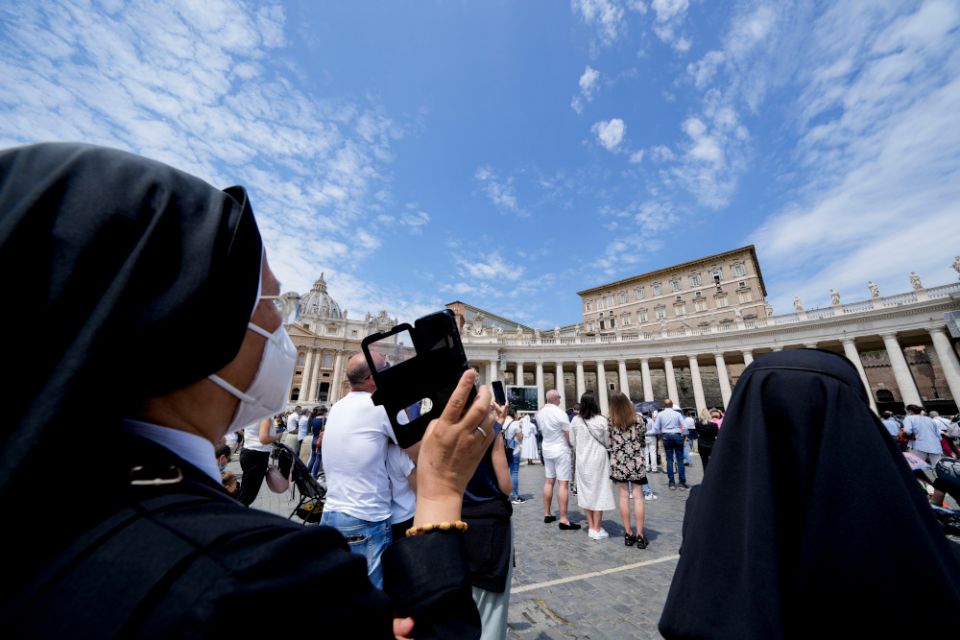 A nun takes pictures as Pope Francis recites the Angelus noon prayer from the window of his studio overlooking St. Peter's Square, at the Vatican, Sunday, May 30, 2021. (AP Photo/Andrew Medichini)

Vatican City — Pope Francis has invited representatives of Lebanon’s Christian community to the Vatican on July 1 for a day of prayer and reflection “about the worrisome situation in the country.”

Francis announced the encounter during his Sunday noon blessing, saying the aim was to “pray together for the gift of peace and stability." He asked for prayers ahead of the meeting and for Lebanon itself so the country can enjoy “a more serene future.”

Lebanon, a Mediterranean nation of 5 million, has the largest percentage of Christians in the Middle East and is the only Arab country with a Christian head of state. Christians make up a third of the population.

Lebanon has been enduring an unparalleled financial, economic and political crisis for months, which has been worsened by the coronavirus pandemic. Francis met in April at the Vatican with Prime Minister-designate Saad Hariri and urged all Lebanese political leaders to “urgently commit themselves to the benefit of the nation.”

Because of political deadlock, the country has been without a government since the Cabinet resigned days after a massive blast at Beirut’s port on Aug. 4, killing 211, wounding more than 6,000 and damaging entire neighborhoods.

In recent weeks, with foreign currency reserves dwindling at the central bank, Lebanon has been witnessing severe shortage in medicines as well as fuel, with people having to wait in line at gas stations to fill their cars. Electricity cuts last more than 12 hours a day.

Cardinal Bechara Rai, head of the Maronite Catholic church that is the largest in Lebanon, has criticized the country’s political class and urged them to quickly form a Cabinet to bring Lebanon out of its crisis.

“Excuses are not convincing anyone regarding delays in the formation of a government,” Rai said last week. “It looks like Cabinet formation is in a long vacation. The stalemate is a killing to the country and the people. It must stop.”

During his meeting with Hariri, Francis reaffirmed his desire to visit Lebanon as soon as conditions permit. The July 1 meeting, presumably, will be an opportunity for the pope to express his solidarity now, given that a visit in the near future isn’t possible.

According to Lebanon’s power-sharing system, the president has to be a Maronite Christian and the parliamentary speaker a Shiite Muslim, while the prime minister has to be a Sunni. Parliament and Cabinet seats are equally split between Muslims and Christians.

It wasn't immediately clear which representatives of Lebanon's Christian community would be coming to Rome.