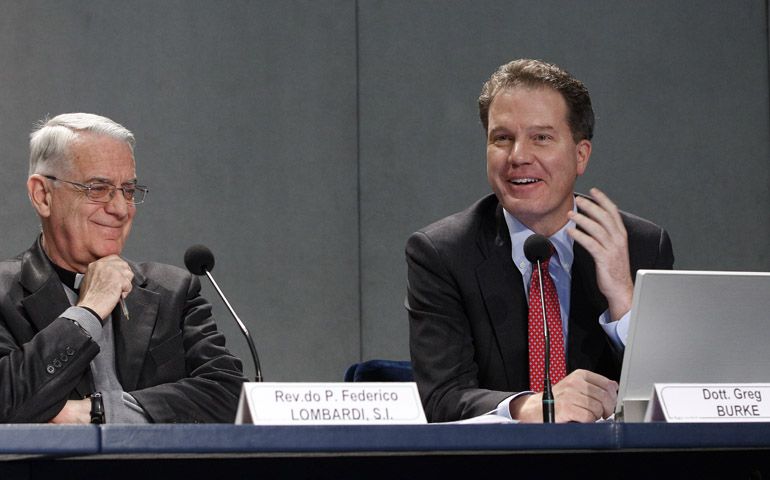 Vatican City — Pope Francis appointed a U.S. media adviser as the vice director of the Vatican press office and an Irish prelate known for revolutionizing the Vatican’s approach to social communication as bishop and adjunct secretary of the Pontifical Council for Culture.

Greg Burke, senior communications adviser to the Vatican Secretariat of State, was appointed by the pope Dec. 12 as the Vatican’s No. 2 spokesman. Burke will replace Passionist Fr. Ciro Benedettini, who served as the press office assistant director since 1995.

Shortly after the announcement, Benedettini was greeted with applause by journalists, who thanked him for his years of service.

"In a certain way, I am happy of this change, even though my heart weeps at leaving all of you and the personnel of the press office with whom I have worked for many years," he said holding back tears.

Wishing Burke well in his new role, Father Benedettini said that the change was a "sign of vitality" and "renewal" for the Vatican’s press office.

Burke, a native of St. Louis and member of Opus Dei, previously worked as the Rome correspondent for Fox News before his appointment in 2012 as the Vatican senior communications adviser.

Bishop-designate Tighe told Catholic News Service his reaction to the appointments was "surprise" and "enthusiasm."

"It certainly was unexpected," he said. "It’s an honor but also a responsibility; it’s moving onto sacred territory that I’m still now absorbing."

The Council for Culture, he said, plays a crucial role in the church’s engagement with contemporary society, an area of interest he is “really looking forward to and learning to do.”

Bishop-designate Tighe said his experience at the Pontifical Council for Social Communications will help guide him in understanding his new role.

Vatican shuts down fountains as Rome deals with drought