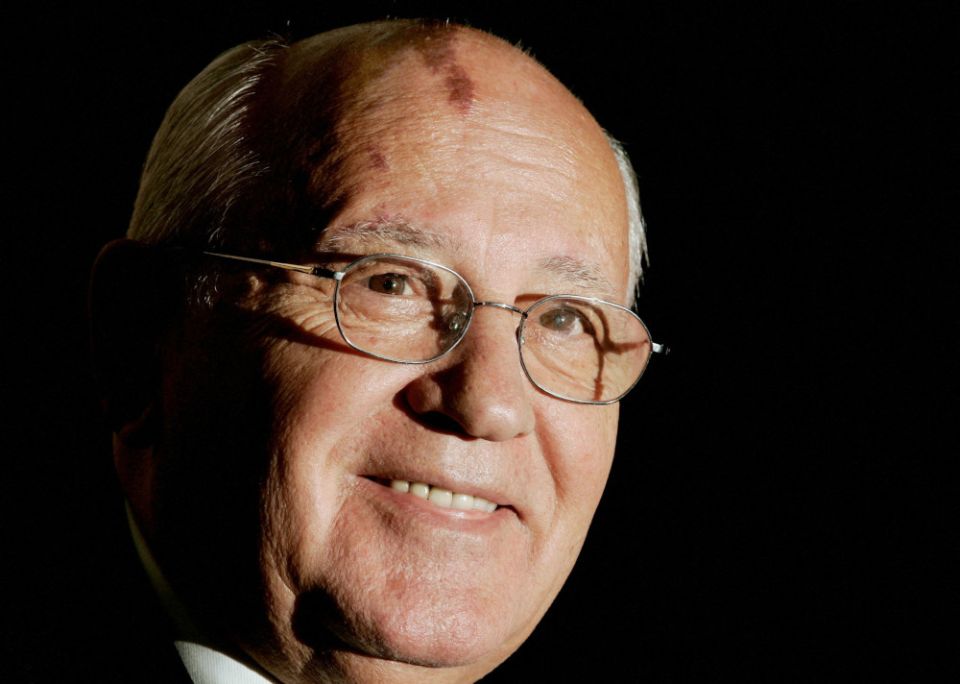 Soviet leader Mikhail Gorbachev smiles during a meeting in Washington Oct. 21, 2005. Pope Francis offered his prayers and praise for Gorbachev, 91, who died in Moscow Aug. 30, 2022, after a long illness. (CNS photo/Jim Young, Reuters)

Vatican City — Pope Francis offered his prayers and praise for former Soviet President Mikhail Gorbachev, who died at age 91 Aug. 30 in Moscow after a long illness.

In a telegram sent to Gorbachev's only child, Irina Virganskaya, the pope conveyed his "heartfelt condolences" to her, all family members and those "who saw him as an esteemed statesman." The Vatican published the telegram Aug. 31.

The pope expressed his spiritual closeness during "this moment of sorrow for the death of your honorable father, Mikhail."

"Recalling with gratitude his far-sighted commitment to harmony and fraternity among people, as well as to the progress of his own country during an era of important changes," the pope offered his prayers of suffrage, "invoking eternal peace for his soul from the good and merciful God."

Gorbachev was known for his policies of "glasnost" (openness) and "perestroika" (restructuring) that set the stage for the breakup of the Soviet Union and the return of religious freedom.

He played a pivotal role in ending the Cold War of long-standing tension between the United States and the Soviet Union as well as the fall of the Iron Curtain that divided Europe into two separate political worlds of east and west.

He was awarded the Nobel Peace Prize in 1990 for playing a leading role in: promoting peace, particularly in replacing confrontation with negotiation; allowing many European nation states to regain their freedom; slowing down the arms race; and supporting arms control and disarmament, according to the Norwegian Nobel Committee.

He remained active in foreign policy and stressed the need for political solutions over military action. He established the nonprofit Gorbachev Foundation in 1992 to address international socioeconomics and political studies, and in 1993 he founded the environmental organization Green Cross International.

At a news conference prior to a talk he gave at Benedictine University in Lisle, Illinois, in 1999, Gorbachev praised then-Pope John Paul II for working toward peaceful solutions to political tensions.

"The role of religion is very important," he said. "The pope has said the world needs a new policy and new world order. There (have) to be more humane, more just and more peaceful solutions."

Coming from a country where religion was virtually outlawed for the better part of the 20th century, Gorbachev explained in his talk that one of his first accomplishments was providing the freedom of religion, which he said was a right that had to be respected.

Under Gorbachev's leadership, the Soviet Union passed a freedom of religion law in 1990 that rolled back decades of communist restrictions on churches, including those against religious instruction and freedom of association. It legalized the 5-million-member Ukrainian Catholic Church and restored some of its churches and other properties.

Gorbachev said in his Benedictine University talk that all nations needed the principle of "glasnost," that is, candor in publicizing problems and weaknesses in society. "People have a right to know. It's a grassroots assurance of freedom of information. People need to be given a chance to know what is happening, to know what leaders stand for."

Europe would be able to address its problems and challenges if it is united -- on security, economy and trade issues and without a bias against the United States or Russia, he said in that address.

He cautioned against what he saw was a growing superiority complex among nations, which he termed dangerous if this complex is the basis for building a new world order.

"It is an illusion to believe that one nation is better than another," he said.