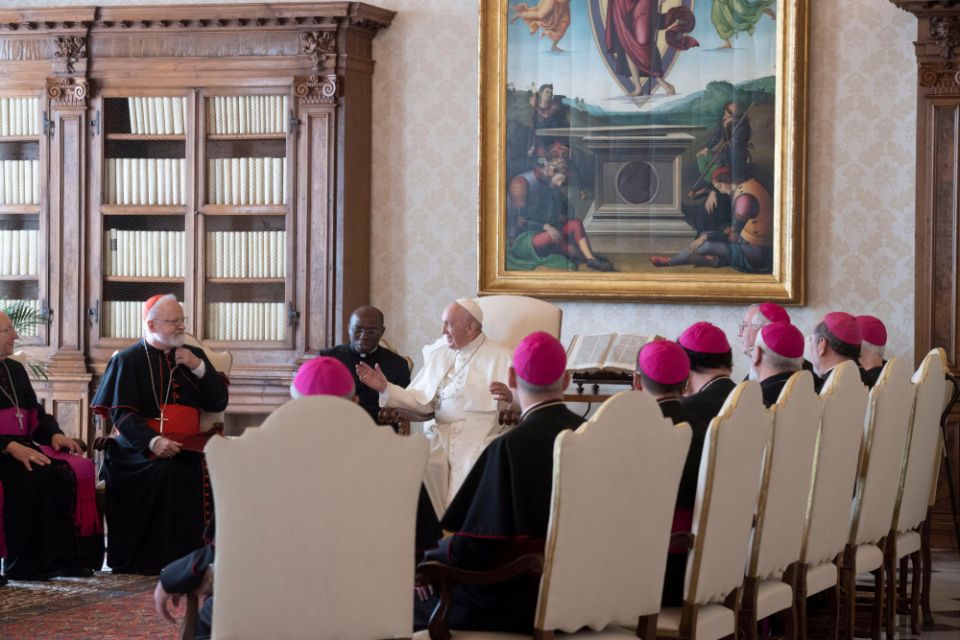 Pope Francis gestures as he speaks to Cardinal Sean O'Malley of Boston, second from left, alongside other U.S. bishops during their "ad limina" visits at the Vatican Nov. 7, 2019. (CNS/Vatican Media)

Vatican City — Bishops from New England shared with Pope Francis some of the joys, challenges and sufferings of the church in the Northeast and, really, throughout the United States, three of the bishops said.

Nearing the end of their "ad limina" visits to the Vatican to pray at the tombs of the apostles and report on the status of their dioceses, the bishops spent two hours Nov. 7 sitting in a circle in the papal library conversing with Francis.

Auxiliary Bishop Robert Reed of Boston told Catholic News Service later that the conversation included "the role of women in the church" and how to give them "a real seat at the table" when decisions are being made; immigration; priestly formation and the need for men preparing for priesthood in the United States to learn Spanish; the growth of secularism; and the importance of God's mercy and encouraging Catholics to avail themselves of the sacrament of reconciliation.

The pope allowed the bishops to set the agenda, he said, told them they should all feel free to speak "with no pecking order" and responded to their questions and concerns with reflections based on his own experience as a priest and bishop.

"I believe he offered that in a general way as the beginnings of a new way, a solution to the terrible difficulties we face in our society and in the church," he said.

At the end, Reed said, the pope told the bishops they must be courageous in their ministry. "At one point, he looked me right in the eye and my eyes filled up; this is the successor of Peter telling me as one of his bishops to be courageous."

Reed, who has been a bishop only three years, said he was a bit nervous going into the meeting with the pope.

"It was amazing. It truly was amazing," he told CNS. He was still carrying Francis' white zucchetto, which the bishop had asked for as a sign of papal closeness and prayer for his two parishes: St. Mary's and Blessed Sacrament in Walpole. Of course, he gave the pope a shiny new zucchetto in exchange.

"To be ushered into a room, given a chair in a circle for a true conversation with the successor of St. Peter after you've celebrated Mass just an hour before at the tomb of St. Peter himself is an experience I'll never forget," the bishop said.

The bishops of Massachusetts, Rhode Island, Connecticut, New Hampshire, Maine and Vermont – unlike almost all the other groups of U.S. bishops who will visit through February – stayed in "the pope's house," the Domus Sanctae Marthae.

"The pope, generally speaking, is there at breakfast, lunch and dinner, in line in front of you," Reed said. "It's quite a unique experience."

Bishop Frank Caggiano of Bridgeport, Connecticut, tweeted a thread of reflections about the meeting, noting how the pope "spoke from the heart" and "took great pains to make each of us feel both welcomed and comfortable. He even pointed out where the restroom was located, since he told us 'we're all human after all.'"

"It was a truly remarkable moment of grace that gave me great encouragement, challenged me to see some issues in a greater light and to be reassured in my own ministry as a bishop," he tweeted. 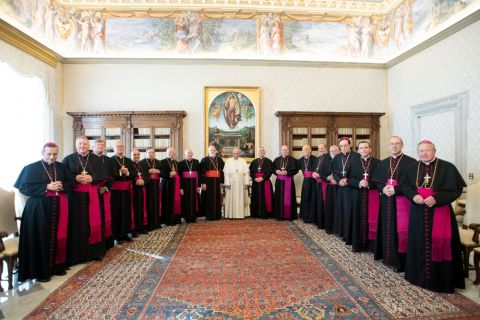 Pope Francis poses with U.S. bishops from New England during their "ad limina" visits at the Vatican Nov. 7, 2019. (CNS/Vatican Media)

"Overall, both with the Holy Father and with the Vatican offices, the dicasteries, there is certainly a little bit less formality" that in previous years, Tobin told CNS. Although "it was still very well organized."

In the meetings with the offices of the Roman Curia, he said, "I think I and all the bishops sensed a very strong feeling of welcome and of hospitality and a true commitment, true willingness to be of service."

"Every dicastery has said that 'We're here to serve you. How can we help you?' And I think that was pretty true previously as well, but it's a little bit more intentional now," he said.

"We get documents, we get statements, we get letters and correspondence, and it can be somewhat bureaucratic," said Tobin, but the visits allow the bishops to meet the people behind the documents. "The fact of meeting someone in person certainly softens the image we might have of the Vatican bureaucracy or of Rome or whatever."

One thing that has not changed in his years as a bishop visiting Rome, he said, "is the city of Rome itself. Maybe that's why they call it the Eternal City. There is a holy chaos that takes place here" with traffic and graffiti and noise.

"On the other hand, it's a place where clearly you feel the presence of the divine, the presence of the Spirit in the beautiful churches and the shrines and the history and the devotion to the saints and the people who are involved in the life of the universal church," Tobin said. "Clearly it's a spiritual experience and you feel, I think, spiritually uplifted and renewed, reinvigorated on a spiritual level."