Pope, recovering well, had 'severe' narrowing of his colon 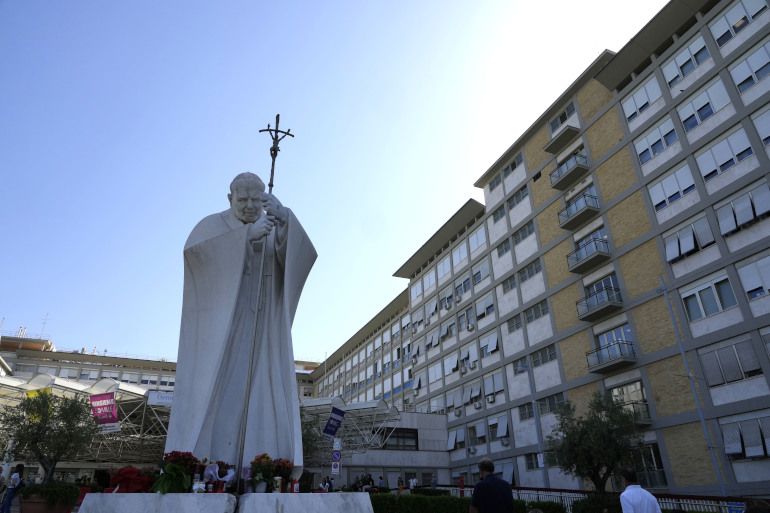 The statue of Pope John Paul II is seen at the entrance of the Agostino Gemelli Polyclinic in Rome, Wednesday, July 7, 2021, where Pope Francis was hospitalized Sunday. (AP Photo/Alessandra Tarantino)

Rome — Pope Francis’ recovery from intestinal surgery continues to be "regular and satisfactory," the Vatican said July 7, as it revealed that final examinations showed he had a suffered a "severe" narrowing of his colon.

The Vatican spokesman, Matteo Bruni, said the 84-year-old pope was continuing to eat regularly following his Sunday surgery to remove the left side of his colon, and that intravenous therapy had been suspended.

Francis underwent three hours of planned surgery Sunday. He is expected to stay in Rome’s Gemelli Polyclinic, which has a special suite reserved for popes, through the week, assuming no complications, the Vatican has said.

Among those offering get-well wishes was U.S. President Joe Biden, a Catholic who has cited Francis in the past. White House press secretary Jen Psaki said during a daily briefing Tuesday that the president "wishes him well and a speedy recovery."

Bruni said Francis appreciated all the prayers coming his way.

"Pope Francis is touched by the many messages and the affection received in these days, and expresses his gratitude for the closeness and prayer," he said.

Vatican | Pope, recovering well, had 'severe' narrowing of his colon

Pope urges respect for the life and dignity of migrants, refugees