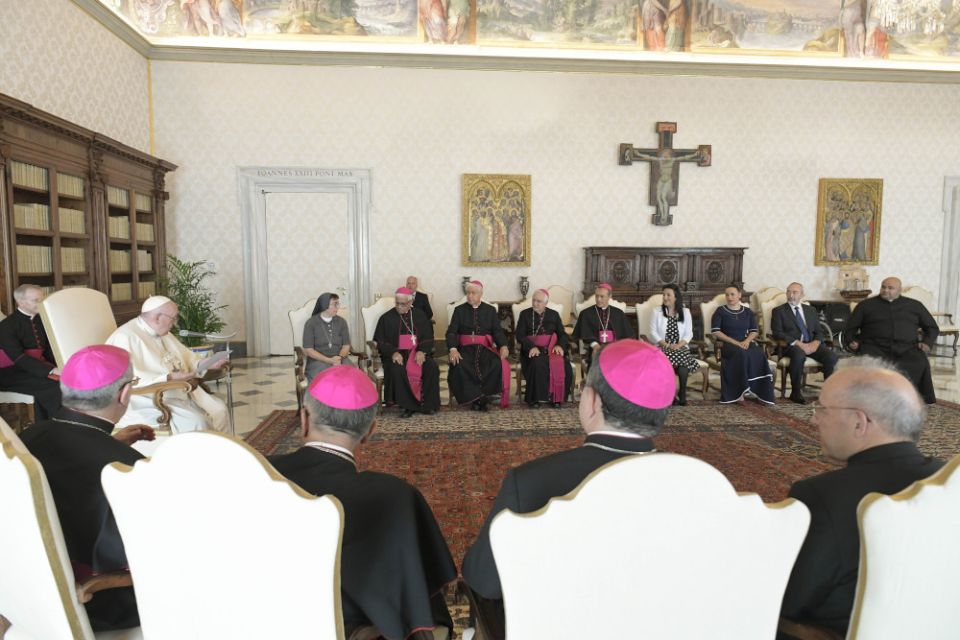 Pope Francis meets with members of the administrative council of the Populorum Progressio Foundation for Latin America and the Caribbean in the library of the Apostolic Palace at the Vatican Sept. 16, 2022. (CNS photo/Vatican)

Vatican City — Saying he wanted to promote even "stronger links" between the dioceses of Latin America and the Caribbean and the poorest people in their territories, Pope Francis ordered changes to the structure of a foundation established by St. John Paul II 30 years ago.

In its 30 years of operation, the foundation had distributed more than $40 million to projects in rural areas across the region. With individual grants of less than $25,000, the foundation focused on health care, housing, clean water, community infrastructure, agricultural development, starting small businesses and educating Catholics in the faith.

The objectives will remain the same, Francis told the council, but he had given the Latin American bishops' council, commonly known as CELAM, responsibility for helping study the grant applications and following the implementation of projects.

The president of the foundation had been the prefect of the Dicastery for Promoting Integral Human Development and the administrative headquarters was at the Vatican, although the operational center was in Bogota, Colombia, where CELAM is based.

While major funding for the projects was provided by the Italian bishops' conference and more recently the U.S.-based Cross Catholic Outreach, the dioceses of Latin America and the Caribbean also contributed.

Thanking everyone involved in the foundation over the past 30 years, Francis said that it "now changes its form but -- I want to emphasize -- maintains its mission and remains a work of the pope's charity."

"Many families in Latin America and the Caribbean survive in subhuman conditions," he said. "As we walk the synodal path, we must grow as a 'Samaritan' church that comforts, engages and stoops down to touch the wounds of Christ's suffering flesh in the people."

Jesus "wanted to identify himself with the poorest and most marginalized, and he offers us his merciful presence in them," the pope said.

"Our hope is that these solidarity initiatives show that change is possible, that reality is not stuck," he said. "If they are undertaken wisely and consistently, they will be a sign that we hope will motivate many."

But, the pope said, with the reform of the Roman Curia, "there is a need to promote greater links with the local churches in order to make integral development programs more effective in the most neglected Indigenous and Afro-descendent communities, plunged into misery and abasement."

"The poor must not be seen as recipients of charity," he said, but as partners in discerning needs and determining where funds should go.

Cardinal to religious: Those who abandon Vatican II are 'killing themselves'

Duterte to end martial law in Philippine south after 2 years