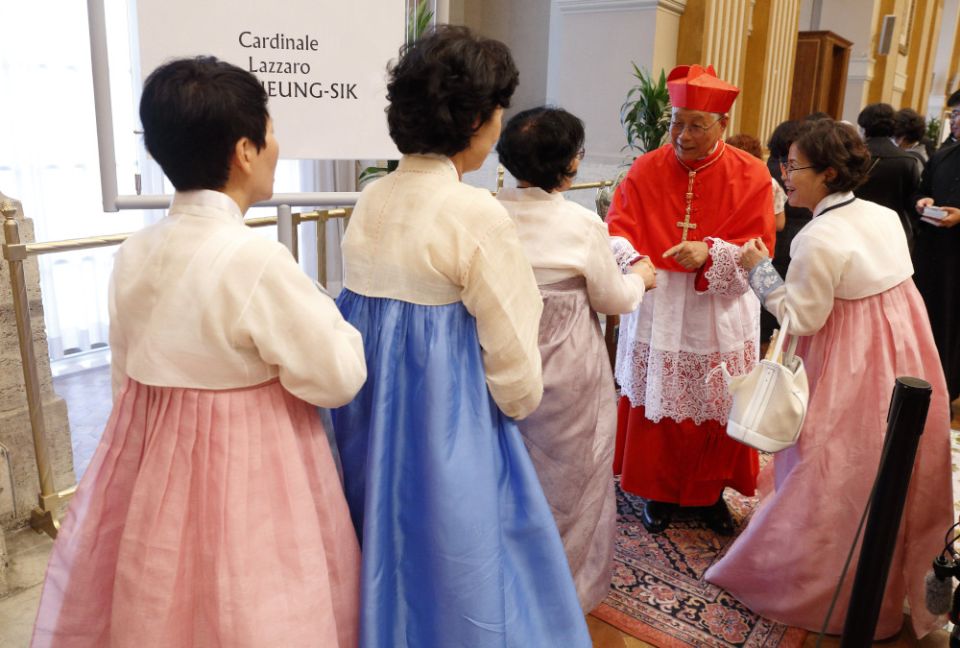 New South Korean Cardinal Lazarus You Heung-sik, prefect of the Dicastery for Clergy, greets guests at a reception after a consistory for the creation of 20 new cardinals at the Vatican Aug. 27 , 2022. (CNS photo/Paul Haring)

Rome — The Barque of Peter is currently floating along several currents.

Pope Francis' pontificate has brought about a renewed focus on pastoral theology, bringing the insights of the post-conciliar church in Latin America to the center of the universal church. It has placed concern for the environment at the heart of the church's social teachings, and reoriented the work of the Roman Curia, as embodied in the apostolic constitution Praedicate Evangelium. It has emphasized the church as the bearer of God's tenderness, rather than as a bastion of doctrinal clarity. And, perhaps most importantly, it has revived synodality as a means of church governance.

All of these have one thing in common: They are made necessary not only by the collapse of modern, post-modern, and post-post-modern cultural critiques or by the spiritual rot of clericalism, as exposed by the clergy sex abuse crisis. A functional rationale for these new approaches -- one that was on full display at the consistory on Aug. 27 -- is the globalization of the Catholic Church.

In the United States, we have been focusing understandably on the elevation of our own Cardinal Robert McElroy. At the consistory, the new cardinal who went up to Pope Francis to receive his red hat immediately before McElroy was Cardinal Filipe Neri António Sebastião do Rosário Ferrão, the Archbishop of Goa and Damão in India. Immediately following McElroy was Cardinal Virgilio do Carmo da Silva, the Archbishop of Dili in East Timor. Dili has a cardinal, but Milan and Venice do not. It is remarkable.

In his interview with NCR's Christopher White, McElroy acknowledged that American Catholics are not always good at globalization. He admitted U.S. church leaders "tend not to see ourselves as part of a global community very often."

After the formal event creating the new cardinals on Aug. 27, pilgrims from across the world had a chance to come meet the prelates in person. The most identifiable contingent was from the Diocese of Ekwulobia in Nigeria. The pilgrims who had come to celebrate the elevation of their bishop, Cardinal Peter Ebere Okpaleke, were all dressed in clothes made from a special red fabric for the event, which featured the image of the new cardinal on the front, and the flags of Nigeria and the Vatican on the back. In addition to the shared fabric design, these pilgrims had a shared exuberance, breaking into shouts and songs at and after the ceremony. Later, a percussion band from Ebere filled the piazza in front of the Holy Office with joyful drumbeats. 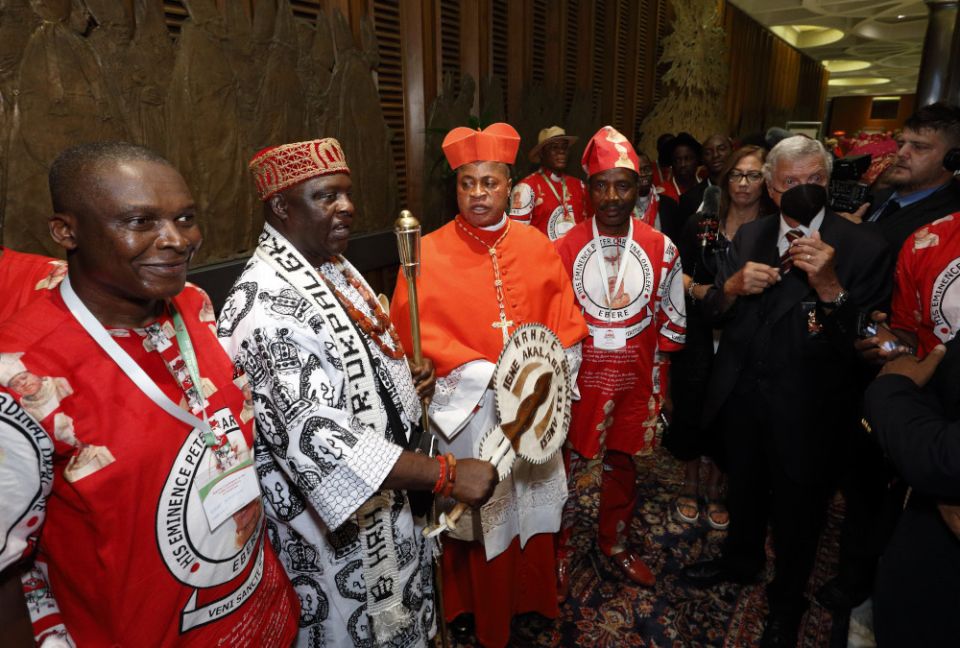 New Nigerian Cardinal Peter Ebere Okpaleke of Ekwulobia is pictured with guests at a reception after a consistory for the creation of 20 new cardinals at the Vatican Aug. 27, 2022. (CNS photo/Paul Haring)

Francis acknowledged this globalization in his address to the new cardinals. "Dear brothers and sisters, let us once more contemplate Jesus," the pope said. "He alone knows the secret of this lowly grandeur, this unassuming power, this universal vision ever attentive to the particulars." Globalization should never become homogenization.

Globalization is also not the same thing as multiculturalism. The vision is universal, built around a shared relationship with the Lord and a common inheritance of apostolic tradition. The objective is a shared communion, evident in the easy way the new cardinals mingled amongst themselves and with the other cardinals who had come for the ceremony.

This globalization is evident everywhere. The consistory was held in St. Peter's Basilica. After the ceremony, Vatican press officials corralled us journalists and brought us to the opposite side of the basilica via the stairs down to the crypt. In the twinkling of an eye, we were rushing past the confessio that holds the bones of St. Peter. There was no time to stop and take a photo of this most holy of sites in Rome. I thought to myself: There is a metaphor here. The work goes on, but it can never stray from its apostolic foundation which is also the goal of the work: Joining ourselves to the crucifixion and resurrection of the Lord.

The conservative critics of the Holy Father can sense that this globalization is changing the church, and doing so in ways that will make it harder and harder for them to maintain the always strange, and sometimes farcical, idea that what the Vatican and universal church really need is a healthy dose of Americanism. Do you remember George Weigel's bizarre suggestion that English become the working language of the Vatican?

Or, Napa Institute founder Tim Busch's vision of a new version of Catholic social teaching anchored in his libertarian ideas? "We can be the teaching pulpit for the American church, but also the teaching pulpit for the Vatican and for the global church," Busch told a 2017 Catholic University gathering. "We can be that. And we will be that going forward, especially on the issues and topics of business."

Alas, for them, Francis, is firmly in control and shows no signs of slowing down. The globalization to which he is committed is not baptized Pax Americana. Instead it is rooted in synodality, which is why the critics are now so keen to attack the global process for the 2021-23 Synod of Bishops. They do not fear it will fail. They fear it will succeed. Every curial official with whom I have met has spoken about the synodal process and how it is bringing new vigor to the life of the church.

Watching the cardinals and pilgrims from around the world join in easy camaraderie and poignant prayer in Rome, it was clear as day that Francis' vision is taking root.