Trip to Greece is humanitarian, not political, Vatican spokesman says 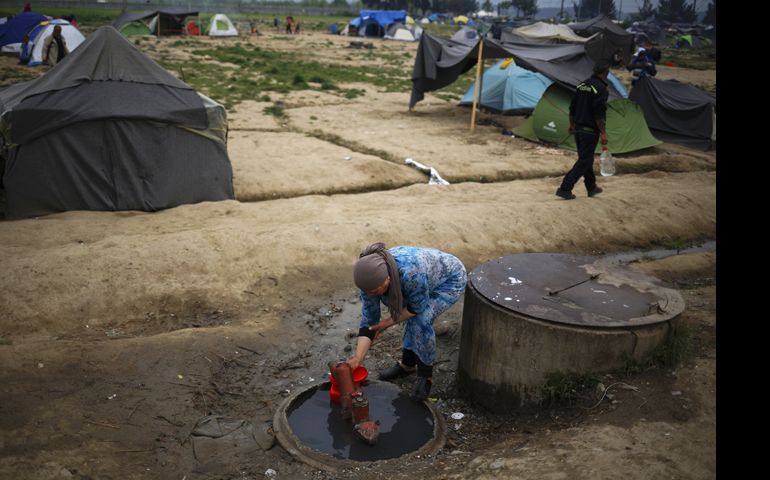 A woman collects water at a makeshift camp for migrants and refugees at the Greek-Macedonian border near the village of Idomeni, Greece. (CNS/Stoyan Nenov, Reuters)

Vatican City — In a "humanitarian and ecumenical gesture," not a political one, Pope Francis was to join Orthodox leaders in personally meeting with hundreds of refugees and migrants stranded in Greece, the Vatican spokesman said.

Releasing the detailed schedule for the pope's trip April 16 to Lesbos, Greece, Jesuit Fr. Federico Lombardi, Vatican spokesman, said the pope and the Orthodox leaders wanted to draw attention to "a situation in which many people are suffering" and where a "solution worthy of the human person" still must be found.

Francis was to make the trip with Ecumenical Patriarch Bartholomew of Constantinople and Orthodox Archbishop Ieronymos II of Athens and all Greece.

The three were scheduled to visit the Moria refugee camp, which the European Union has designated as a "hotspot" for registering those seeking asylum in Europe and from where those whose applications are denied are sent back to Turkey, which was their last stop before entering Greece and, therefore, EU territory.

Lombardi said the religious leaders would be welcomed to the camp by 150 children, including orphans and unaccompanied minors. They also were scheduled to greet personally 250 of the roughly 2,500 asylum-seekers currently at Moria.

The visit of the three religious leaders was to culminate with a prayer service on the waterfront in memory of those who have drowned trying to cross to Europe. According to the International Organization for Migration, more than 150,000 migrants and refugees arrived in Greece between Jan. 1 and April 7; more than half of them landed on Lesbos. In the same period, the IOM said, 366 people died attempting crossing the Aegean Sea to the island.

Here is the complete schedule released by the Vatican April 14. All times are local, with Eastern Daylight Time in parentheses: