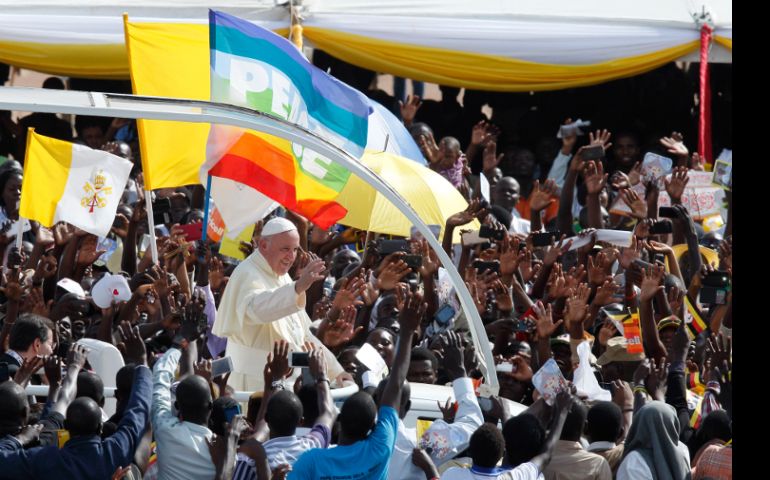 The Vatican flag and a peace banner are seen as Pope Francis greets the crowd as he arrives for a meeting with young people at the Kololo airstrip in Kampala, Uganda Nov. 28. (CNS photo/Paul Haring)
This article appears in the Francis in Africa 2015 feature series. View the full series.

KAMPALA, Uganda — In four back-to-back events filled with festive dancing and jubilant crowds Saturday, Pope Francis movingly called on Ugandans to take up the example of their Christian martyrs of a century ago to build a more just society, to transform suffering into good, and to never forget the poor.

At the center of the day were visits to separate Anglican and Catholic shrines to 19th century martyrs, who were burned alive for their faith under a persecution by a local king.

Celebrating an open-air Mass amid a gathering of an estimated 300,000 outside the Catholic shrine, Francis called upon the martyrs -- 23 Anglicans and 22 Catholics -- to say that Christians are called to “carry on their witness to Christ … whether we never leave our homes or we go to the farthest corner of the world.”

The example of the martyrs “gives purpose to our lives in this world,” the pontiff said at the homily during the Mass, speaking to crowds that had waited overnight in Centenary Park in Namugongo, about ten miles from Kampala.

The martyrs’ example, the pope said, “helps us to reach out to those in need, to cooperate with others for the common good, and to build a more just society which promotes human dignity, defends God’s gift of life and protects the wonders of nature, his creation and our common home.”

Francis was speaking Saturday as part of his Nov. 25-30 visit to three African countries, which started in Kenya and will continue on to the Central African Republic on Sunday. He came to Uganda specially to celebrate the 50th anniversary of the 1964 canonization of the Catholic martyrs, coming a year late.

He was speaking to crowds at the Mass that had waited overnight to see him, holding signs and running alongside his pope-mobile as he arrived at the park. The atmosphere was overwhelmingly joyous. The liturgy was marked with a mix of western and African hymns, as well as liturgical dancing.

The pontiff started the day with a striking visit to the Anglican shrine, praying with Anglican bishops and those gathered outside to see him and spending time at a museum that graphically depicts the martyrs’ killing.

The pope appeared visibly moved while he viewed a life-size sculpture that depicts the torture of several of the martyrs and their burning, with pain clearly etched on his face. He knelt and spent a few minutes in prayer before the graphic rendering. Afterwards, he and an Anglican bishop offered a joint blessing to those gathered outside.

At the Mass outside the Catholic shrine later, Francis mentioned the Anglican martyrs, saying their deaths “testify to the ecumenism of blood.”

Later Saturday, the pope met with an estimated 150,000 young people at an air strip in Kampala, encouraging them to trust in Jesus and to look for ways to turn negative experiences into positive ones.

The pontiff was responding in his remarks there to two harrowing testimonies from young Ugandans: One who spoke about being kidnapped and tortured by the violent militant group The Lord’s Resistance Army (LRA), and another who was born and is living with HIV.

Describing his abduction by the LRA for three months in 2003 along with 40 other persons, Emmanuel Odokonyero described horrific stories of torture and murder during his time in captivity, saying he saw friends killed and that he himself was tortured near to the point of death.

But Odokonyero said his faith had brought him to forgiveness.

“To those who tortured us, I am glad my heart has found love, forgiveness, peace and joy,” he said. “They are all forgiven because Jesus Christ broke the power of death by suffering on the Cross.”

Winnie Nansumba, a 24-year-old, told Francis her HIV infection has made it hard for her to love others out of fear of having to explain her life, or of not being able to be loved in return.

“As young people let’s work together regardless of our status we need to adopt new practices and behaviors that will help each one of us play their role in the fight against HIV,” she said, speaking to those in the crowd. “Take charge of your life and know your status. HIV can be prevented and managed.”

Francis said that both Odokonyero and Nansumba had suffered negative experiences, but that Jesus can perform great miracles.

“Jesus experienced the most negative thing that has ever been experienced in history,” said the pope, speaking in Spanish and being translated into English by a monsignor. “He was insulted, rejected, and assassinated. And by our God, our father, he was risen. He can do the same in us in every single thing that we experience.”

The Lord’s Resistance Army is a rebel guerilla group led by the indicted war criminal Joseph Kony that has operated in northern Ugandan and several nearby countries. HIV/AIDS continues to be a serious health issue in Uganda, with the information service Avert indicating some 1.6 million people are infected in the country.

“The Gospel commands us to go out to the peripheries of society, and to find Christ in the suffering and those in need,” said the pope. “The Lord tells us, in no uncertain terms, that is what he will judge us on!”

With the priests and religious, Francis again spoke off the cuff, asking the clergy not to forget the witness of the martyrs, to have fidelity to their own vocation, and to continuously pray.

“If a religious, a priest stops praying because he or she has too much work, then they have begun to lose their memory and to lose their fidelity,” said the pontiff. “Prayer also means humiliation, humiliation to go regularly to the confessor to confess your own sins.”

“We can’t have a double life,” he said. “If you are a sinner, ask for forgiveness.”

The pope is scheduled to leave for the Central African Republic early on Sunday, for a visit that has been marked in anticipation by many security concerns.

Despite a 2014 ceasefire between largely Muslim and Christian armed factions there, violent skirmishes have continued. Whether Francis would continue with the full schedule for the trip -- with 12 events in just over 24 hours in the country -- was unknown even up to Saturday afternoon.

The country is currently being led by a transition government, which is supposed to facilitate new elections for a permanent government in December.

According to the scheduled plan, the pontiff is to meet with the head of the transition government upon landing in the capital of Bangui Sunday morning. He is then set to visit a refugee camp and meet with young people.

The likely most dangerous part of the trip is set for Monday morning, when the pope is supposed to visit a mosque in the city’s most Muslim neighborhood. Given the recent violence between religious groups in the country, the journey of a Christian leader there has raised some concerns.

In one promising sign for the trip, the international Community of Sant’Egidio announced Saturday that all of the Republic’s presidential candidates had met for the first time that day with the group’s help to issue a joint statement of welcome to the pontiff before his arrival.