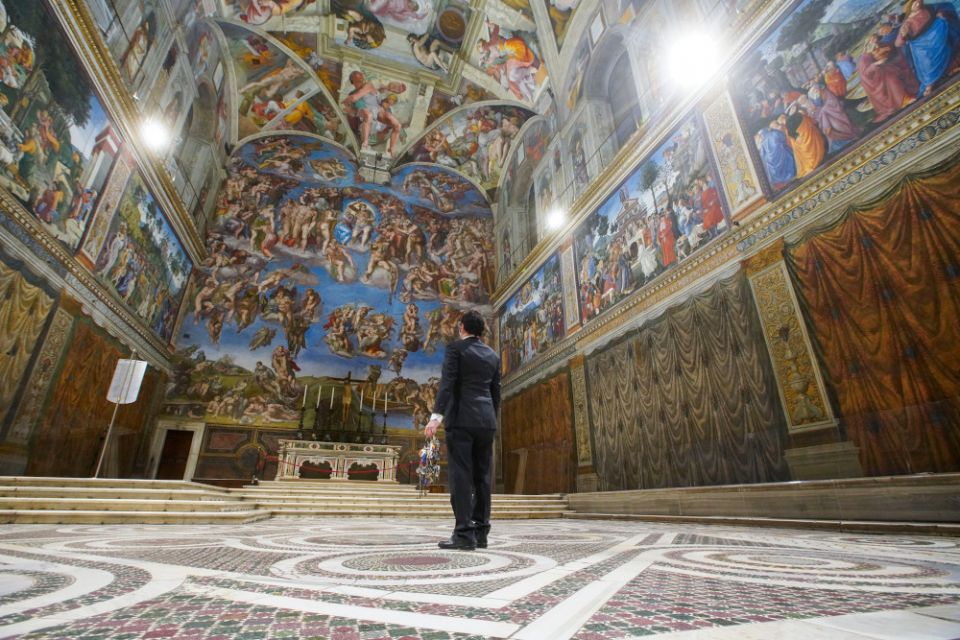 Gianni Crea, the Vatican Museums chief "Clavigero" key-keeper, walks through the Sistine Chapel as he opens the museum, at the Vatican, Monday, Feb. 1, 2021. Crea is the “clavigero” of the Vatican Museums, the chief key-keeper whose job begins each morning at 5 a.m., opening the doors and turning on the lights through 7 kilometers of one of the world's greatest collections of art and antiquities. The Associated Press followed Crea on his rounds the first day the museum reopened to the public, joining him in the underground “bunker” where the 2,797 keys to the Vatican treasures are kept in wall safes overnight. (AP/Andrew Medichini)

Vatican City — Following months of lockdown, the historic collection at the Vatican Museums reopened to the public last week but drew criticism from guides and visitors for the excessive crowds and lack of social distancing.

The Vatican Museums, which house one of the most well-known and largest art collections in the world, opened its doors on Feb. 1 following a hiatus of almost three months, the longest since World War II. Few people came to gaze at its famous paintings and sculptures in the first week, but the weekend leading up to Valentine's Day attracted large crowds to the museum.

While some tour guides criticized the lack of oversight and safety measures at the Vatican Museums, others said the problem was in in the lack of preparation by some tour guides and the fact that Roman citizens, used to enjoying art and culture in their daily lives, were left with only one museum to visit on the weekend.

"What I saw made me feel deeply ashamed," wrote tour guide Vincenzo Spina, who led a small group in the Vatican museum on Feb. 13, in a long open letter to the curators.

"It was a havoc of people, in total disregard for the most basic global laws [not Italian or European, but universal] to limit Covid-19. No distancing, no organization, pure folly: scenes of individual and collective hysteria, primordial chaos, shock and fear among visitors," Spina wrote.

The Italian tour guide accused the Vatican Museums of being more interested in selling tickets rather than ensuring the safety of visitors. He also criticized museum curators for not taking the necessary precautions to avoid chaos.

Visitors also took to online platforms to voice their discontent with the crowded conditions at the Vatican Museums last weekend. Some visitors likened the art galleries to "a circle of hell" and condemned the "unacceptable organizational error" by museum curators.

While in Italy the law only allows museums to stay open Monday through Friday, the Vatican Museums follow the regulations of the Vatican City State, which allows weekend openings from 8:30 a.m. to 6:30 p.m. The opportunity to enjoy great art and have a date outside the home led to the large crowds occupying the halls of the museum.

The director of the Vatican Museums, Barbara Jatta, called the opening of the museums a "day of celebration and happiness" in an interview with an Italian news agency on Feb. 1. She told journalists the museums had used the time of closure to restore and maintain the numerous pieces of art and architecture in the museums.

Jatta explained that the museums imposed mandatory online reservations to restrict the number of visitors and put "safety measures in place" to limit the spread of the pandemic; COVID-19 numbers in Italy have been decreasing. She also said that since travel restrictions don't allow people from far away to visit the museums, they expected only visitors from Rome and the surrounding Lazio region.

Responding to criticism in a later interview with the publication Ansa, Jatta emphasized the "situation wasn't that dramatic" and stated she was also at the museums on Feb. 13.

"There were some ridiculous complaints by some guides, who first complained about the closure and then, after 88 days of forced closure, complain about reopening," Jatta said, criticizing Spina for acting imprudently during the guided tour of the museums.

Other guides stepped in to defend the Vatican Museums from mounting criticism. "The situation was grossly exaggerated" said Isabella Ruggiero, President of the association for accredited tour guides, or AGTA, in a phone interview with Religion News Service on Feb. 16.

Ruggiero said the Roman visitors spent a longer time on the artwork than usually allowed, adding the chaos at the center of current debates didn't last longer than one hour. "Obviously there might have been a mistake in determining how many people would have been in the main rooms at a given time," she said.

"But this proves how important it is to open all museums and cultural spaces during the weekend," she continued, praising the Vatican Museums for paving the way. "The solution is not to keep things closed; the solution is to open the doors with clear rules that are enforced."