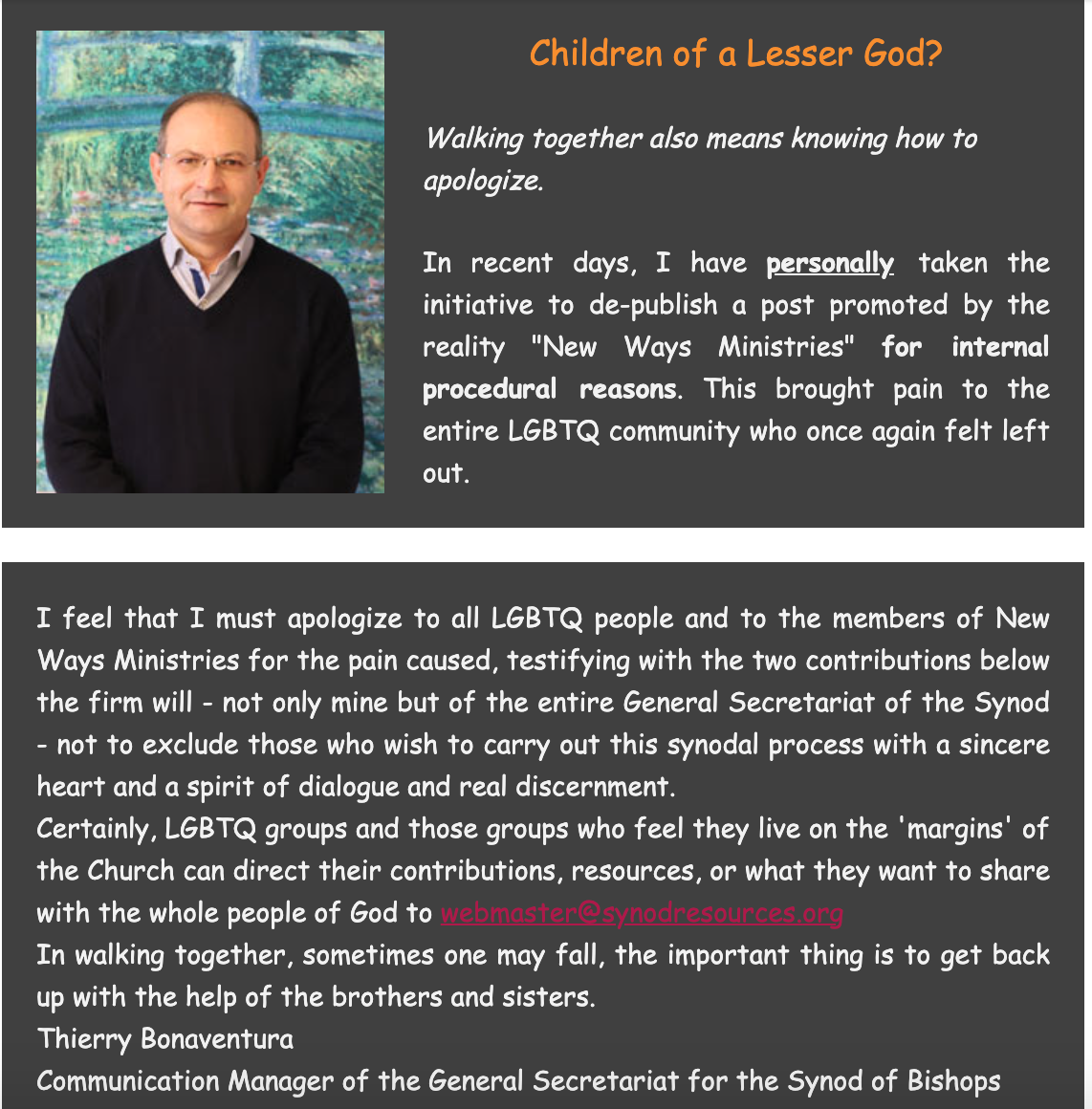 Editor's note: This story has been updated to add a statement from New Ways Ministry.

ROME — An official from the Vatican's Synod of Bishops' office has apologized for removing a link to a video by the Catholic LGBTQ outreach organization New Ways Ministries and reversed course by re-publishing the original video in question.

In a Dec. 12 newsletter, the synod's communication manager said he had "personally taken the initiative to de-publish a post promoted by the reality 'New Ways Ministries' for internal procedural reasons."

"This brought pain to the entire LGBTQ community who once again felt left out," wrote Thierry Bonaventura.

The reversal comes less than a week after the video, "From the Margins to the Center: a Webinar on LGBTQ Catholics and Synodality," was removed on Dec. 7 from the resources website for the 2021-2023 synod on synodality.

The 75-minute video featured an Oct. 24 webinar presentation by Fordham University theologian Robert Choiniere, who is also the director of adult formation at St. Francis Xavier Church in Manhattan.

According to conservative Catholic media reports, the video was removed after synod officials were informed that the U.S. Conference of Catholic Bishops had censured New Ways Ministry in 2010 for its support of civil marriage for same-sex couples.

As NCR first reported on Dec. 8, following the video's removal, New Ways Ministry revealed that Pope Francis, in a series of written correspondence, had commended the organization for its outreach to the LGBTQ community. The pope also referred to one of its co-founders, Loretto Sr. Jeannine Gramick, as "a valiant woman" who had suffered much for her ministry.

"I feel that I must apologize to all LGBTQ people and to the members of New Ways Ministries for the pain caused," wrote Bonaventura​ in the official newsletter for the General Secretariat for the Synod of Bishops.

He went on to express the "firm will" of "the entire General Secretariat of the Synod," along with his personal committment, "not to exclude those who wish to carry out this synodal process with a sincere heart and a spirit of dialogue and real discernment."

Along with restoring the video to the website for synod resources, the video was included in the synod newsletter. Bonaventure also invited LGBTQ groups and others who "feel they live on the 'margins' of the Church" to share their materials with the synod office.

"In walking together," Bonaventura concluded, "sometimes one may fall, the important thing is to get back up with the help of the brothers and sisters."

On Dec. 13, New Ways Ministry welcomed the apology and said they would continue their efforts to encourage LGBTQ involvement in the synod process.

"This unprecedented apology from a Vatican office corrects the earlier mistake and amplifies, even louder, the welcome that Pope Francis has extended to LGBTQ people. God indeed works in mysterious ways, turning what could have been great harm into an instrument of greater connection," wrote DeBernardo. "The synod office has now created a special channel for LGBTQ people to share their stories.  Every diocese should follow this example and set up their own channels of communication with LGBTQ communities."

In particular, DeBernardo singled out Bonaventura, saying "His actions are an example of the amazing grace which can be brought to life when one practices honesty and humility, and is concerned about how one’s actions may harm other people."

"For their own part, LGBTQ people can respond to the Vatican’s apology and correction by participating in synod consultations and sharing the journeys of their lives and their faith," DeBernardo said. "The church will benefit greatly by LGBTQ involvement."