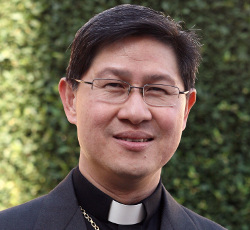 Despite reports to the contrary, sources say there’s no particular Vatican concern about the new archbishop of Manila, the Philippines, over an article he contributed more than a decade ago to a controversial history of the Second Vatican Council. The article had not been part of the official documentation considered before his appointment.

Luis Antonio Tagle, 54, seen as one of the leading theological minds among the Asian bishops, was installed as the 32nd archbishop of Manila Dec. 12, after being named to the position by Pope Benedict XVI on Oct. 13.

Though Tagle has been hailed as a rising Asian star and even a possible papal contender, a mid-November article by veteran Italian journalist Sandro Magister suggested that some in the Vatican may have second thoughts, related to an article Tagle authored for a history of Vatican II edited by Italian scholars Giuseppe Alberigo and Alberto Melloni, exponents of a progressive current in Italian Catholicism known as the “Bologna school.”

The Alberigo and Melloni history has been blamed in some quarters for promoting a distorted reading of Vatican II as a “rupture” with previous eras of church history -- as opposed to the “hermeneutic of reform,” emphasizing continuity with the church before Vatican II, promoted by Benedict.

Tagle earned his doctorate at The Catholic University of America under Fr. Joseph Komonchak, the American editor of the Alberigo and Melloni history, and joined the project’s editorial team while a seminary professor. In 1999, Tagle contributed an essay to the fourth volume of the history on Vatican II’s so-called “Black Week,” which unfolded at the close of the council’s third session in 1964, when several actions by Pope Paul VI caused alarm among reform forces.

Magister wrote that the cardinals and bishops who approved Tagle’s move to Manila learned of his connection to the Bologna school “only after the publication of the appointment,” because his essay on the “Black Week” was not part of the official ponenza, meaning the Vatican documentation supplied about candidates for bishops’ jobs.

Some commentators have suggested the revelation might induce Benedict to omit Tagle from the list of new cardinals when he next holds a consistory, widely expected in February.

Yet a source close to Canadian Cardinal Marc Ouellet, the Vatican’s prefect for the Congregation for Bishops, told NCR this week that Tagle has Ouellet’s “full support,” even after the 1999 essay came to light. That support is telling, given that Ouellet is a protégé of Benedict.

Several observers said that tensions over the Bologna school are viewed in the Vatican as largely an intra-Italian rivalry to which Tagle, as an Asian prelate, is seen as mostly extraneous.

Speaking on background, one Vatican official said that he read Tagle’s 1999 essay after media reports highlighted it and found nothing objectionable. In fact, this official said, he was impressed by Tagle’s defense of Paul VI. (Tagle wrote that Paul followed a strategy of “listening to all views, especially opposing ones,” and was willing to “sacrifice his personal popularity to save the council and its future.”)

This official also said it’s hard to suggest Tagle is opposed to Benedict’s reading of the council, since one of the sources Tagle cited was the writings of Joseph Ratzinger.

Another official stressed that Tagle was not made a bishop until 2001, and what counts more in the Vatican analysis is his record since. Importantly, this official said, Tagle has helped articulate Catholic opposition to the proposed Reproductive Health Bill in the Philippines, which would promote birth control and mandate sex education in schools.

Last year, Tagle used his weekly television program, “The Word Exposed,” to object that the proposed sex education curriculum promotes a merely “biological” view of sexuality, as opposed to a view that includes morality.

During his Dec. 12 installation Mass, Tagle said he wants humility and “loving discipleship” to be the guideposts of his ministry as the leader of Manila’s estimated 2.8 million Catholics. (Its total Catholic population of 75 million makes the Philippines the third-largest Catholic country in the world, after Brazil and Mexico.)

“Merely assuming the position of archbishop of Manila does not guarantee that I will recognize the Lord. If I am not careful, it might even blind me to the Lord and others,” Tagle said. “It is rather by being a humble disciple content with the love of Jesus that I would see the advent of him whose love propels us to mission. Love makes one a true shepherd, not position.”

On the Web
John L. Allen Jr's interview with Archbishop Tagle is available at ncronline.org/node/27222