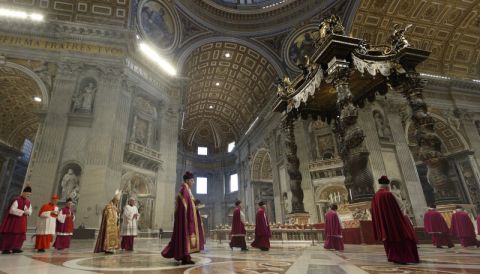 Rome — Vatican judicial authorities ordered the acquisition of documents and other materials from the office that manages the maintenance of St. Peter's Basilica, the city-state announced June 30, in an apparent sign of an investigation into how the office negotiates contracts with outside vendors.

In a brief statement, the Vatican press office said the confiscation of materials had included "documents and electronic devices" and was undertaken that morning by the city-state's auditor general under the authority of Vatican prosecutors.

Although the statement did not say exactly what the auditor general is investigating, it cited a new set of Vatican laws issued by Pope Francis June 1 regarding the negotiation of contracts for the purchase of goods, property and services for both the Roman Curia and the Vatican city-state.

The statement said Francis has also appointed Archbishop Mario Giordana, a former Vatican ambassador, to lead a new commission to "shine light" on and reorganize the administration of the office, known as the Fabbrica di San Pietro.

The June 30 acquisition of documents is the second such move by Vatican prosecutors in recent months, following an October raid on the offices of the Secretariat of State as part of an investigation over the city-state's controversial decision to invest in a development project in London.

On June 5, the Vatican arrested an Italian broker over his involvement in that deal. The broker, Gianluigi Torzi, is now out on conditional release but is facing charges of extortion, embezzlement, aggravated fraud and money laundering.

The Fabbrica di San Pietro is one of the Vatican's most storied offices, tracing its founding to before Pope Clement VII's 1523 creation of a group of architects and builders to advise the Vatican on the construction of the current St. Peter's Basilica, then in progress.

The office is responsible today for all the basilica's restoration and maintenance works. It is led by Italian Cardinal Angelo Comastri, who has served as its president since 2005 and as the archpriest of the basilica since 2006.

Francis' new laws for the Vatican's negotiation of contracts focus particularly on preventing the city-state from supporting organizations that use practices contrary to Catholic social teaching, and on ensuring that the contract bidding process does not allow for conflicts of interest or familial bias.

After a conclave that demanded reform, a year of 'fresh air'

Superpope to the rescue: T-shirt raises money for papal charity