Without forgiveness, humility, pope says in L'Aquila, then injustice, wars will rage 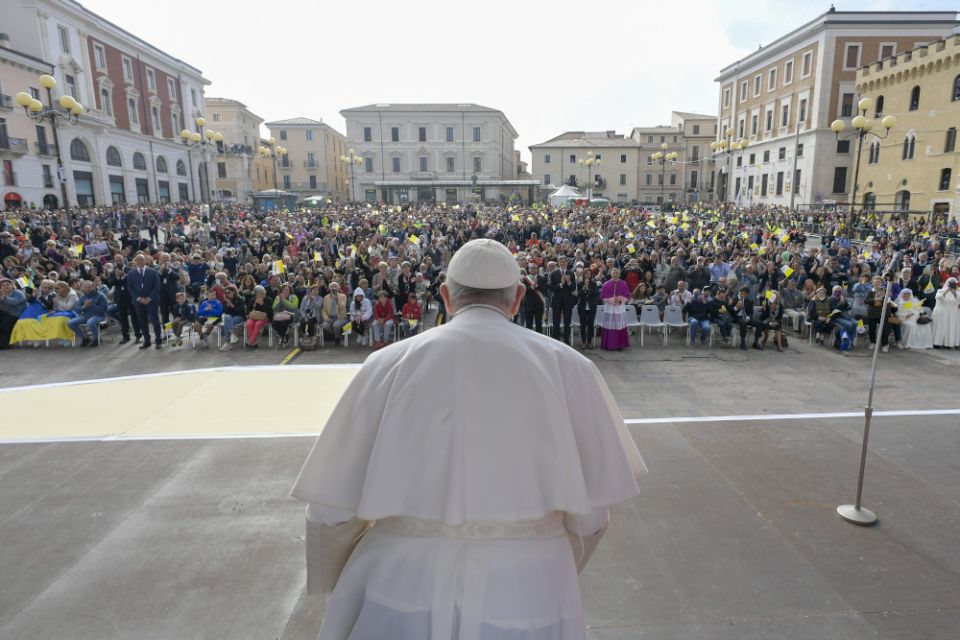 Vatican City — The world will keep witnessing wars, violence and injustice as long as people fail to understand that true freedom comes from seeking God's will, love and mercy, Pope Francis said.

Only when one's heart is filled with mercy can life be lived with joy, and when life is lived by humbly serving others can there be peace, the pope said in a homily during Mass celebrated in the central Italian city of L'Aquila Aug. 28. The Vatican broadcast the visit live online.

Christians are asked to live like Christ, who came to serve, not be served, the pope said, and in this way, they will also find true freedom.

As long as people fail to understand "that the revolution of the Gospel lies completely in this kind of freedom, we will continue to witness wars, violence and injustice, which are none other than an external sign of a lack of inner freedom," he said. It is this lack of inner freedom that leads to "selfishness, individualism, self-interest, abuse of power."

The pope arrived in the early morning by helicopter from Rome and visited the city's cathedral, which still has not been rebuilt after a deadly earthquake in 2009. He met with and gave an address to the city's residents to provide encouragement and comfort. The quake killed 309 people as they slept, severely damaged thousands of buildings and left more than 65,000 people homeless.

The pope's visit was also to help celebrate "the Celestine Pardon," which is held Aug. 28-29 every year and was established by St. Celestine V in 1294.

The 13th-century pope, who abdicated just a few months after his election, issued a papal bull on the granting of a plenary indulgence to everyone who visits the Santa Maria di Collemaggio basilica, goes to confession, receives Communion and prays for the intentions of the pope. The rituals and traditions of the celebration, recognized by UNESCO as part of the "Intangible Cultural Heritage of Humanity," underline the importance of forgiveness and peace.

Francis opened the basilica's holy door as part of the annual penitential rite and was the first pope to do so since 1294. He also prayed before the relics of St. Celestine, whose tomb lies inside the basilica.

In his homily at the Mass, Francis said St. Celestine's abdication was a sign of him saying "yes," not "no," as he was a humble servant who was seeking to choose to follow God's will.

"In fact, there is no other way to carry out God's will than by taking on the strength of the humble," he said.

The humble may appear "weak" or as "failures," he said, but "in reality, they are the real winners, because they are the ones who completely trust in the Lord and know his will."

In a world that is dominated by pride, "the Word of God invites us to be humble and meek," Francis said.

Being humble does not mean destroying or ignoring one's sense of self-worth, it is having a "healthy realism" that understands one's abilities and limitations, he said.

By humbly recognizing one's misery, one can then focus on God, "with whom all things are possible," he said.

Francis said St. Celestine left the city of L'Aquila and the world a gift by reminding people that it is only with mercy that "the life of every man and woman can be lived with joy."

"Forgiveness is the passage from death to life, from feeling anguish and guilt to feeling freedom and joy," he said.

He asked that the city and its basilica "always be a place where one can be reconciled and feel that grace that puts us back on our feet and gives us another chance. May it be a church of forgiveness, not just once a year, but always."

"In fact, this is how peace is built, through forgiveness that is received and given," the pope said.

The pope also prayed the Angelus after Mass with those gathered in front of the basilica. He prayed for those hit by a disastrous flood in Pakistan and appealed for "prompt and generous" international assistance.

He prayed for the intercession of Our Lady, so that "she might obtain pardon and peace for the entire world. Let us pray for the people of Ukraine and for all those who suffer because of war. May the God of peace revive a human and Christian sense of pity and mercy in the hearts of the leaders of nations. Mary, mother of mercy and queen of peace, pray for us!"

Vatican | Without forgiveness, humility, pope says in L'Aquila, then injustice, wars will rage

Cardinals: Election of Pope Francis a sign of unity

Beloved Amazonia: a love letter for the conversion of hearts