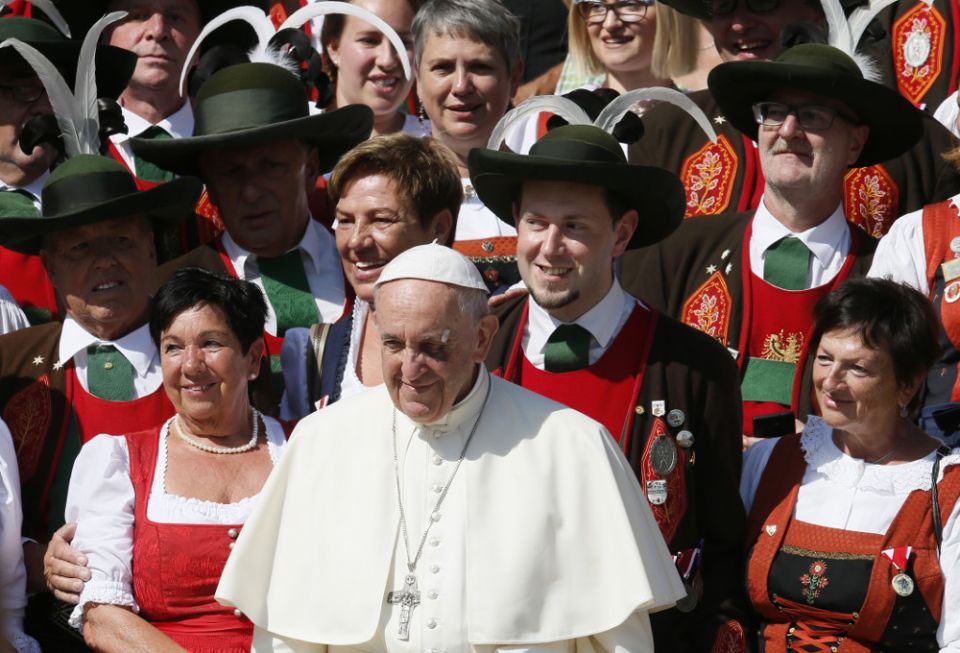 Pope Francis poses with a group in traditional attire during his general audience in St. Peter's Square at the Vatican Sept. 13. (CNS/Paul Haring)

Vatican City — Colombia's long and arduous path toward reconciliation and a lasting peace after nearly half a century of war is a sign of hope for all Christians, Pope Francis said.

Speaking to pilgrims Sept. 13 at his weekly general audience, the pope said the motto of his visit Sept. 6-10 — "Demos el primer paso" ("Let's take the first step") — referred to the process of reconciliation that, while difficult, is "underway with the help of God."

"With my visit, I wanted to bless the efforts of that people, confirm them in faith and hope and receive their witness, which is a wealth for my ministry and for the whole church," the pope said.

Although still sporting a black eye after a minor accident during his stay in Cartagena, the pope was in good spirits, greeting pilgrims and kissing babies around St. Peter's Square.

Among those present at the audience was former British Prime Minister Tony Blair, who briefly greeted Pope Francis at the end of the general audience.

Recalling Colombia's tragic 52-year armed conflict, which was responsible for the deaths of more than 220,000 people, the pope said that while the country was torn apart, its strong Christian roots "constituted a guarantee of peace, the solid foundation of its reconstruction and the lifeblood of its invincible hope."

"It is evident that the evil one wanted to divide the people to destroy God's work, but it is equally evident that the love of Christ, his infinite mercy is stronger than sin and death," he said.

Departing from his prepared remarks, Pope Francis recalled how mothers and fathers lining up along the popemobile's route would hold up their children to receive a blessing.

"I thought to myself that a people capable of making children and capable of letting them be seen with pride and hope, this people has a future," the pope said.

The second day of the trip, which included the beatification of two Colombian martyrs and an evening prayer service in Villavicencio dedicated to reconciliation, was "the culminating moment of the entire visit," the pope said.

The Sept. 8 prayer service featured a crucifix from a church in Bojaya, an image of Jesus without arms or legs after an improvised homemade mortar launched by rebels crashed through the roof of a church and exploded in 2002.

The Christ of Bojaya, the pope said, was "mutilated like his people."

The beatification of Bishop Jesus Emilio Jaramillo Monsalve of Arauca, who was murdered by Colombian Marxist guerrillas in 1989, and Fr. Pedro Maria Ramirez, who was killed at the start of the Colombian civil war in 1948, served as a reminder that peace is also founded on the blood of the martyrs who are witnesses love, truth, justice and faith.

"To listen to their biographies was emotionally tearful: tears of both pain and joy," the pope said. "In front of their relics and their faces, the holy people of God have felt strongly their own identity; with pain, thinking of many, too many victims, and with joy for the God's mercy which stretches forth upon those who fear him."

Saints like St. Peter Claver and St. Mary Bernard Butler, who ministered in Colombia, he added, are also examples for Christians in protecting the rights and dignity of all men and women.

Both saints, he said, "gave their life for the poorest and the marginalized and thus they showed the true path of revolution — evangelical not ideological — that truly frees people and societies from yesterday's and, unfortunately, today's slavery."

The encounter of mercy and truth as well as justice and peace prophesied in the Psalms, Pope Francis said, were fulfilled in Colombia's "wounded people," allowing them to "rise up again and walk in a new life."

"These prophetic words — full of grace — we saw incarnate in the stories of witnesses who spoke in the name of many and of many who, through their wounds, with the grace of Christ were able to come out of themselves and opened themselves to the encounter, to forgiveness and reconciliation," the pope said.

Vatican | Witness of Colombian people a wealth for the church, pope says