After attacks, New Zealand bishops tell Muslims: 'We hold you in prayer' 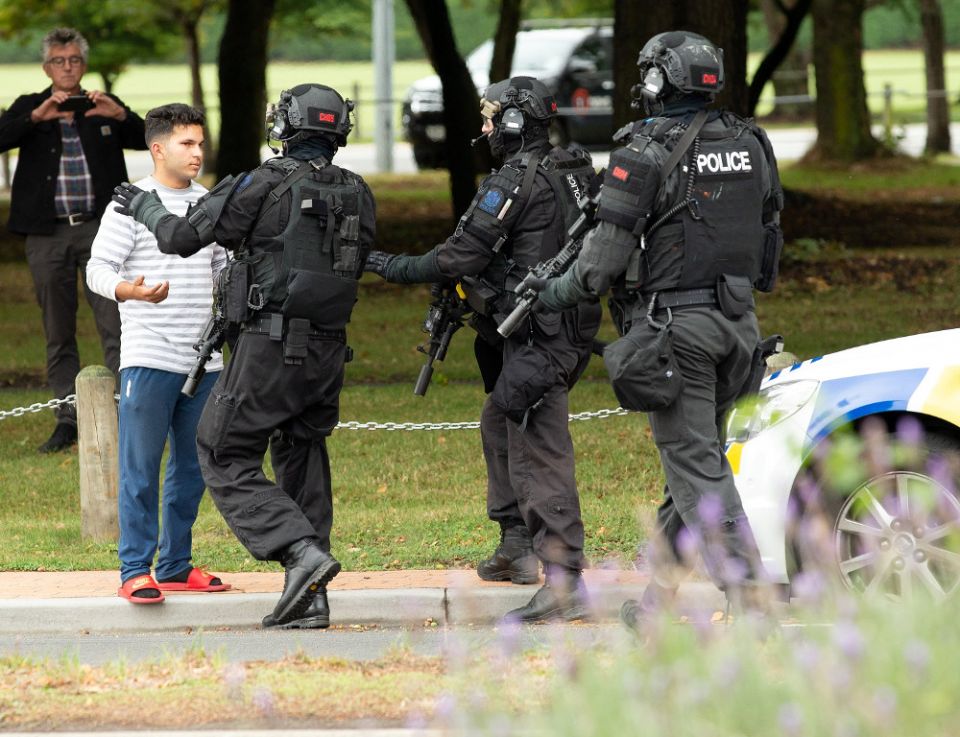 Members of a SWAT team push back members of the public following a shooting at the Al Noor Mosque in Christchurch, New Zealand, March 15, 2019. New Zealand's Catholic bishops have expressed their horror and distress at terrorist attacks on two mosques in Christchurch; at least 49 people were killed. (CNS/Martin Hunter, Reuters)

The shootings took place at or near the Al Noor Mosque, where 41 people were killed, and at the Linwood Mosque, where 7 were killed. One more person subsequently died at Christchurch Hospital. Muslims had gathered at the mosques for Friday prayers. Some of those killed were children, it has been reported.

The terror attack started at around 1:40 p.m. local time March 15, sparking a massive mobilization by police. Mike Bush, New Zealand police commissioner, announced at 9 p.m. that a man in his late 20s had been charged with murder and would appear in the Christchurch District Court the next day.

Some three-and-a-half hours after the attacks began, the New Zealand bishops released a message, addressed to the nation's Muslim community, via social media.

"We hold you in prayer as we hear the terrible news of violence against Muslims at mosques in Christchurch," the bishops wrote.

"We are profoundly aware of the positive relationships we have with Islamic people in this land, and we are particularly horrified that this has happened at a place and time of prayer.

"We are deeply saddened that people have been killed and injured, and our hearts go out to them, their families and wider community. We wish you to be aware of our solidarity with you in the face of such violence."

The bishops signed off their message "Peace, Salaam."

A message sent by Cardinal Pietro Parolin, Vatican secretary of state, on behalf of Pope Francis, said the pope was "deeply saddened to learn of the injury and loss of life cause by the senseless acts of violence" at the mosques.

"He assures all New Zealanders, and in particular the Muslim community, of his heartfelt solidarity in the wake of these attacks." He also offered prayers and blessings to those injured, those grieving, those who died and emergency personnel.

"We are horrified at the violence that has been inflicted on people of our city this afternoon," Martin wrote.

"Words cannot convey our distress. Our prayers are with those who are suffering. I invite you now, wherever you are, alone or with family, workmates or friends, to pray together in the prayer of St. Francis of Assisi: Lord make me an instrument of your peace ... "

Martin planned to celebrate a Mass of prayer for peace, "remembering those who have died in the mosques tragedy and praying for those who are suffering," at St. Mary's Pro-Cathedral March 16.

This is the second major tragedy involving significant loss of life in Christchurch in the last decade. On Feb. 22, 2011, an earthquake struck the city, killing 185 people. The Catholic Cathedral of the Blessed Sacrament suffered severe damage, as did the nearby Anglican Cathedral.

Anglican Bishop Peter Carrell of Christchurch issued a statement on behalf of all church leaders in the city in early evening.

"Church leaders are absolutely devastated at the unprecedented situation in Christchurch this afternoon, and our hearts and prayers go to all involved. No religious organization or group deserves to be the target of someone's hate — regardless of beliefs. We stand for an Aotearoa New Zealand, which will never condone such violence. So, across the churches of Christchurch and Canterbury, we are praying for our Muslim brothers and sisters, for those injured and those who have lost loved ones, for the police, ambulance and other emergency services, and for all in the city of Christchurch who are feeling distress and fear due to this event. We are upholding you all in our prayers. We pray, too, for the shooter and their supporters, because for any person to do this, they must have such hatred in their hearts, such misalignment of the value of human life, that they too, need our prayer. We thank many others from around our nation and the world who are praying for peace in Christchurch."

Five Catholic high schools and about a dozen elementary schools in Christchurch city were among many schools that went into lockdown in mid-afternoon as news of the terror attacks spread. Children and staff were unable to leave the schools until 5:30 p.m., when enough police personnel had been deployed to ensure a safe passage home.

When the lifting of the lockdown, one Catholic high school, the all-girls Villa Maria College, stated on Facebook that rolls would be taken in the school gym and that students would be "debriefed with pastoral care on hand." After this, students were released.

The attack is the deadliest mass shooting in New Zealand's history. The gunman reportedly live-streamed video of the attack using a helmet-camera. New Zealand police asked people not to share this on social media. The shooter also posted a 73-page manifesto.

New Zealand Prime Minister Jacinda Ardern said: "It is clear that this can now only be described as a terrorist attack." She said the thoughts and prayers of the nation were with "those who have been impacted today."

The prime minister added: "For those of you who are watching at home tonight and questioning how this could have happened here. We, New Zealand, we were not a target because we are a safe harbor for those who hate. We were not chosen for this act of violence because we condone racism, because we are an enclave for extremism. We were chosen for the very fact that we are none of those things."

Mosques across the country closed on Friday at the urgings of police. Vigils sprang up throughout New Zealand as people gathered to mourn and grieve.

A meme on Facebook shared by many showed a sobbing kiwi.

Otto is editor of NZ Catholic.

World | After attacks, New Zealand bishops tell Muslims: 'We hold you in prayer'

Virus pushes US unemployment to highest since Depression

'Our only hope is in God': New Zealanders gather to pray after shooting