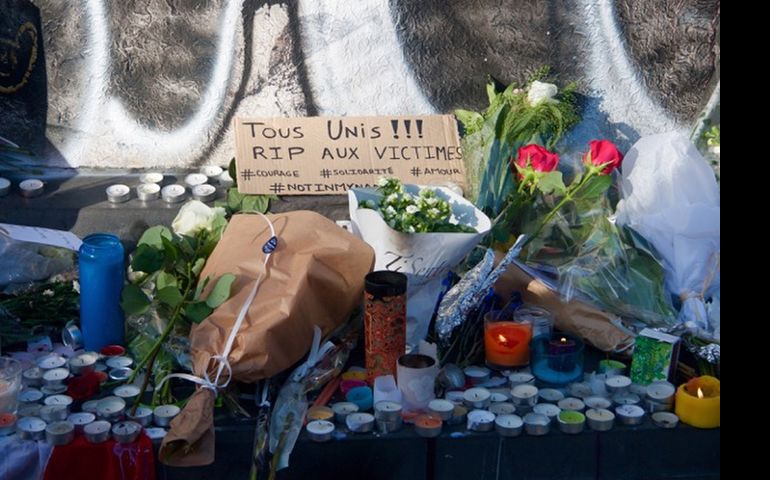 A memorial at the Place de la Republique in Paris Nov. 15. (CNS/Lucie Brousseau

Paris — On Sunday, Nov. 15, two days after the murderous rampage of Bataclan Theater and the attacks in the 10th and 11th districts here, Cardinal Andre Vingt Trois, archbishop of Paris, presided at a late afternoon Mass at the Notre Dame Cathedral, the famous shrine where the French meet in time of war or affliction.

He delivered a well-received sermon asking for tolerance and dialogue. The church was full and this ceremony was certainly a positive signal for the French Catholic community. However, several observers noticed that Muslims were not able to organize the same kind of celebration and that the malaise due to the attacks at the offices of Charlie Hebdo last January was not dissipated by the unanimous condemnation of the Nov. 13 events.

France hosts the largest Muslim community in Europe, about 5 million people. It means that this country is at the forefront of a large cultural and religious debate that will not spare other European countries nor America. However, the inheritance of a long history of religious conflicts has left its mark and it seems that France and its citizens will have to change their ways in a very significant manner to be able to cope with this new challenge.

Until World War II, the French Catholic church, despite its power and influence, had trouble adjusting to a political system that was adamant in rejecting any kind of collaboration with priests and bishops considered as hostile to the Republic and as being reactionary. After World War II, the situation changed drastically. A large Christian Democrat movement shared the government with other parties from left and right and state subsidies were permitted to go to the country’s numerous Catholic schools. This reconciliation between the church and the state, based on a common respect, seemed to put an end to a crisis which had started in 1789, at the beginning of the French Revolution.

The unforeseen growth of a Muslim population these last 50 years has put to the test the relationship between the government and the various religious communities, a question which is beginning to appear also in the political debates in the United States.

As compared to Catholics, Protestants and Jews, the Muslims suffer from severe handicaps in relating to the state. Their religion has no real credible organization. France tried to set up a national association of Muslims but the organization has limited influence and is split in various currents linked to foreign interests. Moreover, its clerical system lacks the organization of most other faiths and denominations. The imams who speak in the Mosques here are very often self-promoted and lacking in-depth education in religious matters. This near absence of central organization combined with a dramatic lack of money has very negative consequences. Foreign Muslim countries such as Morocco, Algeria or Turkey pay the imams and finance the building of mosques in an attempt to control the emigrants issued from their own countries.

This state of things is deeply dispiriting for the young people who want to practice their faith and improve their knowledge of the Koran. They are well aware that they will not get the same message if they attend a Mosque managed by the Salafists, ultra-conservatives within Sunni Islam who are subsidized by extremists from Saudi Arabia, as they would if it were a more moderate Moroccan imam. In the second case, the imam probably speaks only Arabic, a language that educated young French people don’t understand.

Therefore, it is unsurprising that many young people get connected instead to websites sponsored by ISIS, managed by French speakers and using violent videos with stunning efficiency. Most are simply satisfied to watch these programs and communicate with other believers. A small minority go further and, convinced by a comprehensive propaganda, fly to Turkey and cross the border to Syria. Such was the case with the militants who killed 130 women and men on Nov. 13.

On Nov. 21, Les Gracques, a left of center think tank, organized a debate in Paris on these topics. A young Muslim academic, Hakim el Karoui, insisted that the Muslim community had to organize itself, study more thoroughly its doctrine and stop being dependent on foreign powers or Saudi benefactors who permanently mix up politics and religion. The other participants agreed on the necessity to greatly improve the education level of the imams who should be able to speak French and should be taught in French institutions instead of being directly imported from North Africa.

There was also general agreement that the political establishment could not apply as before the strict rules of separation between religion and state. France’s "laic laws" were adopted at the beginning of the 20th century in response to largely Catholic questioning of the legitimacy of the Third Republic. Those laws, and the culture of "laicite" they helped to create, guarantee a decidedly secular public square. But, secularism has only partial answers to the alienation observant, non-radical Muslims experience, still less to the challenges Muslims face as a religious community in a modern, pluralistic society. It is obvious that the full integration of the huge Muslim minority implies the financing by the government of their religious institution so that they could be at the same level as their Catholic or Jewish compatriots, who have built up their organizations and presence in the culture through several centuries.

Still there remains the main question that religious experts keep asking: Why are so many young people, not all from Muslim families, unsatisfied with Western societies and eager to find a new ideal with fanatics who can be murderers? The explanation is not economic or social. Many militants come from well-off families and were not all that different from the young women and men who died at the Bataclan.

In a televised debate, sociologist Michel Wievorka stated that some of them, at least, were looking for a new meaning in their life, in a world that lacks decisively any spiritual authority. It is certainly a failure of French Muslims that they have never been able to support a charismatic preacher able to propose a version of their religion that fits with the democratic values of the Western world. For the moment at least, there is no Muslim Martin Luther King, Jr. in France.

The same questions arises inside the Catholic church. Some travelers to Syria, about 20 percent according to the security agencies, benefited from a Catholic education and yet moved to Muslim fundamentalism, which they discovered online. It is likely that many more are fascinated without making the fateful decision to go further. It seems somehow that the fates of the two main religions in France are closely connected. They have to make a great effort to listen to younger generations, help them face a hard life in an unforgiving society that values money more than anything else, and provide them with the ideals which are so much lacking today.

Europeans and Americans need to watch carefully the decisions made by the French religious authorities because they must be aware that sooner or later they will face the same dilemmas in their own countries.

[Antoine de Tarlé is a French journalist and a regular contributor to the Jesuit monthly Etudes.]

Christians (and others) under threat

Is terrorism a criminal act or an act of war -- and what difference does it make?