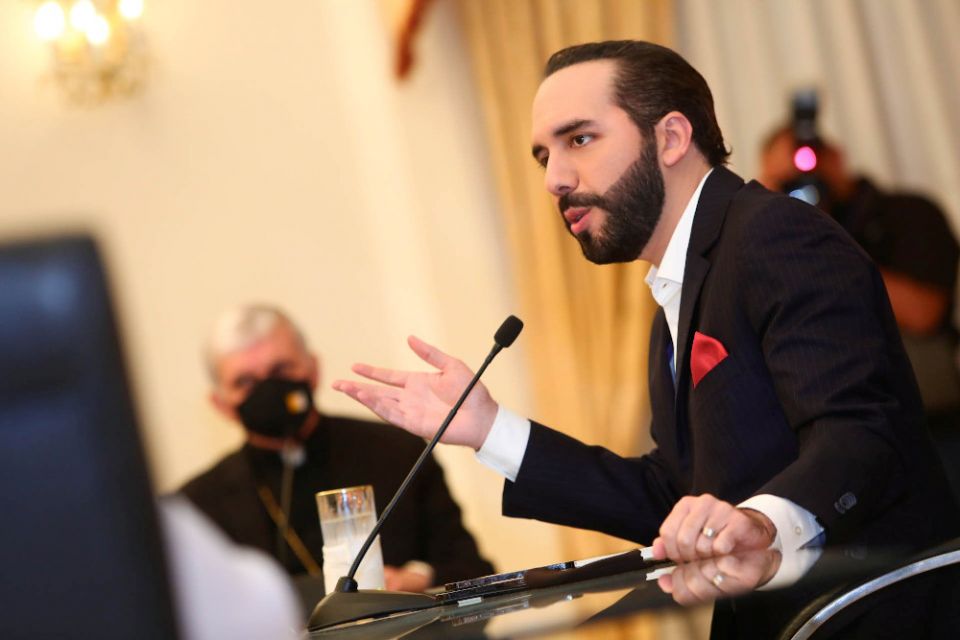 A prelate wearing a protective mask looks on as Salvadoran President Nayib Bukele takes part in a meeting at the Presidential House in San Salvador May 3, 2021. (CNS photo/Secretaria de Prensa de La Presidencia handout via Reuters)

Washington — After international outcry following moves that consolidated power over El Salvador into the hands of the president, the Central American country's Catholic bishops expressed worry and urged lawmakers to guide citizens into a "truly democratic state."

Even if there had been reasons to dismiss five top judges and the nation's attorney general, "we disapprove of the manner in which the dismissals were carried out," said a May 5 statement from the bishops. All six officials were fired and replaced May 1 during the first session of a new general assembly stacked with supporters of President Nayib Bukele.

The new officials were sent to their offices that evening — a Saturday — escorted by police as the dismissed judges called the actions carried out by the new lawmakers "unconstitutional" and a "blow to the separation of powers that will have grave consequences for our country."

The bishops appealed to the lawmakers who put the crisis into action just hours after taking over their new posts. They urged them to "work with enthusiasm and generosity for a new El Salvador, free of violence, impunity and corruption, but under strict compliance with the law."

"We, the bishops of El Salvador, believe that our beloved country demands a change of course, not along paths of violence — well known to the population — but along paths of dialogue, understanding, solidarity, fraternity, equality, freedom, order, justice and peace," they said.

The judges had been at odds with Bukele and stopped some of his most strict measures early in the pandemic. The attorney general is said to have been investigating corruption of two administration officials. Some saw the dismissals not just as payback but a way to take over the remaining political control that eluded Bukele.

Feb. 28 midterm elections put the Nuevas Ideas party, founded by the wildly popular Bukele, firmly in power of the national legislative assembly. They used that power to dismiss the president's opponents in the judicial branch, saying that it was only the beginning.

Bukele and his supporters repeatedly attack members of the country's two main political parties that, until Nuevas Ideas came along, ruled El Salvador, calling them thieves and hurling insults. Some of the accusations are not unfounded as the two major parties have had their share of corruption. But the bishops urged Salvadorans not to turn those experiences "into a fountain of resentment," particularly because past political disagreements in the country have turned into war.

"We are convinced that either the citizens and current rulers forgive the faults of the past and correct them or this country will be tied and condemned to a chain of revenge, aggression, resentment and hatred that will prevent coexistence and the full development of current and future generations," they wrote.

The statement came out on the same day Luis Almagro, secretary-general of the Organization of American States, urged Bukele to reconsider the actions taken or El Salvador was bound to head onto a list of troubled nations in the Western Hemisphere.

"The case of El Salvador is a very particular case ... if the president acts incorrectly, (El Salvador) would take a path which Nicaragua, Venezuela, Cuba and Bolivia are in already, with co-opted powers, political persecution. ... We cannot push one more country into that direction," said Almagro.

The United Nations, various U.S. lawmakers and diplomats as well as Vice President Kamala Harris, Canada and various European nations reacted swiftly with criticism. Only China, which has been eyeing El Salvador as a strategic trade foothold on the doorstep of the United States, said the country was a sovereign nation and others should not interfere.

When Bukele called diplomats to a meeting May 4, Brendan O'Brien, chargés d'affaires of the U.S. Embassy in San Salvador, did not attend.

Nicaraguan bishop to leave for Rome as threats against him increase

HIV stigma, while declining, still a stark reality for some in Zambia