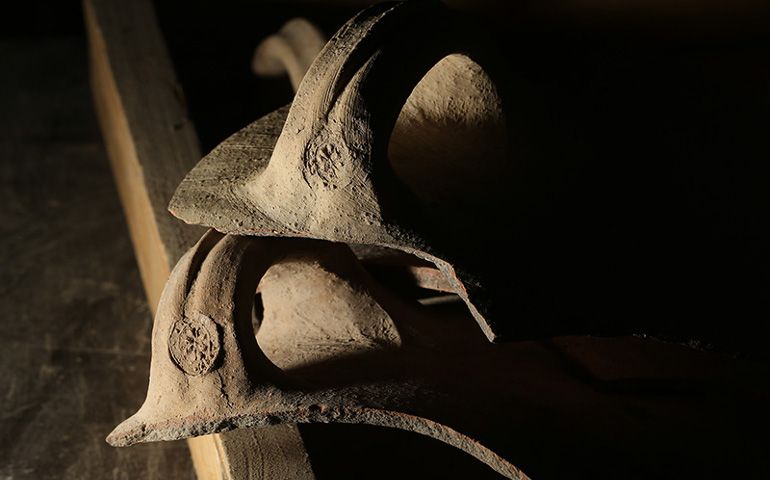 Jug handles with the rosette seal used by the administrative system at the end of the Judean Kingdom. (Photo by Eliyahu Yanai, courtesy of the City of David Archive)

The Israel Antiquities Authority announced the discovery just days before Tisha B’Av, a Jewish fast day commemorating the anniversary of the destruction of both the First Temple by the Babylonians and the Second Temple by the Romans in the year 70.

The fast began at sundown on July 31.

The announcement comes at a time of great turmoil in and around the Temple Mount (the Haram al-Sharif in Arabic), the holiest site in Judaism and the third holiest in Islam after Mecca and Medina.

Among the most important finds were dozens of storage jars, several of them with handles stamped with the image of a petalled rose, or rosette.

"These seals are characteristic of the end of the First Temple Period and were used for the administrative system that developed towards the end of the Judean dynasty,” according to dig directors Joe Uziel and Ortal Chalaf.

At the time, Jerusalem was the capital of the Kingdom of Judea.

The excavation also revealed an artistically rendered small ivory statue of a woman whose hair was cut in an “Egyptian style,” and indicates the wealth of some residents of the ancient city, the authority said.

The excavation also showed that ancient Jerusalem was larger than first thought: It extended beyond the line of the already-excavated city wall before it was destroyed.

“Throughout the Iron Age, Jerusalem underwent constant growth, expressed both in the construction of numerous city walls and the fact that the city later spread beyond them,” Uziel and Chalaf said.

On nuclear power, the warnings are clear