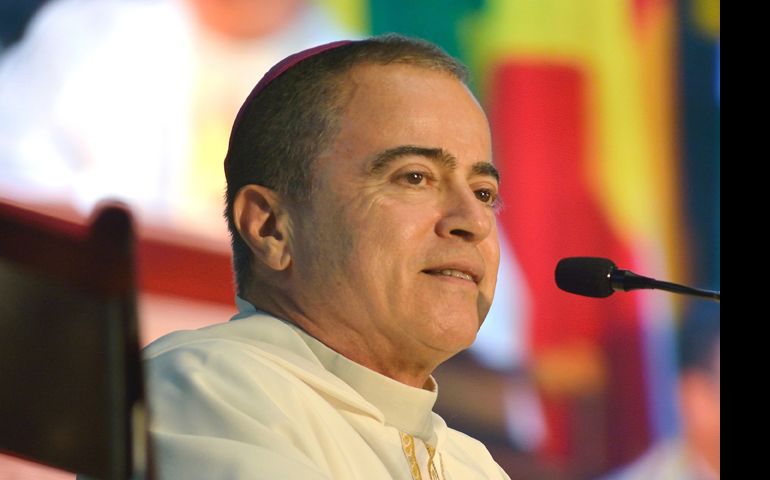 San Juan, Puerto Rico — Reacting to widespread headlines originated by an international news agency, Archbishop Roberto Gonzalez Nieves of San Juan, against the wishes of his legal counsel, spoke to reporters to clarify the church's role in the shutdown of Catholic school teachers' retirement plan.

"It doesn't cease to surprise me that it came from a Catholic entity, which is supposed to help others," AP quoted one interviewee. "The archdiocese created the pension plan in 1979 in part to lure teachers who were joining the island's public school system because of its pension plan," AP noted.

Gonzalez said he felt forced to clarify that information.

"It's very important that you, in the media, are able to read, study, the [retirement] plan's statutes, which is not the archdiocese's," said the archbishop. "Some employers belong to the archdiocese, but not others."

He was referring to archdiocesan agencies and branches, which have one retirement plan, in contrast with diocesan and religious orders schools, which had another.

"I have no authority to make decisions about the [school's] plan because it is a legal entity separate from the archdiocese," said Gonzalez.

The current situation had been growing for the past decade. The retirement plan started with 80 Catholic schools participating; now they number 40.

"Some Catholic schools dropped out of the plan, while others are way behind in their periodic contributions," said the archbishop.

The retirement plan's last statement showed it was supposed to disburse around $370,000 per month, but its monthly income was approximately $75,000, according to archdiocesan sources.

"It's a legal details labyrinth and I do not understand all of it," continued Archbishop Gonzalez, "and that is why my lawyers have advised me not to go into the matter publicly, but it seems to me that those points have not been discussed in the media."

According to a June 2014 report by audit and tax services firm KPGM, titled "Puerto Rico System of Annuities and Pensions for Teachers," "licensed teachers working in private schools or other educational organizations have the option to become members of the [public pension] system so long as the required employer and employee contributions are satisfied."

However, that option is now closed to current Catholic schools' teachers because the two main government employees pension funds -- for regular employees and for Department of Education employees -- are practically bankrupt, with joint liabilities surpassing the $40 billion mark.

The failure of the Catholic teachers' pension fund is one of several lesser crises that make up Puerto Rico's current financial crash.

The latest episode in the U.S. territory's $72 billion economic saga came April 12, when the local Legislature passed a law declaring a state of emergency. Invoking local constitution provisions, the Emergency Moratorium Law for Financial Rehabilitation of Puerto Rico bestows absolute and unilateral powers on the governor.

The law automatically suspended all payments to creditors. The Commonwealth of Puerto Rico has a $422 million payment due May 1 and a larger one July 1.

The local emergency law would be meaningless if Congress passes a proposed bill being considered for the establishment of a federal financial control board to take charge practically of all of Puerto Rico's financial affairs. Amid discrepancies among debating U.S. representatives, the bill got stuck in the House April 14 and voting was suspended.

The prospect of having an imposed financial control board has met wide opposition from the general Puerto Rican population, including Gonzalez.

After Easter Sunday Mass, he said the imposition of such a board is evidence that "Puerto Rico is a territory, a colony."

He has long tied the island's financial crisis to its political status in reference to the U.S. In a column published in the July issue of Time magazine, he wrote: "Puerto Rico's debt comes from a combination of mismanagement, bad luck, and its unique colonial status as neither a sovereign country nor a U.S. state."

The Catholic teacher's pension plan breakdown follows the island's financial crisis. Higher unemployment, taxes and utility costs have meant a decrease in Catholic schools enrollment. In turn, schools have been closed leaving more teachers unemployed -- and the retirement plan underfunded. The population exodus to the U.S. mainland also has been cited as an important factor.

Archbishop Gonzalez said the employers participating in the retirement plan in question found themselves forced to dissolve what was left of it. He added that through Caritas -- a confederation of Catholic relief, development and social service organizations -- the church would try to help about 1,000 retirees impacted by the "painful situation" at hand, plus some 600 others who are in the process of retiring.

"Teachers currently in active duty, together with new hires, will benefit from a "new 401(k)-type plan," said the archbishop.