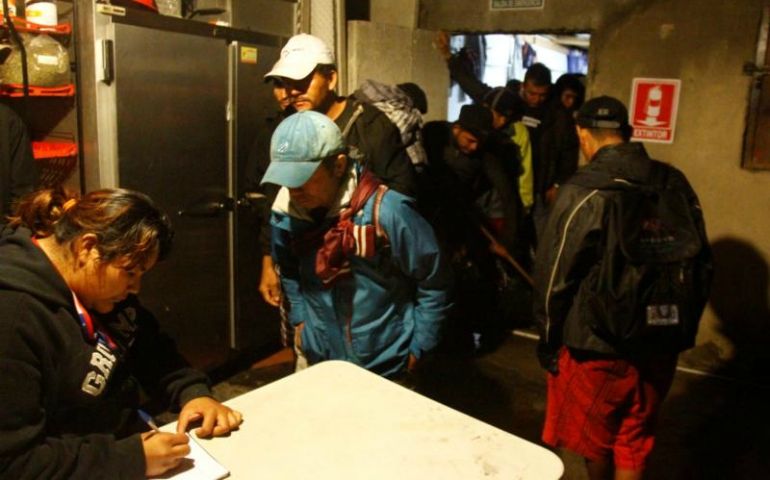 Migrants from Central America, who are fleeing from violence and poverty, arrive May 7 at a shelter in Tijuana, Mexico. (CNS/Jorge Duenes, Reuters)

United Nations — Migration should be "a choice rather than something forced or involuntary," said Philippine Archbishop Bernardito Auza, the Vatican's permanent observer to the United Nations.

For that to happen, he cautioned, the "right to remain" must be respected.

Auza said a proposed U.N. global compact on migration must give the right to remain a higher priority than the right to emigrate.

The archbishop made his remarks May 22 as part of a panel on human-made crises as drivers of migration. The panel was a side event taking place during U.N. preparations for the compact he was addressing.

"There is no worse human-made crisis that drives people forcibly to migrate or internally displaces populations than wars and violent conflicts. More than half of the world's refugees, forced migrants and internally displaced persons have been forced to abandon their homes and properties and, indeed, to flee their countries, because of conflicts and violence, the tremendous negative impact of which continues in the odyssey of the victims," Auza said.

"They face the dangers of trafficking in persons, starvation and many forms of abuse. Upon arriving at their destination, rather than finding a safe haven, in many places they find mistrust, suspicion, discrimination, extreme nationalism, racism and a lack of clear policies regulating their acceptance. Clearly, the most effective way to stop massive movements of forced migrants and refugees is to stop the wars and violent conflicts that cause them."

Auza also outlined other factors he said are "major drivers of migration," such as "extreme poverty, the lack of basic goods and services, and severe environmental degradation and disasters."

"Helping distressed populations where they are, rather than procrastinating and hoping for the best," he said, "is the most effective way to prevent their becoming involuntary migrants. It could also be the most cost effective way to help them and to spare them from all forms of exploitation."

He added, " When vulnerable individuals and populations are forced to move, human rights abuses and sexual-related violence against women and children become all too common; families are separated; many are forcefully detained upon arrival or fall victim to human trafficking and other forms of modern slavery.

While they are in transit and especially when they arrive in their countries of destination, "forced migrants are often perceived as taking advantage of host communities, rather than hapless peoples who deserve assistance and human sympathy," the archbishop said.

The Vatican "continues to insist on the right of all to remain in their countries in peace and economic security," Auza said. "If conditions for a decent life are met and the drivers of migration are adequately addressed, people would not feel forced to leave their homes."

He added, "The migrants who are massively crossing international borders, the forced migrants in search of safety and protection, and the many millions more internally displaced persons look to us for hope and action."

The side conference hosted by the Vatican's U.N. observer mission had as its theme "Ensuring the Right of All to Remain in Dignity, Peace and Security in Their Countries of Origin." It was co-sponsored by the International Catholic Migration Commission, Caritas Internationalis and the Center for Migration Studies.

Among the speakers were Msgr. Robert Vitillo, secretary-general of the International Catholic Migration Commission and former executive director of the U.S. bishops' Catholic Campaign for Human Development; Sr. Norma Pimentel, a member of the Missionaries of Jesus, who is executive director of Catholic Charities of the Rio Grande Valley in the Diocese of Brownsville, Texas; Canadian Jesuit Father Michael Czerny, undersecretary for migrants and refugees at the Vatican's new Dicastery for Promoting Integral Human Development; and a Syrian refugee recently granted asylum in the United States.

World | Archbishop: Migration should be a choice, not 'something forced'