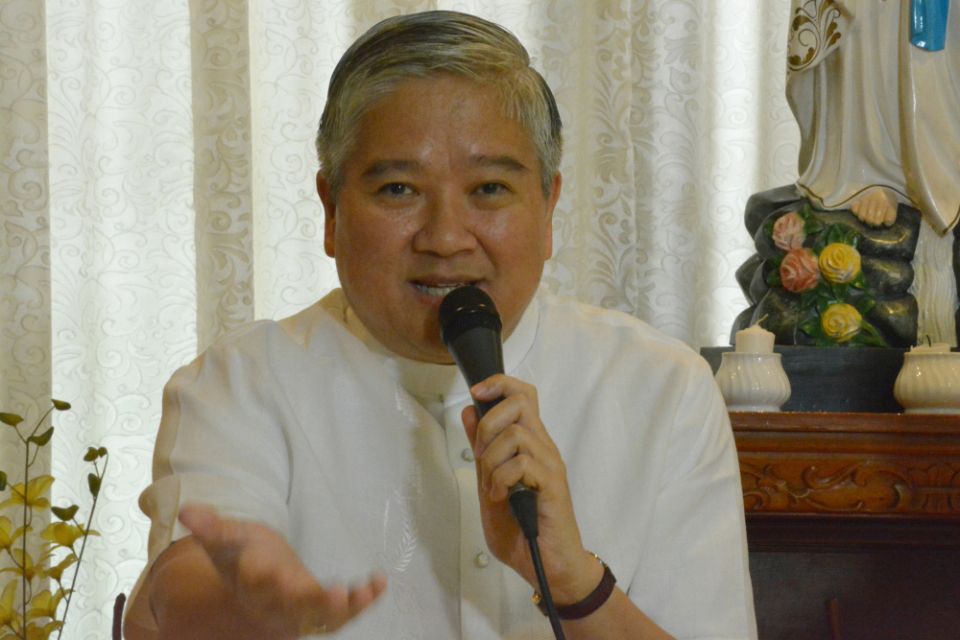 Archbishop Socrates Villegas, pictured in a July 7, 2014, photo, is one of four Philippine bishops charged with sedition. In mid-July, police filed charges of inciting sedition, cyber libel, libel and obstruction of justice against more than 40 people, including the country's vice president and 35 members of the opposition. (CNS/Simone Orendain)

In mid-July, the police's Criminal Investigation and Detection Group filed charges of inciting sedition, cyber libel, libel and obstruction of justice against more than 40 people, including the country's vice president and 35 members of the opposition.

Ucanews.com reported the complaint said they conspired to spread "false information" against the family of Philippine President Rodrigo Duterte and administration officials. It also said they were looking to "agitate the general population into staging mass protests with the possibility of bringing down the president."

"I am very saddened by this news and am greatly disturbed by this development," said Archbishop Romulo Valles of Davao, president of the Catholic Bishops' Conference of the Philippines. "That they are accused of sedition and other criminal complaints is for me beyond belief."

The archbishop said he knows the church leaders and "they are bishops whose sincerity, decency, respectfulness and love for our country and our people are beyond doubt."

"Some of us may feel ill at ease with the way they made known their opinions. But again, I say this: I cannot bring myself to believe that these bishops were involved in seditious activities," he said.

He said he prayed that those involved in the case would be guided by "fairness and truth."

Reyes said the charges were "a desperate move to suppress dissent."

"It's a pathetic attempt to distract people from the serious issue of the shift to totalitarianism," he said, adding that it could be "a wake-up call for the undecided and the indifferent."

Others said the charges were designed to silence Duterte's critics.

"The move is obviously meant to scare the hell out of these churchmen and eventually silence them," said Fr. Jerome Secillano, chairman of the public affairs office of the bishops' conference.

He said what the bishops and priests did was call on the government to be more circumspect and prudent in their actions, ucanews reported.

"They are neither fighting the government nor Duterte. What they are against are the repressive policies that put so much burden on the poor and on those who oppose them," said Fr. Secillano.

"I assure you, they're doing things not for personal gain or selfish interests, but for the sake of those who cannot fight for their rights," he added.

The Couples for Christ Foundation for Life, an influential lay organization, assured the church leaders of their support.

"You do not work alone in this, dear bishops," said a group statement released on July 20. "We encourage them to continue their courageous campaign in journeying with all Filipinos for truth and justice.

"Speaking the truth and fighting for the basic human rights of every Filipino is not sedition," said the group. "It is being faithful to the teachings of Christ and the church."

The charges stem from the release of a video that went viral on several social media platforms early this year that linked Duterte and his family to the illegal drug trade.

A man named Peter Joemel Advincula claimed on the video and at a media briefing that Duterte's son, Paolo Duterte, and presidential aide Bong Go were involved in drug syndicates.

Weeks later, however, he was presented at a news conference by the Philippine National Police; at that time he claimed Vice President Leni Robredo, opposition members and several church people were behind a plot against the president.