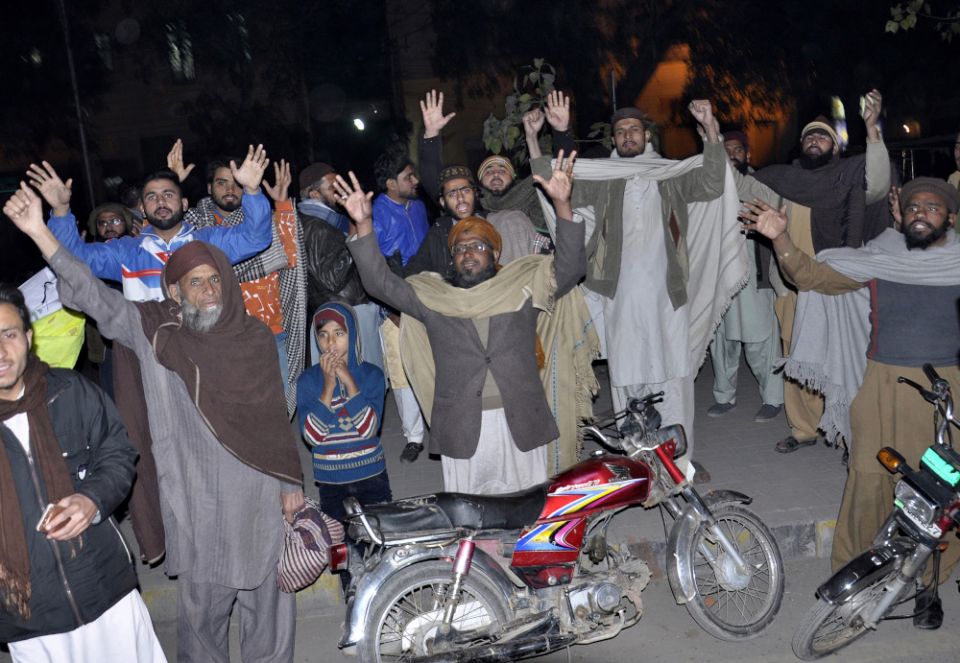 Pakistanis block a road during a protest against the acquittal of Asia Bibi, a Pakistani Christian woman who was facing blasphemy charges, in Lahore, Pakistan, on Jan. 29, 2019. Pakistan's top court on Tuesday upheld its acquittal of Bibi. Radical Islamists protesters were stymied by sweeping arrests and the deployment of a small army of police and paramilitary Rangers outside the Supreme Court in the capital, Islamabad. (AP Photo/K.M. Chaudary)

Lahore, Pakistan — Pakistan’s Supreme Court has dismissed a petition by Islamists to overturn the acquittal of Asia Bibi, a Christian woman previously convicted of blasphemy, freeing her to leave the country and join her daughters in Canada.

In the ruling Tuesday (Jan. 29), Chief Justice Asif Saeed Khosa said the petitioners led by a village cleric failed to point out any mistake in the court’s October 2018 judgment exonerating Bibi.

Instead, the chief justice pointed out discrepancies in testimony by the opposing side.

"There is a clear difference between the testimonies of all the witnesses, and yet you block all of Pakistan and question why you did not get your way," he said during a hearing.

Bibi was first accused of blasphemy against the Prophet Muhammad in June 2009 during an argument with Muslim women over a glass of water. In November 2010, she was convicted and sentenced to death.

On Oct. 31, the Supreme Court set aside the conviction and acquitted her.

While Bibi’s acquittal was a win for minorities in the Muslim-majority country, particularly Christians, the judgment led to countrywide protests by radical Islamic parties led by Khadim Hussain Rizvi, leader of the Tehreek-e-Labbaik group.

The party demanded the court overturn Bibi’s acquittal and sentence her to death by hanging.

Amid death threats to judges, calls of mutiny against the army chief and mob violence, the government agreed to prevent Bibi from leaving the country until a petition to the court to review the case was filed.

Bibi has been in hiding since her acquittal last fall. According to published reports, two of her daughters have left Pakistan for Canada and hope their mother can rejoin them there.

While Labbaik’s top leadership, including Rizvi, continues to be imprisoned after a crackdown against the group by the government, the party’s stand-in leader, Allama Shafiq Ameeni, said in a video statement Tuesday that he rejected the court’s decision to free Bibi.

"Prophet Muhammad, we apologize to you. We are ashamed today, that a blasphemer (Bibi) is alive in a country made in the name of Islam," he said. "The judges, the rulers, have caused great pain to the millions of lovers of the prophet."

Ameeni called on supporters to take to the streets.

"I urge all my fellow Muslim brothers, especially the workers of Labbaik Pakistan, to come out of their homes in protest against this unfair decision," he said.

There were no immediate mass protests by Islamists after the verdict was announced.

Meanwhile, Khosa, in a nod to the mob violence that followed the initial decision acquitting Bibi, challenged the Islamists in court.

"Are we liable to be murdered now that we have executed justice?" he said. "If a judge says a testimony can’t be trusted, that judge’s verdict is not acceptable to you because it is not in your favor?"

Many in Pakistan hailed the dismissal as a win for human rights. 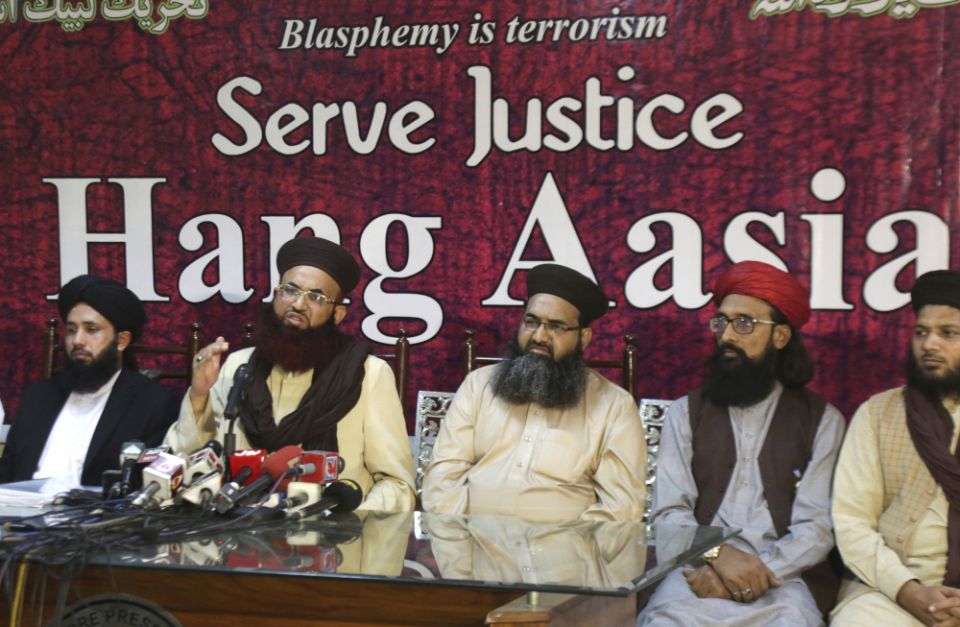 Ashraf Asim Jalali, second from left, a leader of Pakistan’s far-right Islamist political party, Tehreek-e-Labbaik, addresses a news conference regarding the acquittal of Asia Bibi, in Lahore, Pakistan, on Nov. 8, 2018. The Christian woman, acquitted after eight years on death row in Pakistan for blasphemy, was released but her whereabouts in Islamabad are a closely guarded secret in the wake of demands by radical Islamists that she be publicly executed. (AP Photo/K.M. Chaudary)

"For the moderates, the acquittal of Asia means more respect for the judiciary and the human rights in Pakistan," said Fouzia Saeed, a social activist based in Islamabad. "Now Asia needs to be where she feels safe. This is a complex case and there are complexities, as we all know, for her in living in Pakistan."

Within the Christian community, which makes up about 2 percent of Pakistan’s 204 million people, there was a palpable sense of relief.

"Today is a day of rejoicing, come what may in the aftermath of this decision," said Wilson Chowdhry, chairman of the British Pakistani Christian Association. "Bibi has always been innocent, and it is a blight on Pakistan that it took almost 10 years to come to this decision to free her. However, her freedom is a massive step in the advancement of equality and justice in Pakistan."

In Pakistan, blasphemy against Islam is punishable by death, and a mere rumor or allegation is enough to end lives. In 2014, a mob of hundreds burned a Christian couple, Shama and Shahzad Masih, alive over rumors of blasphemy.

Both were brick kiln workers, and Shama, the mother of three, was pregnant.

In 2017, Mashal Khan, a Pashtun university student, was lynched by an angry mob at school over false allegations that he posted blasphemous content online.

According to the National Commission for Justice and Peace, 633 Muslims, 494 Ahmadi Muslims, 187 Christians and 21 Hindus have been charged under the blasphemy rules since 1987, when the country’s military leaders made the punishment for blasphemy punishable by death.

In its recent ranking of the worst places to be Christian in 2019, the nonprofit Open Doors USA ranked Pakistan in fifth place. The organization noted that Pakistani Christians suffer from institutionalized discrimination and that occupations seen as low-class or dirty are officially reserved for Christians.

"Over 40 other blasphemy victims are languishing in Pakistani jails, of which close to 50 percent are Christian," said Chowdhry. "Pakistan’s harsh and draconian blasphemy laws need to be repealed and done away with."

Still, some said the verdict undermines Pakistan’s position as a Muslim country.

"This is a black day for Pakistan," said Munib Butt,  a 19-year-old Lahore-based student who is not part of Labbaik. "What are we telling the world? That even defaming Islam is all right in this Islamic country?"

Is dialogue with Islam possible?

To create religious harmony, we must first build the chords