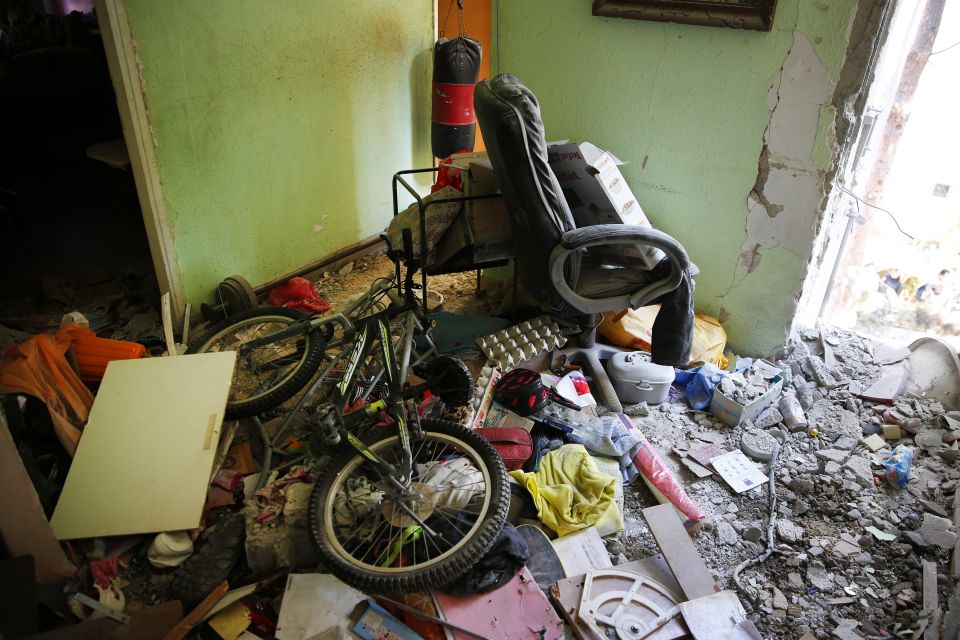 The interior of an apartment building sits destroyed after being hit by a rocket fired by Palestinian militants from Gaza, in the southern Israeli city of Ashkelon, Israel, on Nov. 13, 2018. Gaza militants fired more than 100 rockets at southern Israel early Tuesday, killing a man in a strike on a residential building, and warning they would escalate their attacks if Israel continues bombing targets in the Gaza Strip. (AP/RNS/Ariel Schalit)

Moments later her building shuddered as a Grad rocket landed in a park across the street.

The rocket damaged the other side of Spanglet's building but caused no injuries.

"I thanked God that we weren't hit and, later, that no one was hurt," said Spanglet, a resident of this seaside city eight miles from the Gaza border.

Last week, Spanglet and many others on both sides of the Gaza-Israel border relied heavily on their faith to cope with the most recent violent escalation.

The attacks killed a Palestinian man living in Israel and sent more than 100 Israelis to area hospitals. Then Israel bombed targets in Gaza before both sides agreed to a tentative cease-fire.

Spanglet, an Orthodox psychotrauma therapist who has researched the role that faith and spirituality can play in treating traumatized patients, said having a belief — in whatever form — helps people deal with overwhelming events and reduce feelings of helplessness.

"Studies have shown that faith is an important resource when dealing with trauma. I've found this in Israel, and in Japan when I volunteered there after the tsunami," Spanglet said. "By combining faith and/or spirituality with mindfulness, one's ability to cope is strengthened."

And that, the therapist said, can help build resilience.

In Sderot, a border community where brightly painted above-ground public bomb shelters are as plentiful as park benches, Harel Bashary and some friends checked out the remains of a bakery destroyed by a rocket.

Bashary, who is studying in a post-high-school yeshiva in Sderot prior to starting his mandatory military service, said his belief in God has helped him weather the latest rocket barrage.

"I feel that God is with me and that if, God forbid, something bad happens to me, it's from God," Bashary said. "I'm not afraid of Hamas, even though I know they can kill me."

During the bombardment, spending long hours in the yeshiva's bomb shelter, the students intensified their Torah study, "because we believe in the power of the Torah," Bashary said.

When Atara Orenbach, also a Sderot resident, realized rockets were headed toward the town, she quickly asked God to keep her family safe. Sderot is so close to the Gaza border, residents have just seconds to reach a shelter. Eighty percent of the town's residents have in-home safe rooms.

"Although I pray every day, this time I didn't say any set prayers," the mother of seven said. "I rushed my daughter and her friend into the safe room and simply asked God that nothing should happen to us."

Her biggest concern was her youngest daughter, a fourth-grader, who had just gone upstairs to visit a friend and was forced to take shelter with the neighbor's family.

"Every time I tried to run upstairs there was another alert and another and another," Orenbach said. "We couldn't leave the shelter."

While such attacks are always frightening, Orenbach said, "my faith keeps me strong."

"It reminds me that God promised the land of Israel to the Jewish people and that we live here by right. No one can say Sderot isn't legitimate," she said, noting that the town is located within Israel's internationally recognized borders.

On the other side of the tense border, where Palestinian demonstrators clash every week with Israeli security forces and send incendiary devices and explosives tied to balloons and kites into Israel, Rami Aman, a Palestinian, has placed his faith not in religion but in people.

"I'm a Muslim but I'm not that religious, though I respect religion," Aman said in a phone interview from his home in Gaza City. "Throughout my life there were many times I prayed to Allah. I remember when my family lived in Kuwait. I was 9 or 10 when the Gulf War began, and my mother, my father and I prayed to Allah and read the Quran."

Aman's faith began to evolve when he moved to Gaza with his family in 1992. He continued to attend prayers and lectures at the local mosque but was upset by the political messages imparted by the imams.

"Unlike Kuwait, in Gaza there were politics in the mosque. Fatah and Hamas and Arafat and Israel. I only wanted to learn Islam, not that Israel was an enemy. I still prayed, but within myself," Aman said.

In 2014 Aman received a one-day visa to visit Israel, where he met with an Israeli activist. Together they organized Skype-facilitated meetings between Palestinians and Israelis.

"We started to create a network and we've succeeded in changing a lot of minds," he said. "In the beginning, some of the participants believed in killing Jews or Palestinians, but after a couple of years, they began to believe in themselves and no longer want to be enemies."

The participants reach out to their neighbors across the border, even during the worst of times.

"I'd call that a miracle," Aman said.

Pope Francis calls for 'courage' toward peace between Israel, Palestine

Hope among the ashes for peace in the Middle East?