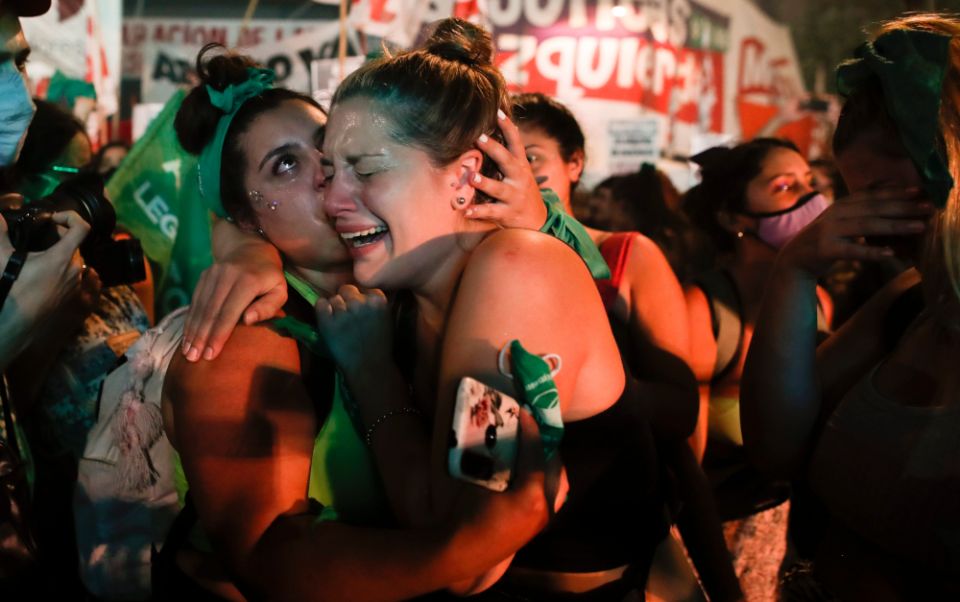 Buenos Aires, Argentina — Argentina's Senate passed a law legalizing elective abortion in Pope Francis' homeland early Dec. 30 after a marathon 12-hour session, a victory for the women's movement that has been fighting for the right for decades.

The vote means that abortion will be legalized up to the 14th week of pregnancy, and also will be legal after that time in cases of rape or danger to the mother's life. It will have repercussions across a continent where the procedure is largely illegal.

The measure, which passed 38-29 with one abstention, was already approved by Argentina's Chamber of Deputies and has the support of President Alberto Fernández, meaning the Senate vote was its final hurdle.

"Safe, legal and free abortion is now the law," Fernández tweeted after the vote, noting that it had been an election pledge.

"Today, we are a better society that expands women's rights and guarantees public health," he added.

Argentina is the largest Latin American country to legalize abortion and the vote was being closely watched. With the exceptions of Uruguay, Cuba, Mexico City, Mexico's Oaxaca state, the Antilles and French Guiana, abortion remains largely illegal across the region.

Outside the Senate, pro- and anti-abortion rights activists gathered, with the bill's supporters wearing the color green that represents their abortion rights movement. Backers waved green flags as Vice President Cristina Fernández de Kirchner, who presided over the debate, announced the result, shouting "legal abortion in the hospital!" as the measure was passed.

Argentina until now has penalized women and those who help them abort. The only exceptions were cases involving rape or a risk to the health of the mother, and activists complain even these exceptions are not respected in some provinces.

Before the vote, the Roman Catholic bishop's conference had denounced what it called a "feverish obsession to install abortion."

Just hours before the Senate session began Dec. 29, the pope weighed in, tweeting: "The Son of God was born an outcast, in order to tell us that every outcast is a child of God. He came into the world as each child comes into the world, weak and vulnerable, so that we can learn to accept our weaknesses with tender love." 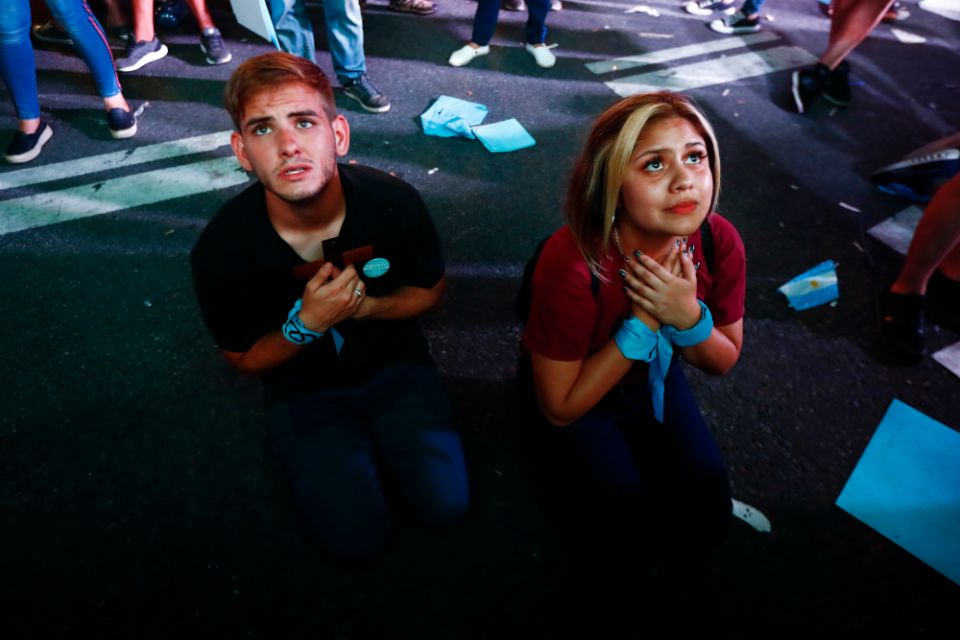 Anti-abortion activists pray during a demonstration against the decriminalization of abortion as lawmakers debate its legalization, outside Congress in Buenos Aires, Argentina, Tuesday, Dec. 29, 2020. (AP/Marcos Brindicci)

Following the vote, the bishops issued a statement saying the measure "will deepen even further the divisions in our country" and said it lamented that the country's leadership was distant from the dominant pro-life sentiment across the nation.

The group Pro-Life Unity said the date would be remembered "as one of the most macabre days in recent history."

A previous abortion bill was voted down by Argentine lawmakers in 2018, but this time it was backed by the center-left government. The outcome, however, had still been considered uncertain. That was partly due to the fact that the political parties, including the governing Peronist movement, gave their legislators freedom to vote as they chose. Two of the 72 senators were absent, and 43 of the remaining 70 senators were men.

Argentina's feminist movement has been demanding legal abortion for more than 30 years and activists say the bill's approval could mark a watershed in Latin America, where the Roman Catholic Church's influence has long dominated.

Amnesty International celebrated the vote as "an inspiration for other countries in the region and the world to advance in recognizing access to legal and safe abortion."

Also outside the legislature, a group that calls its members "defenders of the two lives" set up an altar with a crucifix under a blue tent.

Opponents of the bill, separated by a barrier from its backers, watched glumly as the vote unfolded.

"These politicians aren't representing the majority," said opponent Luciana Prat, an Argentine flag covering her shoulders. "In all the polls, people are against this."

Supporters said the bill seeks to eradicate the clandestine abortions that have caused more than 3,000 deaths in the country since 1983, according to figures from authorities.

In addition to allowing abortion within the first 14 weeks of pregnancy, the legislation allows earlier termination of a pregnancy if it was the result of rape or if the person's life or health is in danger.

It will allow conscientious refusal to participate in an abortion for health professionals and private medical institutions at which all doctors are against the procedure. But they will be required to refer the woman to another medical center. Conscientious objection also could not be claimed if a pregnant woman's life or health was in danger.

After tense year of debates, US bishops to gather for retreat in June