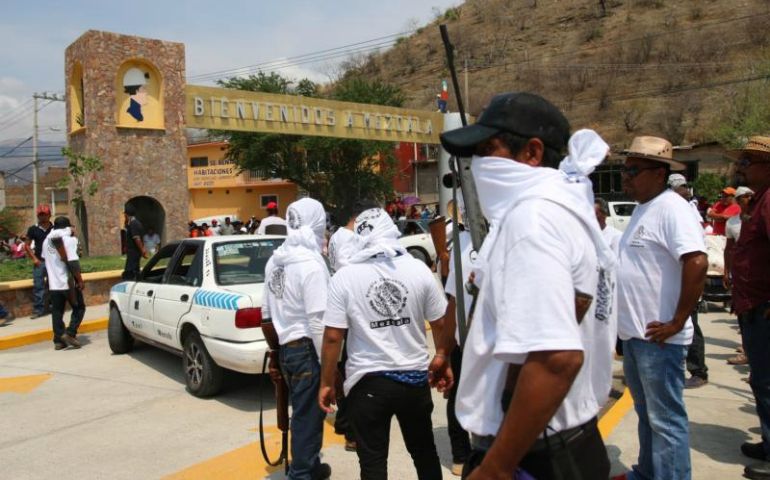 A group of armed civilians is seen May 28 in the southern Mexican state of Guerrero. (CNS/Jose Luis de la Cruz, EPA)

Mexico City — Bishops in the southern Mexican state of Guerrero have suffered threats from organized criminal groups as they serve a region rife with drug cartel activities and parishes located in impoverished indigenous communities where people eke out existences by cultivating opium poppies.

Bishop Maximino Miranda Martinez of Ciudad Altamirano was robbed of his vehicle after encountering a roadblock manned by an armed group in the violent Tierra Caliente region. Bishop Dagoberto Sosa Arriaga of Tlapa, meanwhile, was asked to pay extortion, but escaped making payment as those making the demands were run off by rivals.

Attempts to reach spokesmen in both dioceses were unsuccessful.

Three priests also have received death threats, said Bishop Salvador Rangel Mendoza of Chilpancingo-Chilapa, who provided details on the incidents at a May 27 news conference in Chilpancingo, 175 miles south of Mexico City.

He said bishops and priests had intervened in conflicts among the increasing number of small criminal groups clashing over the cultivation and smuggling of heroin from Guerrero to the United States. Rangel himself has spoken of establishing communications with cartel bosses in an attempt to pacify one of Mexico's most violent states.

"It's not my place to say it, but I asked for assistance from the state and they sent state police, but (those police) were disarmed (by criminals) and the police left," he said of the attempt to quell a cartel conflict.

Violence has worsened in Mexico over the last two years and crime statistics show the country on pace to record its highest homicide rate in 20 years. Guerrero state — site of the 2014 abduction of 43 teacher trainees by police — has been especially violent as dozens of criminal groups contest drug turfs. The murder rate of 61 per 100,000 residents in 2016 was the highest in the country.

At least four priests and two seminarians have been murdered in the state in since 2009.

Rangel has attracted national attention for his work in Chilpancingo-Chilapa, where he has candidly acknowledged seeking a dialogue with drug cartel leaders and has spoken compassionately of the "campesinos" growing opium poppies to make ends meet.

"Opium poppies are produced as harvested and I cannot in any way condemn it because they are campesinos (poor farmers) who have no other way to live," Rangel told the newspaper Reforma in March. His comments attracted criticism for their portrayal of criminal groups and allegations he downplayed the damage caused by drug cartels, whose members often prey upon local populations and commit crimes such as kidnapping and extortion.

"These are not the 'narcos' from northern and central Mexico. I simply call them farmers. They collect opium paste, but all of this has a distribution system (elsewhere)," he said.

The bishop acknowledged that his comments have not been well received by state and local authorities. He said he has had no water service in his home since his comments made national news.

Hector Astudillo, governor of Guerrero, previously asked media to refrain from reporting violence to spare the image of Acapulco and its sagging tourism industry, but Rangel often speaks of the authorities as contemptuously as criminal groups in Guerrero.

"The authorities at various levels of government have created power vacuums," which criminals are filling, the bishop told Reforma.

"These groups tell me: 'We're narcotics traffickers, but not hit men.' Ordinary people in general tell me: 'We like them.' In other words, people feel much more protected with them than with the official authorities," he said.

Pope to Mafiosi: Turn away now from the road to hell

Why is Pope Francis spending so much time going after the Mafia?

Italian priest, unfazed by death threats, goes after the Mafia