Bolivian bishops detail their role in pacifying the country in 2019 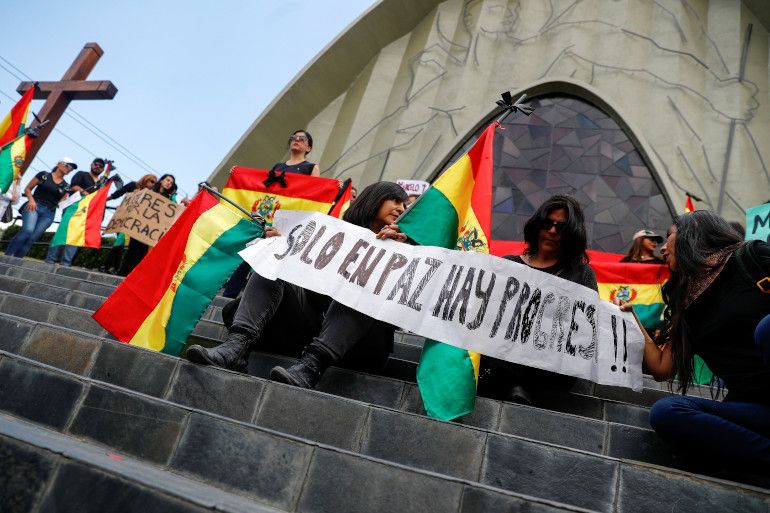 Demonstrators in front of a Catholic church in La Paz, Bolivia, hold a placard that reads "Only in peace is there progress" in this 2019 file photo. (CNS photo/Kai Pfaffenbach, Reuters)

Mexico City — Bolivia's Catholic bishops have released a comprehensive document detailing their role in ending public unrest after a disputed election in late 2019. The document's release comes amid accusations from the country's then-ruling party that the church was somehow complicit in its ouster and the installation of an interim government.

The 25-page document detailed the bishops' actions in pacifying post-election protests that descended into violence. It also reiterated the bishops' role as mediators -- working alongside foreign diplomats and politicians -- who did not make decisions on political matters.

"At no time did this group have a decision-making role. It was always aware that decisions were in the hands of various political actors represented in the (legislative assembly) in adherence with the Bolivian constitution," read the document, released June 15 by the Bolivian bishops' conference.

"The group of invited facilitators invited different actors, among them members of the government of (former President) Evo Morales and assembly members for the MAS" -- Morales' Movement Toward Socialism -- "with the only objective of finding the door to pacifying the country in the face of violence generated by the accusations of fraud and the resulting power vacuum."

The document's release caused a stir in Bolivia, where the ruling Movement Toward Socialism --which won new elections in October 2020 with candidate Luis Arce -- has called Morales' ouster a "coup" and sought to arrest members of the interim government, which ruled for almost one year.

Among those arrested was the former interim President Jeanine Áñez, whose term was controversial as she persecuted hundreds of political opponents and strayed from her mandate to act as a caretaker government.

The Bolivian bishops' conference declined to comment further on the document.

In releasing the document, the bishops said: "We believe the Bolivian people deserve to know the process through which everything possible was done to exit the grave political and social crisis of 2019. Our commitment is to the Bolivian people, peace and the construction of a better country."

The bishops also emphasized, "MAS was a fundamental actor in this process (of dialogue), which concluded with the convening of general elections."

Bolivia erupted in protests after Morales was declared the winner of elections held Oct. 20, 2019, with a margin sufficient to avoid a runoff vote. Accusations of electoral irregularities surfaced almost immediately.

In the document, the bishops say they were invited to get involved in the pacification process by the then-communications minister Manuel Canelas, a member of Morales' Cabinet.

"In spite of the chaos in the streets, the only order of the day (Nov. 11, 2019) that was permitted by representatives of the MAS was the exit of the president, Evo Morales, with security and his life not in danger, to Mexico," the document said. "It was suggested other points be moved ahead, due to the violence in the streets, but it was not permitted."

Morales' colleagues and supporters rebuked the bishops' report and denied many of its claims.

"Some hierarchs of the Catholic Church were silent when the de facto government massacred the people and assaulted the state. Now they justify the coup with political communiques," Morales tweeted. "They're trying to avoid the blame, but all they did is confess they were accomplices."

Morales, Bolivia's first Indigenous president, ruled from 2006 to 2019 and was seeking a fourth presidential term, having ignored a 2016 plebiscite in which voters denied him permission to do so.