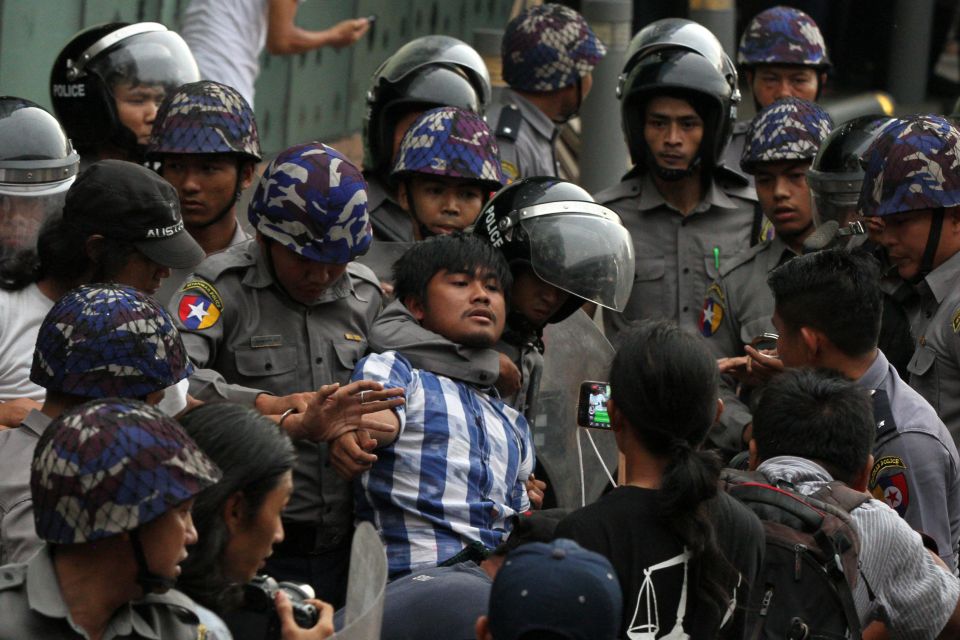 Police officers detain a student taking part in a rally demanding peace May 12 at the war-torn section of Yangon, Myanmar. (CNS/Reuters)

In an open letter to Myanmar's people, Bo and 17 other members of a high-level delegation from Religions for Peace International and Myanmar stated their commitment to peace and reconciliation efforts in a country currently experiencing internal conflicts, ucanews.com reported.

"It is at a crucial moment in the history of this country that we, as Buddhist, Christian, Hindu and Muslim leaders from Myanmar and across the region, come to you in solidarity with hope for peace," began the letter presented May 25 to Suu Kyi.

The faith leaders rejected the misuse of religion and race to divide the country, saying that doing so violates the fundamental tenets of the world's religious traditions and brings hatred, discrimination and violence.

"In our collective efforts to resolve inter-communal conflicts and to advance national reconciliation ... we wish to bring your prayers for peace to the Panglong 21st Century Peace Conference," said the letter in relation to local peace initiatives aimed at ending the country's internal conflicts.

The letter went on to say the delegation hoped to help foster the country's peace and reconciliation process through a series of meetings, suggestions and displays of religious tolerance.

"We are committed to working with the Union government and other relevant actors to achieve a nationwide cease-fire agreement and sustainable peace with the vision of a democratic federal system in Myanmar," the letter said.

"We are painfully witnessing increasing hostilities and the large displacement of people in Kachin and Shan states, which further weakens the peace and reconciliation process," said the letter, referring to an increase in fighting between Myanmar's military and Kachin rebels that has resulted in the displacement of thousands of civilians.

"We are committed to working with the Union government and other relevant actors to achieve a nationwide ceasefire agreement and sustainable peace with the vision of a democratic federal system in Myanmar."

The letter also highlighted the crisis in Rakhine state and efforts being undertaken to resolve the crisis, which the United Nations has called ethnic cleansing. More than 670,000 Rohingya have fled Rakhine for Bangladesh since September to avoid an anti-insurgency campaign being waged by Myanmar's military.

"Good and laudable efforts are being advanced, including the agreement between Bangladesh and Myanmar on the return of refugees and the invitation to the United Nations to facilitate this process, urging priority to peace, development, education and human rights for all communities in Rakhine state," the correspondence said.

The letter also called for "the exploration of global sharing schemes" as ethnic groups battle for Myanmar's limited resources, and suggested an international conference including the U.N. to keep dialogue going.

Suu Kyi welcomed the suggestions for multi-religious cooperation from the faith delegation.

She said religious leaders can pave the way for "progress for all" by encouraging their communities to work together and promoting a more inclusive ideology that incorporates those who are "left behind."