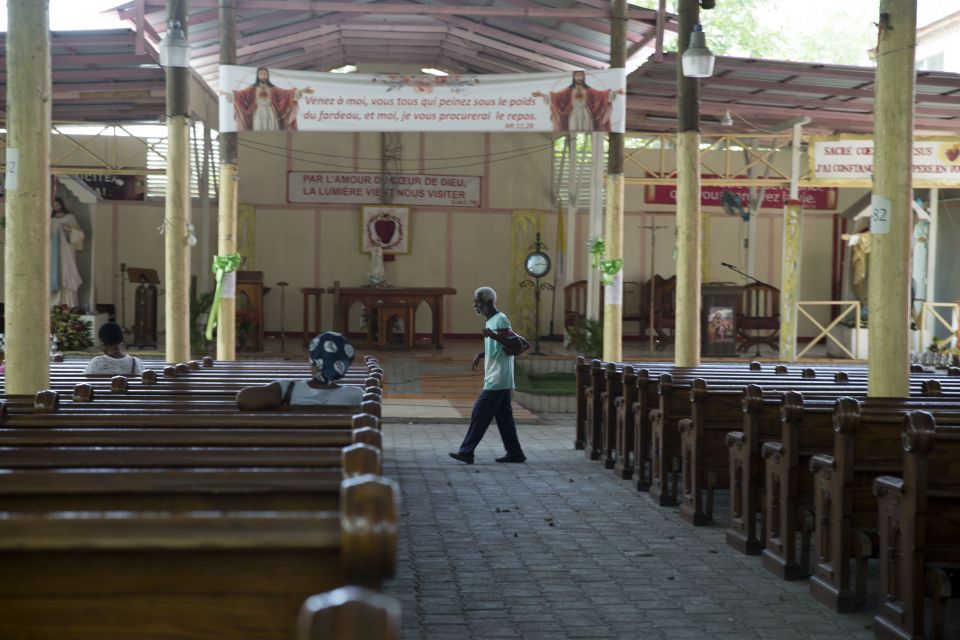 An elderly man walks inside the Sacre Coeur of Turgeau Catholic church in Port-au-Prince, Haiti, Wednesday, April 21, 2021. Catholic institutions including schools and universities closed April 21 across Haiti as part of a three-day protest to demand the release of nine people including five priests and two nuns kidnapped more than a week earlier amid a spike in violence the government is struggling to control. (AP/Joseph Odelyn)

Port-au-Prince, Haiti — Roman Catholic institutions including schools and universities closed April 21 across Haiti in a three-day protest to demand the release of five priests, two nuns and two other people kidnapped more than a week earlier amid a spike in violence that the government is struggling to control.

Catholic officials also organized Masses to pray for those kidnapped — at least two of whom are French — as they tolled the bells at noon at St. Pierre church in Pétionville, where hundreds gathered to show their support.

"No one is safe," said 65-year-old Margaret Jean Louis. "I'm hoping the people kidnapped will make it out safely."

The April 11 kidnapping of the priests, nuns and three relatives of one of the priests in the capital of Port-au-Prince is one of the most shocking recent abductions in Haiti, which saw a 200% increase in kidnappings last year, according to the United Nations.

One of the relatives was released because she was sick, according to a radio interview broadcast on Monday of a man who claimed to be the leader of the kidnap gang.

The man, who identified himself as Lanmò San Jou of the 400 Mawozo gang, told Radio Mega that the French nationals are among the most important hostages: "If Haiti is like this, it's because of the French."

The alleged gang leader said he wants restitution from France and that he would stop feeding the people he kidnapped. He declined to say how much ransom he was seeking.

Church officials who organized the shutdown said Masses would be held on April 21 and April 22 and that on April 23, church bells across Haiti would toll for the victims.

"We, the Catholic bishops of Haiti, see with great sorrow that there has been no change in the situation of our brothers and sisters in the hands of the bandits," the Conference of Catholic Bishops said in a Tuesday statement. "Ten days in the hands of kidnappers is too much."

One of the kidnapped priests had been working as a missionary in Haiti since 1985 and was assaulted and shot a couple of years ago, the Rev. Paul Dossous, superior general of the Society of Priests of Saint-Jacques, told Paris-based Franceinfo in an interview published last week.

He said church authorities try to stay in touch with the kidnappers as much as possible, and that while he worries about those kidnapped because some of them are sick, he doesn't foresee canceling any missions: "We are not men to run away from a situation, no, even if we are afraid anyway because we're human."