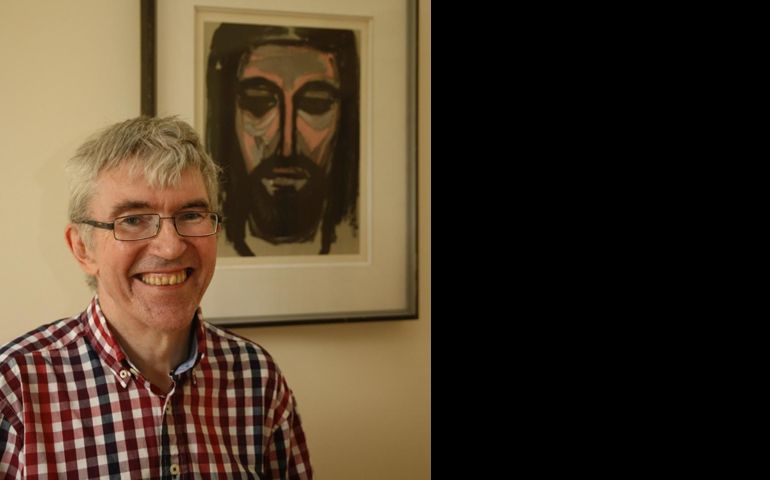 Fr. Gerry Moloney (Colm Holmes of We Are Church Ireland)

The Congregation for the Doctrine of Faith's current strategy of censuring priests and religious it believes are out of step with church teaching has been roundly criticized as "ridiculous and self-defeating" by an Irish priest who fell afoul of the Vatican in 2011.

Speaking for the first time publicly about his experience, Redemptorist Fr. Gerry Moloney warned that "imposing sanctions on people does not make them change their views."

He was one of 15 signatories to the recent letter to Pope Francis and the CDF calling for reform of the Vatican's investigation processes and for greater accountability and transparency in its methods which were deemed "medieval," lacking in basic politeness and designed to wear those being investigated down.

The 54-year-old former editor of Reality magazine told NCR there is "something is rotten in the state of the CDF, and while the current people and processes remain in place, nothing will change. Priests, sisters and brothers will continue to be treated as less than human, and will have their lives hurt or broken."

Addressing the general assembly of We Are Church Ireland recently in Dublin, he warned that the CDF process of investigation and censure "only damages the standing of the church and has a chilling effect on healthy debate and discussion."

"I haven't changed my mind on any of the issues flagged by the CDF. And nor will I," he stated, highlighting the need for "justice inside the church if we are to preach about justice in the world outside."

Recalling the day that the news of the CDF's displeasure was broken to him by his provincial superior in late May 2011, he said it came as a "bolt from out of the blue."

Redemptorist Fr. Michael Kelleher, the Irish provincial at the time, relayed to him that a discussion had been ongoing for some time about his role as editor of Reality magazine, a small publication selling less than 10,000 copies per issue.

"He said that people in the Congregation for the Doctrine of the Faith were not happy with some of the content of the magazine, and that the Redemptorist superior general in Rome, Fr. Michael Brehl, had received a letter instructing him to inform the superior in Ireland that I was to be removed from my position as editor with a month's notice," Moloney said. "I was dumbfounded. It sounded like a joke."

The provincial explained that both he and Brehl had lobbied hard on Moloney's behalf and that they had been able to hammer out a compromise with the CDF. Moloney could remain as editor subject to five conditions.

The conditions stipulated that he could not publish anything that was supportive of the ordination of women; critical of mandatory celibacy; in favor of general absolution; opposed to the church's stance on homosexuality; and could be seen as disrespectful of the person of the Holy Father.

In addition, a censor would have to approve the content of every issue prior to publication.

When the Redemptorist superior general visited Moloney sometime afterwards, Moloney said Brehl recounted how a file had appeared on his desk ahead of Easter from the CDF with a list of allegations and findings against Reality magazine and a demand that the editor be removed.

According to Moloney, Brehl "expressed amazement time and again at the shoddy case that the CDF had put together. He said that it looked like it had been scrambled together by a bunch of amateurs. Sentences and paragraphs had been taken out of context, there had been a lot of reading between the lines."

Brehl said he had met several times with Cardinal William Levada, former prefect of the CDF, and that the best compromise they could reach was to leave Moloney in office but under the restrictions outlined above.

The issue of Reality that had upset the CDF most was a special issue, published in March 2009, on women in the church. The CDF interpreted the issue as promoting women's ordination.

"In fact, I thought that special issue was very balanced. We had nowhere explicitly called for women's ordination, though several pieces did call for women to be given full and equal partnership in the church," Moloney explained.

Those first few days after hearing about his situation left Moloney feeling "numb."

"I began to feel angry and betrayed. I was angry, not so much that self-appointed defenders of the faith had reported me to the Vatican, but that faceless bureaucrats had taken these delators so seriously," he added. "I was angry that they would begin a process against me without ever letting me know I was being investigated. I have never to this day seen any of the documentation in relation to my case."

For Moloney, the whole process shows just how flawed the CDF methods are and the need for reform of the investigation process, specifically its reliance on anonymous denunciations.

"You are tried, found guilty and sentenced, before you even know you were on trial. And yet the gospel tells us that people will 'know we are Christians by our love.' "

He soon understood that all communication about his situation would only take place through his superiors.

"As we know now, the CDF never communicates directly with the person under investigation," Moloney said. "They never dignify the 'culprit' with a direct and personal response. I don't think it's how Jesus would have done it."

"I felt angry and hurt that this is how the church would treat me after I had devoted my whole life to it. The powers that be in Rome would accept the word of anonymous delators against my solid record of a quarter century of loving service of the church."

"My feeling was, I had given my life to the church, and this is how I had been repaid," he said. "Any criticism I had made of the church was out of love, and they didn't even have the decency either to ignore the delations or give me a chance to reply to them before they handed down sentence. They didn't give me the chance to defend myself, privately or publicly."

Moloney became editor of Reality, a popular pastoral publication for people in the pew, in 1993. At the time, the magazine was "a dull, stodgy, safe magazine, that had been limping along with declining circulation," he said. "When I took over, at age 32, I wanted the magazine to be livelier and more current. I wanted it to try to reflect what its name suggested: reality. Reality in the church and the world."

He steered the magazine towards a fresher look and a bit more bite.

"Over the years, I found myself becoming more and more critical of trends in the church, and how Rome was trying to turn the clock back on Vatican II," Moloney said. "I became more and more aware of the cancer of clericalism, and of the maleness of the church, as well as the lack of any involvement by laypeople in decision-making in the church. The focus on externals -- dressing up and liturgical language and lace -- really got to me."

Moloney stepped down as editor of Reality in 2014 due to medical issues.

"It's been more than two years since I woke up with chronic lower back pain that has never gone away," he said. "I wonder how much of it is due to the way I was treated by the CDF? I think the stress that that experience caused me is one of the main reasons why today I am broken in body as well as in spirit. Stress takes a toll, injustice has a price, and I am paying it every day."