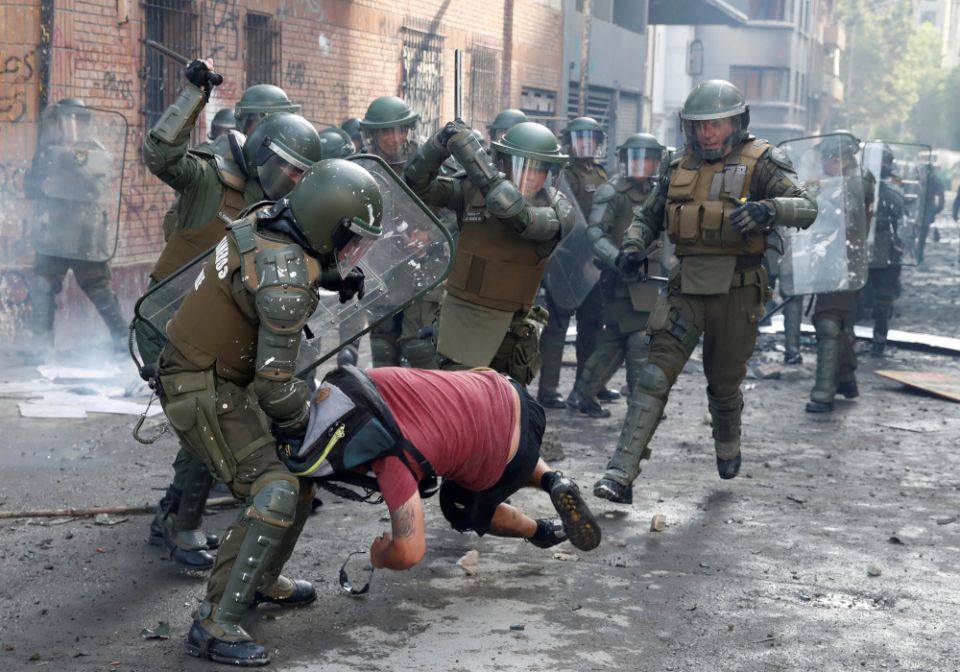 Police in Santiago, Chile, clash with a demonstrator Nov. 14, 2019, during a protest against Chile's government. Chile's bishops Nov. 9 called for national dialogue and an end to the violence that has wracked the country for a month. (CNS/Reuters/Goran Tomasevic)

Lima, Peru — Chile's bishops called for national dialogue and an end to the violence that has wracked the country for the past month.

Their pleas to end the violent protests came in two messages after demonstrators sacked the Assumption of Mary Parish in Santiago, the Chilean capital, Nov. 8, burning pews and statues. Other parishes also were attacked, including one in the southern city of Valparaiso.

"We are pained by the mistreatment of people, the constant looting and the violence, whatever its source," the bishops wrote in a statement Nov. 9. "We are hurt by the attack on churches and places of prayer with no respect for God for those who believe in him. Churches and other places of worship are sacred."

The bishops said they "radically oppose injustice and violence" and called for those responsible to be identified and punished through the judicial system.

Violent protesters "only impede us from paying due attention to the just demands of the majority of Chilean people, who long for real and peaceful solutions," they wrote.

The protests began in mid-October, when students in Santiago defied a transit fare hike by jumping turnstiles in subway stations. The government rescinded the fare increase, but the demonstrations spread throughout the country and grew to include other grievances, including dissatisfaction with the country's health care, education and pension systems.

Chile is one of Latin America's wealthiest countries, but also harbors some of the greatest disparity between the income of the richest and poorest citizens in the region.

"The big issue is profound social inequality," Alejandra Vives, associate professor of public health at the Pontifical Catholic University of Chile in Santiago, told Catholic News Service. "The people in the streets are asking for dignity."

At least 20 people have died and several thousand have been injured, according to news reports. Chile's National Human Rights Institute has also registered cases of torture and sexual violence by security forces.

For older Chileans, the show of force conjures memories of the heavy-handed tactics of the military under the dictatorship of Augusto Pinochet in the 1970s and 1980s, Vives said.

Chilean President Sebastian Pinera responded to the protests by making changes within his cabinet and announcing a series of measures including a guaranteed minimum wage of about $460 a month, an increase in pensions, higher taxes for the wealthiest Chileans and more equitable distribution of funding for public services between wealthy and less-wealthy municipalities.

But those measures and a proposal for reform of the country's constitution, which dates to the dictatorship, have failed to quell the protests.

The bishops called for the government to control the violence by enforcing the law democratically.

"People are not only tired of injustice, but also of the violence, and the vast majority anxiously await respectful dialogue that rebuilds the fabric of society," the bishops said in their statement.

They reinforced their message Nov. 12 with another statement, issued during their annual assembly.

"We humbly appeal to the generosity of all to put the common good of the country ahead of all personal or group ambition," the bishops wrote.

They called for an end to "all types of violence, wherever it comes from," but insisted on maintaining democratic principles. The country's history shows the harm that "a breakdown in (democracy) and the systematic transgression of people's dignity has done to many of our fellow citizens and to Chile's soul," they said.

The bishops also called for a "broad, participatory and diverse national dialogue without exclusions," which would include not just politicians, but "all men and women of goodwill," as well as grassroots organizations and labor unions.

"Chile cannot wait!" the bishops wrote. "We must all make our best efforts to tear down the walls that separate us and build bridges" to reach agreements "that lead us to a future with more justice, with peace and dignity, where no one feels excluded from integral human development."

Pope to meet with second group of abuse survivors from Chile