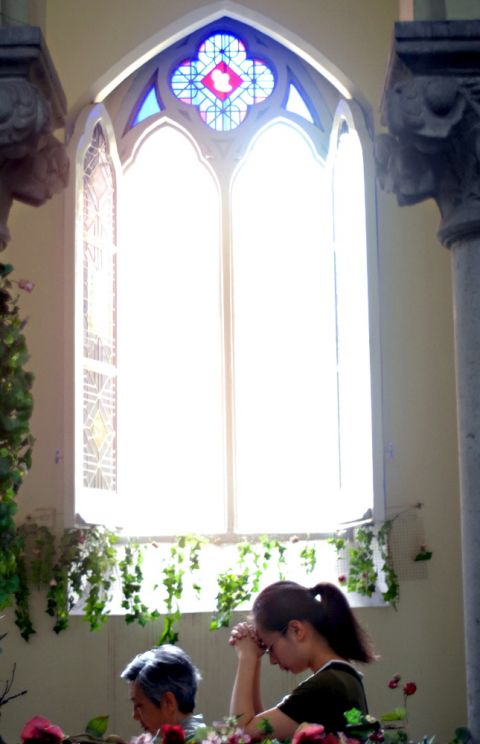 Women are seen praying in an undated photo during Mass at a Catholic church in Shanghai. Church officials fear that newly revised religious affairs regulations released by the Chinese government will be used to further suppress religious activities. (CNS/Wenhao Yu, EPA)

Earlier in September, Premier Li Keqiang announced that a state council order on the new regulations would take effect Feb. 1.

Anthony Lam, executive secretary of the Holy Spirit Study Center in Hong Kong, told ucanews.com that the  new provisions showed authorities had not listened to opinions expressed by religious communities during public consultations.

Total religious control was the goal, he said, whereas a 2005 version had been more balanced and moderate.

Lam cited tighter restrictions in the revised regulations on "unauthorized religious" venues. He questioned whether a home display about Zen meditation exercises could, for example, be deemed illegal.

He stressed that both open and underground communities of the Catholic Church in China would be affected.

Because of loopholes in the regulations, the open communities — whose leaders register with the government — could be subjected to cash extortion demands over what authorities considered to be "unauthorized" religious venues, he added.

A draft of the regulations was released in 2014, but a finalized version was only recently made public. The regulations include chapters on general provisions as well as religious groups, venues, personnel, property and legal responsibilities. Detailed provisions on what constitutes religious institutes and religious activities are also covered, ucanews.com reported.

Ying Fuk-Tsang, director of the Divinity School of Chung Chi College in the Chinese University of Hong Kong, told ucanews.com that an emphasis on "the rule of law" was aimed at strengthening control over religious affairs. Although the Chinese government said the emphasis was designed to protect religious freedoms of citizens, Ying said that was impossible.

The underlying theme was that religious entities not only had to comply with the constitution, laws, regulations and other provisions, but also practice "core values of socialism."

Ying said on some matters it remained unclear just what was required of religious groups, institutes and believers. He said he feared the stricter rules seek to undermine the essence of faith.

Fr. Joseph, an underground priest of Wenzhou Diocese, in Zhejiang province, told ucanews.com he was concerned about organizing large religious activities as there would be very specific penalties if they were deemed unauthorized.

The new regulations stipulate that if a religious group holds an activity without permission, authorities could impose a minimum fine of more than $15,000. Revenue from gatherings and property could also be confiscated. In addition, religious authorities could demand that church officials, or those in control of venues, be removed from their positions.

Fr. John, in northwestern China, told ucanews.com that the new and old regulations were not essentially different, but that a controlling "rope" had been tightened.

He added that the tougher approach was "not good news" for the underground church, which refuses to join the Catholic Patriotic Association.

Fr. John noted that the Article 5 of the regulations stated that all religions must adhere to the principles of national independence and self-governance, with religious groups, schools and venues not to be "controlled" by foreign forces.

"This article is still an insurmountable obstacle for the unity of the China Church," he said.

"I don't know whether the Vatican can see this clearly."