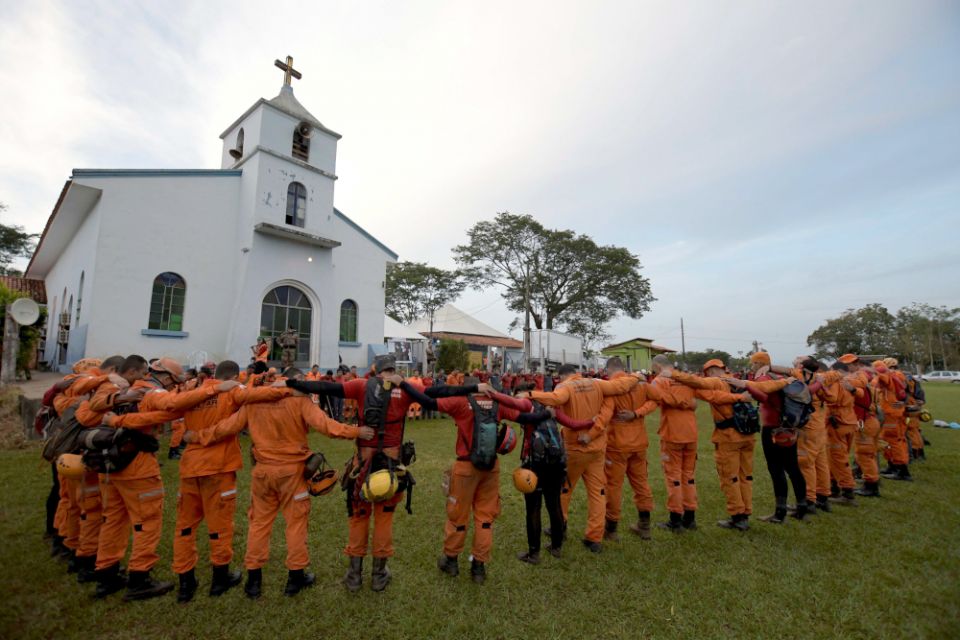 Members of a rescue team pray before working in a collapsed tailings dam owned by mining company in Brumadinho, Brazil, Feb. 13, 2019. (CNS/Reuters/Washington Alves)

Lima, Peru — Throughout Latin America, people whose lives and land have been affected by industries that extract natural resources, such as mining or oil operations, find strength in their spirituality, church leaders say.

"In many communities, there is a profound bond between the people, as community, and the presence of God expressed in the land, the trees, the rivers," said Moema Miranda, a lay Franciscan who heads the Churches and Mining Network in Latin America.

That understanding has become stronger since Pope Francis issued the encyclical "Laudato Si', on Care for Our Common Home" in 2015.

"Pope Francis says that everything is interrelated, and that human beings have an intrinsic value" that is often overlooked in cases where mining companies come into conflict with local communities, Miranda said.

The most recent example was the collapse of a dam that sent a flood of toxic water and mud cascading through a valley in Brumadinho, in the Brazilian state of Minas Gerais, Jan. 25.

The disaster at the Vale mining company's Feijao Mine left more than 150 people confirmed dead and at least as many missing in what Brazilian Bishop Walmor Oliveira de Azevedo of Belo Horizonte called "a criminal tragedy."

"The bodies of the human and nonhuman victims remain buried and probably will never be found," Miranda said at a Feb. 20 panel discussion, part of a workshop on extractive industries and spirituality organized by the Churches and Mining Network.

"This is not an isolated case," she added, noting that the collapse of a similar dam at another mine owned by Vale, BHP Billiton and Samarco flooded the town of Bento Rodrigues in November 2015, killing 19 people and sending a cascade of polluted mud down the Doce River.

Viewing those disasters and others in light of Francis' call to safeguard "our common home" leads people of faith to ask "what kind of house do we want to build in Latin America?" said Italian Scripture scholar Sandro Gallazzi, who works with the Brazilian church's Pastoral Land Commission in the northern city of Macapa.

Noting that the prefix "eco" comes from a Greek word meaning "house," Gallazzi said economic decisions reflect "how the (home) should function."

"The economy clearly favors the interests of a small minority of people at the cost of the suffering and exploitation of thousands upon thousands of people," he said, echoing the pope's words.

The economic boom that began in Latin America in the early 2000s spurred an expansion of mining and oil and gas concessions in the region, with governments saying the export of raw materials like minerals yielded revenues necessary for reducing poverty in their countries.

"But in many communities, people say, 'I want my land, not to get money from it, but so I can continue to have clean water, or (they say) I am rich, I have a good life because I have forest. I'm not interested in (the company's) money,'" Miranda said.

That has led to conflicts between mining companies and communities throughout the region.

Latin America's mining regions tend to be places where people are affected by other violations of their rights, Miranda said. The areas are often home to small farmers and lack good transportation, education and health services.

The Churches and Mining Network, which began work in 2014, grew out of an awareness that "resistance in defense of life in general is grounded in spirituality," she said.

The ecumenical network now includes about 70 religious communities and church groups in 15 countries.

The members engage in dialogue with bishops about issues related to mining and extractive industries, Miranda said. The network also provides training to people who live in communities affected by mining, to help them understand and defend their rights.

That activity is increasingly dangerous for grassroots leaders who protest the construction of mines, dams and other large-scale infrastructure projects, or the clearing of forests for industrial ranching and farming.

Global Witness, a London-based nonprofit organization that tracks violence against environmentalists, recorded 201 murders in 2017, of which 57 occurred in Brazil. That is also the country where Sister Dorothy Stang, a member of the Sisters of Notre Dame de Namur, was killed in 2005 for defending the rights of small farmers against ranchers in a remote area of the Amazon.

Despite the political and economic power behind projects that threaten their lands, people say "we won't leave this place," Miranda said. What gives them strength, however, is "not just a rational principle – it is a profound connection to the place where you are, to which you belong, and a response to a cry that comes from the earth, but which is heard by God."

USDA puts brakes on land transfer for Arizona copper mine