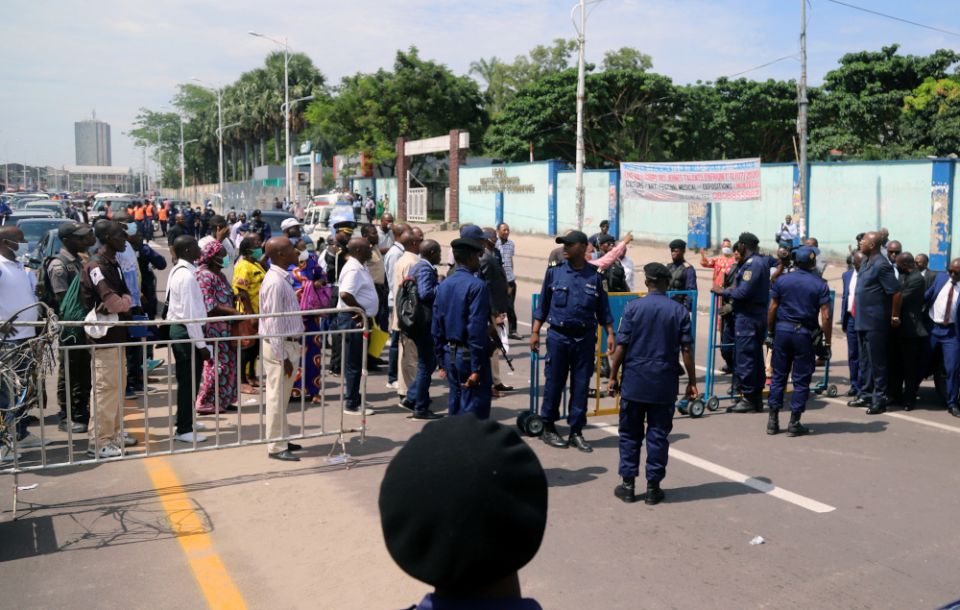 NAIROBI, Kenya — As the COVID-19 pandemic continues to spread in Congo, the country's Catholic bishops are insisting on measures to also fight Ebola, the deadly epidemic that has made a surprise return.

In the week beginning April 10, three new cases of the deadly disease were detected in eastern Congo.

Congolese health authorities reported that a 26-year-old man in Beni died of Ebola April 10. A young girl died on Easter, April 12, and a third person was undergoing treatment.

The new cases came just days before the World Health Organization was set to declare the epidemic ended in the central African country. Until then, 54 days had passed without a new case, and it was also 40 days after the last person with Ebola had been discharged from treatment.

"The reappearance was a surprise to all of us. We thought it (Ebola) had ended," Archbishop Marcel Utembi Tapa of Kisangani told Catholic News Service in a telephone interview. "All of us in the world have a problem — we are struggling with COVID-19. It is the main problem in the world now, but in our country, we are now struggling with both Ebola and COVID-19."

Utembi said with the reemergence of the hemorrhagic fever, the anti-Ebola measures had to continue. He said government medical teams had moved to the areas where the cases had been reported.

"We have not been able to meet as bishops due to COVID-19, but it's my opinion the Ebola measures, including washing hands and avoiding game meat, should continue," said the archbishop.

Since its emergence in eastern Congo in 2018, the Ebola epidemic has killed more than 2,250 people; more than 3,450 people have contracted the disease. The country's outbreak is the second-worst after the 2014-2016 West African outbreak.

Tedros Adhanom Ghebreyesus, the director-general of the World Health Organization, said the agency "kept response teams in Beni and other high-risk areas for precisely this reason."

Agency officials are describing the Congolese situation as triple challenge, as people face a humanitarian crisis, COVID-19 and now the reemergence of Ebola.

"Vaccines and contact tracing were being implemented to stop any further spread of the disease in and around the Beni region, the epicenter of the (Ebola) outbreak," said Ghislain Mukana, program manager for integrated health for Catholic Relief Services in Congo.

As it also struggled with a measles and cholera outbreak, Congo had confirmed 267 cases of COVID-19 and 22 deaths. Officials say the main transmission area is Kinshasa, the country's capital, although a small number of cases have also been reported in other regions.

"Unlike Ebola, which was a more localized outbreak, COVID-19 is a pandemic, and people are quickly recognizing the severity of the situation," said Mukana, while explaining that communities have had time to observe elsewhere the speed with which the virus spread and the prevention measures adopted. "My view is that populations in the DRC will be more receptive to prevention messages surrounding COVID-19 than they have been in areas that have been affected by Ebola."

He said humanitarian agencies were preparing the local communities for the COVID-19 challenge. The relief agency is implementing hygiene protocols, delivering emergency response and continuing with food security programs in the communities.

Mukana said Ebola taught officials the importance of accurate and appropriate information that can reach a large cross-section of the population.

Since March 18, Congo has suspended all international flights, demanded mandatory quarantine for arrivals, and closed schools, including universities. It also has suspended religious gatherings and sports activities, shut restaurants and prohibited funeral gatherings.

"While there have been some cases of rumors and misinformation, there is a generalized awareness of the virus and a corresponding adoption of preventive measures," said Mukana.

He said increased testing was needed, especially because of high rates of travel within the country.

Because of Ebola crisis, people 'can't even go to church'