Conversation, scrutiny and tea on the house 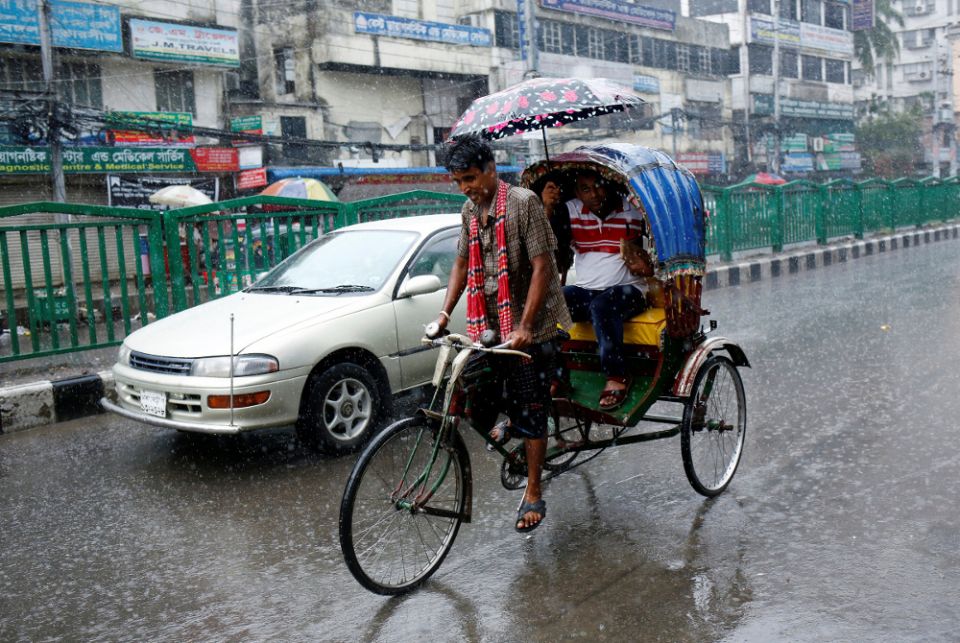 A rickshaw driver chauffeurs a passenger through the rain in Dhaka, Bangladesh, July 2. (CNS/Reuters/Mohammad Ponir Hossain)

For many years, Maryknoll Fr. Bob McCahill has been sending an annual letter to friends at Christmastime, chronicling his experience living among the people of Bangladesh. Since 1984, NCR has published his annual letter in the Christmas issue. Following is an edited version of his 2017 letter.

A bulldozer was busy recently along the main street through Shariatpur town destroying businesses that had been built illegally on the side of the road. An eatery, a repair shop, a tea stall, all constructed of lumber or tin, came crashing down, their owners standing nearby in order to salvage the remains. The owners knew this day would come. So, why did they not take action earlier to avoid the ruination? Were they hoping for a reprieve permitting them to stay? Or, perhaps, they simply knew of no other place to relocate. Space is scarce in Bangladesh.

"May I ask you a question?" a teenager asked me. "Surely," said I. "What is your religion … Islam?" My single word reply: "Christian." "Oh," he responded soberly, and then retreated. Numerous persons here during my now-concluded first year in their town like what I proposed to do with them, but not what I am. Why, they wondered, would be a Christian be so concerned for disabled Muslims? At many a tea stall, the aged foreign bicyclist was a topic of conversation and scrutiny.

One morning in Mohammadpur Bazar, youths described to me another youth suffering from "paralysis." I saw no need to go look for the fellow, for what could I possibly do for a 20-year-old stricken with polio? Nevertheless, his chums cajoled me, so I went and found Sumon with several maladies. We arranged for the ailing youth to travel via bicycle-van to the town's hospital. I am glad I went to see Sumon, for his friends' diagnosis had been mistaken. Usually it is a good idea to accompany folks when they persist in requesting it. Trust grows that way.

Kids here are wild about cricket. There was no school in session one day as I bicycled through Kachari village where boys were playing the game on the school grounds. I heard the smack of a ball on a bat. Quickly thereafter, a red ball appeared rolling down the road directly in front of me. Good hit, thought I, and if it keeps rolling they will have to fish the ball out of the drainage ditch beside the road. Accelerating, I caught up with the ball and halted it with one foot. Boys on both teams cheered the rescue.

A motorcycle-for-hire driver practicing his English on me, asked, "Your hour?" His question puzzled me because I saw he was wearing a wristwatch. So, I checked my pocket watch and told him. "7:07." He rubbed his chin in confusion, as if to say "How can I make this foreigner understand?" From nearby a fellow driver spoke up. "He wants to know your age." For clarification I asked: "In years or in hours? If he wants my age in hours [here I took some moments to calculate] slightly over 700,000 hours is my age." Now he can practice his arithmetic, too.

Junayed, an 18-month-old boy, is the only child of poor parents in a faraway village where I try to be useful. Twice I have been at hospitals with him and Lovely, his mother. Finally, a kind doctor told his mother frankly that her son will always have Down syndrome and she should expect little help from medicine. When I had first seen Junayed, I realized he had Down syndrome, so why make efforts to help him? Because everyone's life counts. Even though Junayed may never "earn his keep" or help his community, he deserves as much as can be provided by medical professionals and neighbors. Besides, Junayed does indeed enrich the community. Everyone loves the little guy.

Tea stall operator Hatem in Chandropur Bazar always seems pleased when I drop in. In that area of the district I have not yet been able to help many children, but he knows my purpose is to assist the disabled and seriously infirm children, and he wishes to have a part in that. Hatem does not charge me for the tea I drink. Always I offer him payment and he pleasantly refuses it. "We all serve that one," he proclaims while urging me to return soon for the "tea on the house."

One night, all night long, loudly amplified sermons and singsong praises of Allah were broadcast from the nearby mosque. Next day, a preacher glorified the most important duty of Muslims: the offering of Islamic ritual prayer. Often when I converse with Muslim men, I ask them what is the purpose of our lives. If they were to answer according to what their preachers emphasize, they might readily say "faithfulness to ritual prayer." When I propose love for others as the foremost purpose of our lives, they often nod thoughtfully in agreement. But they have been taught that ritual prayer is their highest religious obligation.

Ali Ahmed, an energetic 70-year-old advocate prides himself on being an honest lawyer. "The people love me" he declares. During the second largest of the Islamic festivals, Korbani Eid, he fed me at his home. After community prayers, Muslims stay at home on this feast day preparing and enjoying food. But also sharing their freshly slaughtered meat. As soon as he had fed me, his guest, Ali was off to distribute meat among the poor in his neighborhood. I always enjoy visiting Ali in his office, where he is surrounded by images of his favorites: Mahatma Gandhi, Karl Marx and Mother Teresa.

After a morning bicycle trip, I returned to town and sat reading the daily newspaper in the public library. Someone approached me. I lowered the newspaper and found before me an unknown, smiling 13-year-old lass with hand extended toward me. In her hand was a wee chocolate candy bar. Though much surprised, I accepted her gift. Not a word was uttered — the girls keep library rules better than the boys — as she withdrew silently. Even without words she made a Christian missioner feel welcomed, trusted and even liked.

Perspective | Conversation, scrutiny and tea on the house

This year, explore a deeper theology of Christmas