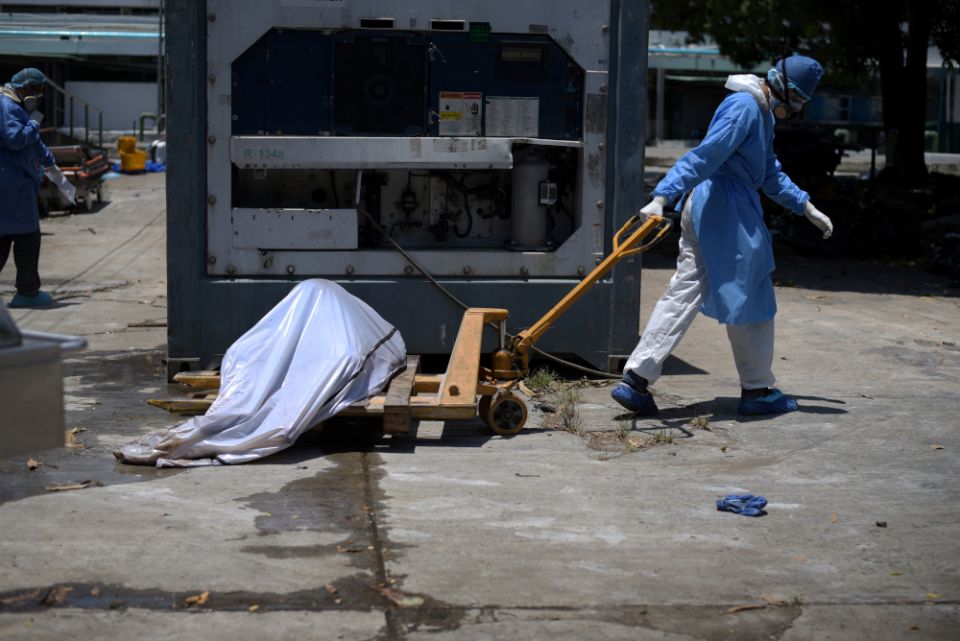 A health care worker wearing protective gear transports a dead body past a refrigerated container outside of a hospital in Guayaquil, Ecuador, April 3, 2020, during the COVID-19 pandemic. (CNS/Reuters/Vicente Gaibor del Pino)

Dramatic photos from the city show the bodies of people who died at home, wrapped in blankets or plastic and left on the street.

One carefully swaddled body was placed on a public bench, a bouquet of flowers on its chest and large umbrella shading it from Guayaquil's blistering sun. Propped against it was a sign indicating that the family had tried to call the emergency COVID number to no avail.

"The big problem is that we weren't prepared for this," Cabrera told Catholic News Service. "The number of infections is increasing daily. That makes the situation very difficult to manage."

Ecuador, a country of about 17 million people, had more than 3,700 confirmed COVID-19 cases as of April 6. More than 2,500 were in Guayaquil, a Pacific coast port city of about 3.5 million. Nationwide, 191 people had died of the virus, according to official figures. Health experts say the figure is probably higher, because people died of the virus without having been diagnosed.

Ten doctors had died of the virus and some 1,600 doctors, nurses, technicians and other health care workers had been diagnosed with COVID-19 or were suspected to have it.

Ecuador's government imposed a nationwide lockdown March 16, ordering all but essential businesses to close and allowing people to leave their homes only to buy food or medicine.

By then, however, the coronavirus had been spreading for several weeks in Guayaquil, where the first case was detected Feb. 29. The patient was an elderly Ecuadorian woman who had arrived from Spain and who attended social events in Guayaquil before showing symptoms of the virus.

Spain and Italy are the two European countries with the highest numbers of COVID cases and deaths.

A second cluster of cases appeared soon afterward, involving people who had traveled to Spain or Italy during the southern hemisphere summer vacation and returned to Ecuador in February, Anastasio Gallego, a member of the board of directors of Hogar de Cristo, a Catholic social services organization in Guayaquil, told CNS.

Some of those people also attended social events, including at least one large wedding, before showing symptoms. In some cases, women who worked as cooks or house cleaners for those families caught the virus and infected their own families, Gallego said.

Several soccer matches were also played in the first half of March, before Ecuador's league suspended its games.

Public health experts say the coronavirus, which is highly contagious and for which there is no vaccine or treatment, is often spread by people who show few or no symptoms.

Once the number of cases in Guayaquil began to increase, the health system and other government offices could not keep pace, Cabrera said.

Few COVID-19 test kits were available, and the samples had to be sent overland to Quito, the capital, for analysis, slowing the response. The government also issued confusing orders about burial and cremation, causing a backlog at cemeteries.

As hospitals became overwhelmed with COVID-19 cases, people with other health problems stayed away. Some of those who died at home may have had undiagnosed COVID-19, while others died of other causes, Gallego said.

The offices responsible for certifying deaths and authorizing the retrieval of bodies could not keep up with the caseload. That backlog and a lack of hearses and morgue facilities has created delays of several days in transferring bodies from homes to mortuaries.

The delays led some desperate families to wrap their loved ones' bodies in blankets or plastic and place them on the street. Because of a shortage of coffins, one company is providing heavy-duty, coffin-size cardboard boxes for burials.

Guayaquil's Catholic hospital is serving patients who have illnesses other than COVID-19, to take some pressure off the public hospitals that are handling COVID-19 cases, Cabrera said.

A telephone help line organized by the archdiocese and staffed by health professionals to provide advice and prescriptions has been overwhelmed with calls, he said.

The lockdown in Guayaquil has created economic hardship for many people in low-paying jobs whose income vanished overnight. The church is working with government agencies and social service organizations to provide food baskets to needy families identified by parishes, Cabrera said.

"This is a matter that touches everyone," he said.

World | COVID-19 in Guayaquil: 'This is a matter that touches everyone'