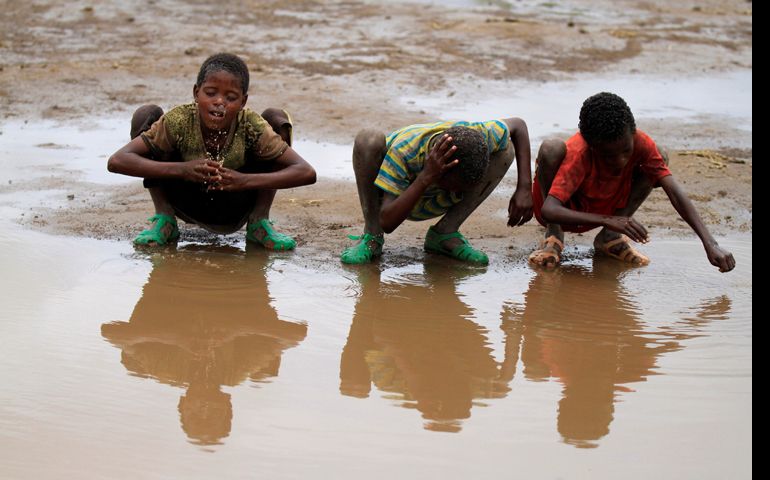 He realized they were taking the second biscuit home to share with younger siblings or their mothers.

Alarming levels of hunger, caused by the worst drought in about half a century, has left about 10 percent of all Ethiopians -- some 10 million in all -- in need of food aid, Kozar said in a May 11 telephone interview from Addis Ababa, Ethiopia's capital.

When the rains have come, as they did in April as part of the El Nino weather phenomenon that drove the drought, flash flooding has resulted. The most recent floods left at least 50 people dead and nearly 120,000 displaced.

"People in this mountainous, very rural country face enormous challenges," said Kozar, who was on a six-day visit to the country in the Horn of Africa.

Cattle, sheep and other animals essential to people's livelihoods have been lost in the landslides from the torrential rains, he said.

"It will be many months before there is any yield from newly planted crops," Kozar said. "Three weeks of rain is not going to end this drought or stop its far-reaching and devastating consequences."

More than 83 percent of Ethiopians live in rural areas, where most rely on rain-fed agriculture.

"The food needs here are critical," particularly for infants and pregnant and breast-feeding women, he said.

On a visit to a "humble parish school with no lighting" in Aiga, where CNEWA runs one of its school food programs, Kozar heard from teachers who told him that children often faint from hunger when they arrive for the day's lessons.

"It's common for children to walk a one- to three-hour journey on very steep mountainous terrain to get to school and then make the same journey home again," he said.

About 500 people attended a May 9 funeral in a village church that required a four- to seven-hour walk from remote areas for most of mourners, Msgr. Kozar said.

"And that was just one-way," he said, recalling that he saw the corpse being carried on the shoulders of men who were walking a long distance along "paths with a terrifying drop."

The "devotion of the people I have met here, young and old, is incredible," Kozar said.

"The mountainous trails are very dangerous, but still, people come regularly to Mass," he added. "The Christian tradition is very significant to the lives of the people of Ethiopia."

About 1 percent of Ethiopia's population is Catholic, yet the church is the second-largest provider of health and education services, after the government.

With very few level areas on which to grow crops, Ethiopians plant "potatoes, corn, barley, whatever they can" in terraces on the slopes of mountains.

"I am amazed at what people here do with the little they have," he said, noting that he visited a Catholic agricultural college where subsistence farmers were taught how to improve farming methods and advised on which crops provide good nutrition.

Catholic Relief Services complements the work of CNEWA. Kim Pozniak, CRS communications officer, described the landscape as "apocalyptic, with very little vegetation except dried-out scrub and bushes with thorns the length of my forearm" after an April visit to parts of Ethiopia hardest hit by the drought.

"I saw donkeys that had fallen down dead while their owners were taking them to get water" to carry back home, Pozniak said in a May 13 telephone interview.

Animals are Ethiopians' "most valuable asset," Pozniak said, and the drought has forced many families to sell any livestock they have out of desperation to feed their families.

CRS is distributing monthly food rations to 2.8 million Ethiopians, as well as running long-term education and aid and development programs in the country, she said.

In many cases, "we make simple interventions that have a huge impact," she explained, adding that the agency has introduced savings and loans groups and trained people in water storage so it is available when crops are planted.