Faith and globalization: the Italian perspective 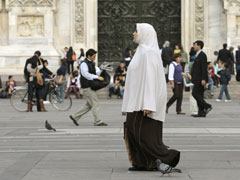 A Muslim woman walks through the Piazza del Duomo in Milan, Italy, in October 2009. (Reuters/Alessandro Garofalo)

The 21st century is unlikely to see a fundamental conflict of political ideology in the way the 20th century was dominated by it. But it might well see a clash of religious or cultural ideology.

The reason the study and understanding of religion matters today more than ever before is this: The world is undergoing rapid and tumultuous change. Globalization, accelerated by the communications revolution, is driving much of it, breaking down boundaries, altering the composition of whole communities, even countries. The changing circumstances create new overlapping challenges that can only be met effectively together: terrorism, financial crises, climate change, even how we respond to the Arab Spring.

Interdependence is now the recognized human condition. Interconnectedness is the reality. Trade, migration, travel bring different people, cultures and religions face-to-face in our modern cities, sometimes not under conditions of their own choosing.

The Internet creates no less important encounters, most of which are positive. But it can also bring division and social hostility, and some of the consequences are placed at the door of religion. Today about a third of the world’s population lives in countries where government restrictions on religion and social hostility based on religious difference are increasing.

So people often find it harder to practice their faith, and faith itself can become synonymous with hatred and sectarianism, not reconciliation and justice, the core values of the world’s faiths. The right to freedom of religion defined in the U.N. Universal Declaration of Human Rights is abrogated often in the name of a spurious national security. Restrictions on the legitimate rights of religious minorities do not add to social harmony. The evidence suggests rather that they are correlated with growing religiously linked conflict and other negative outcomes. Nor is it good news for governments, which lose legitimacy with their own citizens.

Europe is far from immune to these pressures. In a recent Pew Research Center report, Italy in 2009 fell into the category of countries with a low level of government restrictions on religion but a moderate level of social hostility toward people of other faiths. As in many countries in southern Europe, Catholic Italy is increasingly aware of being the northern shore neighbor of south shore Muslim North Africa.

This is the background to my Faith Foundation holding, in collaboration with the Fondazione per la Sussidiarietà, LUISS Guido Carli University in Rome, University of Bologna, Catholic University of the Sacred Heart in Milan and Ca’ Foscari University in Venice, a series of four seminars during autumn 2011. Our Faith and Globalization initiative is an engagement with universities around the world to analyze the importance of religion in the interconnected world of the 21st century.

The Italian perspective on this series probes the role of religion in the complex contemporary challenges facing Italian society. Firstly, there is the changing significance of faith with the growing -- perceived -- binary opposition between religious and secular thinking about the ordering of society and the prioritizing of its values. Secondly, there is the need to integrate immigrant religious minorities, most notably Muslim migrants in a traditionally Catholic society. This makes new demands in education, pastoral care, interfaith relations and the practical implementation of Catholic social teaching.

Italy is not alone in coming to terms with the demands of religious pluralism. Europe is not of a fixed mind about the role of religion in the public life, nor about the full implications of the universal right to freedom of religion. Around the world, there are successful examples of democracy-friendly religion often associated with religion-friendly democracy -- but also their absence. Where they are missing, religion is seen as part of the problem, with secular democrats reluctant to see religion invade the public square.

How secularism, or laïcité, deals with participation by people of faith in public debate and civil society, religion and its relationship to the state is fast becoming a key political question for Europe today. We have seen legitimate and illegitimate ways of religions exerting influence in the public domain, the different forms of the republican tradition, and other secular approaches to religion in the public square. But what should it mean for a democracy to be friendly to religion and how can democratic governments safeguard the rights of religious minorities?

Statesmen and political leaders neglect the importance of religious identity today at their peril. The tension between individual and communal religious rights, the need for an open identity at ease with diversity (l’identità aperta), for religious freedom put at the heart of human rights, are all common European concerns. Creating a culture of dialogue, respect and understanding for other faiths is not an optional extra. “The human person has a right to religious freedom, and all people, in every part of the world, should be immune from coercion on the part of individuals, social groups and every human power,” John Paul II wrote in Ecclesia in Europa.

But, for an increasingly secularized Europe, even more fundamental questions have to be to be asked, and answered: Why does faith matter in a globalized world? Then follows the pressing supplementary question: What virtues and values are required, for this stage of globalization, to sustain the political and religious pluralism of the 21st-century democratic nation-state? And what education do young people need to prepare themselves for this world where different faiths -- inescapably -- meet?

From my experience as British prime minister, faith was a powerful force for good in the field of international development, in health and in education. We should investigate and build on commonalities in the understanding of justice and charity as core religious themes of the monotheistic faiths.

The study of faith and globalization is becoming essential for modern academic life. I would like to see it take root in Italian universities. This will help us study the impact of religion, good and bad. I hope to show that ultimately religion can do good. One striking example of a globalized, networked church is led by the Unione Superiori Maggiore d’Italia, which, working with women religious around the world, counters sexual trafficking, the dark underside of globalization.

An Italian champion of this pastoral care for trafficked women, Consolata Missionary Sr. Eugenia Bonetti, once boasted, “We have a better network than al-Qaeda.” May this remain the dominant reality of faith and globalization in the second decade after 9/11.

Read the full text of Tony Blair's speech, given in Milan on Nov. 10 as part of the seminar series.

[Tony Blair is founder and patron of the Tony Blair Faith Foundation (www.tonyblairfaithfoundation.org). He is pleased to be working in collaboration with Fondazione per la Sussidiarietà on this seminar series. More articles from this series are online at www.ncronline.org/node/27306.]