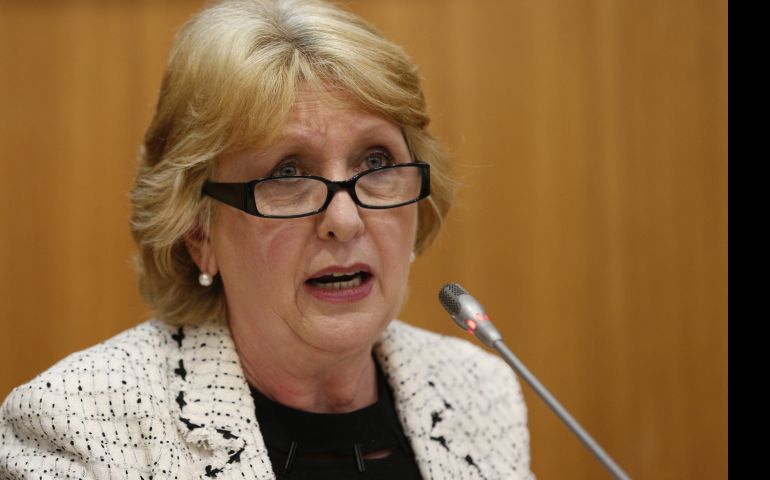 Mary McAleese, president of Ireland from 1997 to 2011, speaks at a conference titled, "Renewing the Church in a Secular Age," at the Pontifical Gregorian University in Rome March 5. (CNS/Paul Haring)

Dublin — Former President of Ireland and well-known Catholic Mary McAleese has accused the church of being a conduit for homophobia. However, while admitting that she has often considered leaving the Catholic church over its stance of issues like gays and female ordination, she has always felt “it calls me home.”

In an exclusive interview with The Irish Catholic newspaper, McAleese discusses her decision to defy church leaders and campaign in favor of same-sex marriage during a recent referendum.

In the first major interview since stepping down as Ireland’s second female president four years ago, she insists “it would have been an act of craven and unchristian cowardice” to have stayed out of the referendum debate.

“My views are founded emphatically in the Gospel. That’s where they come from. They don’t come from some weird Godless secular world,” she said.

During the referendum campaign, which saw Ireland become the first country in the world to legalize same-sex marriage by way of a popular vote, she was criticized by some commentators for saying that her conviction was based on her faith.

But she is unrepentant.

“What infuses me, what is the essence of my being, is my faith in Christ,” she said. “And it is the love of Christ and his offer of mercy to the world, the sense that every single person is a child of God, it is that which infuses me, gives me the outlook I have on the world.”

“I am ashamed, frankly, of my church’s failure to be a champion of gay rights and of women’s rights.”

McAleese thinks that if Pope Francis is serious about welcoming gay Catholics, it would mean the church “not adhering to views from the Old Testament about homosexuality, which have long since been discredited by medical science,” and being “actively engaged in today’s world with all the information that it has [about homosexuality].

“It would mean looking at the language that the church uses to see whether that language is capable of hurt, and of conducing to homophobia, which it most certainly does,” she said.

“I see my church as a major conduit for homophobia which is toxic, a form of hatred that has nothing to do with Christ and is unchristian.”

She would “like to see the church take responsibility for the extent to which its words and its language conduces to homophobia” citing such words as “evil” in relation to homosexual acts and “disordered.” These are not “ancient” words, she says, but were written by Pope Benedict XVI himself: “It is not enough to say we love the sinner but not the sin.”

She thinks that the church should seek forgiveness for some of the harsher language that has been used to describe gay people.

“The church has to be able to say that at times, in God’s name, we got some things badly wrong and bad things happened,” she said. “The church is not good at saying we managed to get things wrong and doing something about it.”

McAleese defends and elaborates on her recent statement that church teaching on homosexuality is “wrong.”

McAleese, who before she was elected president in 1997 often represented the Irish bishops’ conference in meetings with politicians, is encouraged by Francis claiming he has created a culture of debate in the church not seen since the Second Vatican Council.

“We thought there was room for debate after Vatican II but then came John Paul II and Benedict and we got this line about obedience and not challenging the Magisterium, without it being explained to us that obedience is not the same as abject and craven silence in the face of things that are manifestly incorrect,” she said.

McAleese describes Francis as “by far the most intriguing pope of my lifetime” and after just two and a half years, “his greatest legacy to the church has been his welcoming of debate after the stultifying and suffocating imposed silence” of his two immediate predecessors.

Their time saw “this culture of imposed silence, this idea that unless you conformed 100 percent to the church’s magisterium in everything you said, you were expected to remain silent,” she said.

“The Catholic intellectual world has been suffocated by this inability to talk, debate, and discuss, to push the envelope without being seen as being heretical or schismatic.”

She said Francis’ “wonderful gift to the church is to welcome the debate that has been going on any way in all the quiet spaces where two or more were gathered, and festering in frustration, and he has just let it out and that is a joy.”

“I am more comfortable with the chaos of debate than in the festering suffocation of silence,” McAleese said. “I think Francis is allowing the church to breathe and that is a wonderful thing. I don’t agree with him on everything but I really like the man.”

One issue Francis has so far done nothing on, McAleese believes, is the issue of women in the church. Her starting point is “my church’s long history of misogyny, it has never been a champion of women.” She cites numerous examples of what she considers misogyny ranging from a 19th-century ban on women singing in church choirs, to the description of women as “objects of suspicion” in the 1917 Code of Canon Law to a current Vatican rule which gives bishops the power to permit girl altar servers but parish priests the ultimate power to ban them.

McAleese says Mary “is more complex than the idealized version of the Virgin Mary.” Rather she was “a terrified 14-year-old child” whose obedience to God expressed in the words “behold, I am the handmaid of the Lord; let it be according to your word” only came after she had plucked up the courage to question the Angel Gabriel and receive his assurance. “There is a process here and we tend to have that process edited out.”

McAleese is telling us that the Virgin Mary, child and all that she was, was far from silent and there are lessons for us.

Asked if she was ever tempted to look to another denomination, she admitted to “looking at options” regularly but “had never found anything to attract me because the Catholic church is woven into me and I relate to it and for all its messiness it calls me home.”

McAleese “accepts the teaching that legislation and governance is always going to be in the hands of the pope and bishops who are always going to be male until we get over this argument over whether women can or cannot be admitted to the priesthood.”

“But now we need advisory talkback facilities and those are best organized at diocesan, national and of course [the] universal church level,” she said.