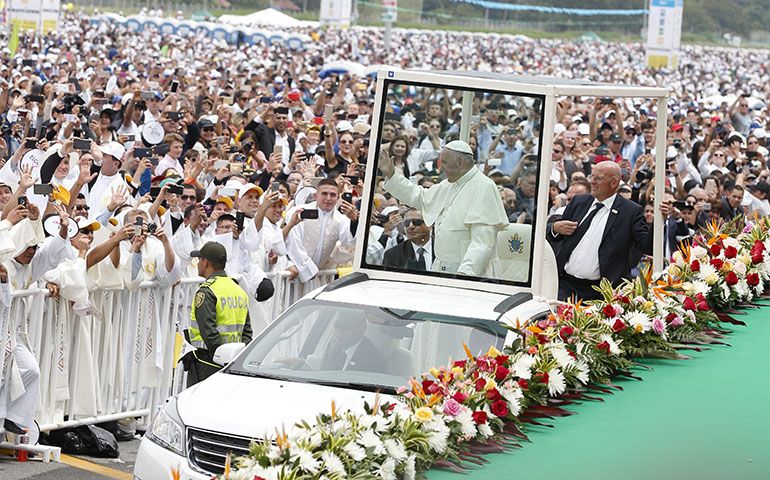 MEDELLÍN, COLOMBIA — Pope Francis told a crowd of more than a million here Sept. 9 that being a Christian is not about how closely you follow doctrinal laws or precepts, but rather how you live out the essential values of the faith.

In a homily during an outdoor Mass in this northern Colombian city — famous as the site of a landmark 1968 bishops' meeting that called for a "preferential option for the poor" — the pontiff said Christians should not be "paralyzed by a rigorous interpretation" of the law.

"Jesus teaches that being in relationship with God cannot be a cold attachment to norms and laws, nor the observance of some outward actions that do not lead to a real change of life," Francis told the crowds gathered on an open field in light rain at Medellín's Enrique Olaya Herrera airport.

"Neither can our discipleship simply be motivated by custom because we have a baptismal certificate," said the pope, speaking on a platform in front of a backdrop of the verdant green Andean hillside, dotted with skyscrapers.

"It is not something static, but a continuous movement towards Christ," he told the mass of people, which stretched farther than the eye could see. "It is not simply the fidelity to making a doctrine explicit, but rather the experience of the Lord’s living, kindly and active presence, an ongoing formation by listening to his word."

Francis was speaking on his third full day in Colombia, which he is visiting through Sept. 10. The focus of the visit has been reconciliation following passage of a peace agreement ending a bloody 50-year conflict among the Colombian government and rebel guerilla forces.

The pope flew to Medellín from the capital of Bogotá, where he has been spending each night in Colombia. 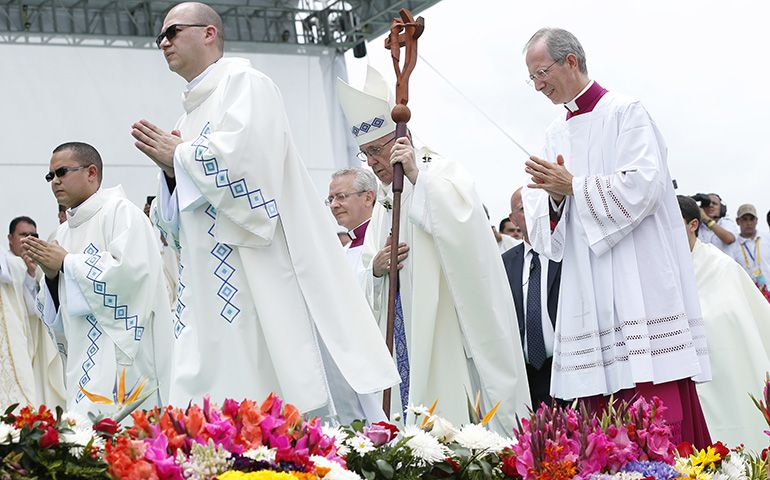 Medellín, about 260 miles northwest of Bogotá, is the Colombia's second-largest city with a population of some 2.5 million. Once the home of Pablo Escobar and notorious instances of gun and drug violence, the city is now praised for its development policies, educational system and newly constructed commuter rail network.

The city is also known in Catholic memory as the location of the 1968 meeting of the regional Latin American Episcopal Conference, in which the prelates committed themselves to "defend the rights of the poor and oppressed" and helped promote the rise of liberation theology.

Francis was reflecting in his homily Sept. 9 on a reading from Luke's Gospel, in which some Pharisees rebuke Jesus for allowing his disciples to pick wheat to eat on the Sabbath.

"For the Lord, as also for the first community, it is of the greatest importance that we who call ourselves disciples not cling to a certain style or to particular practices that cause us to be more like some Pharisees than like Jesus," the pope told the crowds.

"Jesus' freedom contrasts with the lack of freedom seen in the doctors of the law of that time, who were paralyzed by a rigorous interpretation and practice of that law," he said.

The Mass celebrated the feast day of St. Peter Claver, a 17th-century Spanish Jesuit missionary in Colombia known for his ministry to African slaves. 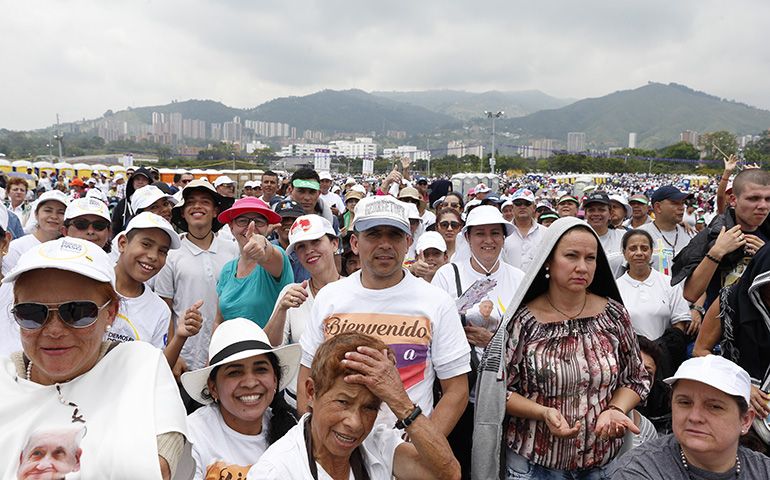 Francis, who is to visit Claver's adopted home of Cartagena on the Colombian coast Sept. 10, said the saint understood "that he could not remain indifferent to the suffering of the most helpless and mistreated of his time, and that he had to do something to alleviate their suffering."

"We cannot be Christians who continually put up 'do not enter' signs, nor can we consider that this space is mine or yours alone, or that we can claim ownership of something that is absolutely not ours," said the pontiff.

"The church is not ours, she is God’s; he is the owner of the temple and the field; everyone has a place, everyone is invited to find here, and among us, his or her nourishment," he continued. "We are simple servants and we cannot prevent this encounter."

Later on Sept. 9, Francis is to visit a house run by the Medellín archdiocese for children who are victims of violence. He is then scheduled to address a meeting of some 12,000 priests, religious, seminarians, and their families before returning to Bogotá in the evening.

After visiting Cartagena Sept. 10, Francis is to fly back to Rome, landing in his diocese around mid-day Sept. 11.

World | Francis in Colombia: Christianity about values, not 'cold attachment to norms'