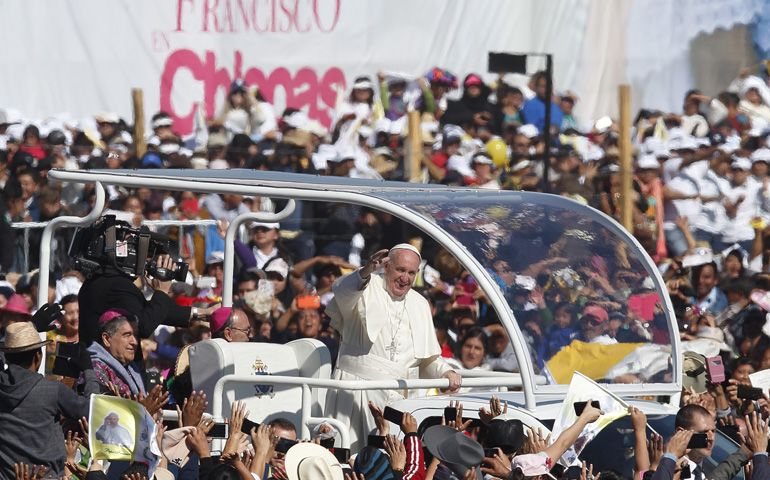 Pope Francis greets the crowd as he arrives to celebrate Mass with the indigenous community from Chiapas Feb. 15 in Mexico. (CNS/Paul Haring)
This article appears in the Francis in Mexico feature series. View the full series.

San Cristobal De Las Casas, Chiapas, Mexico — style="line-height: 20.8px;">Standing on the land that Mexico's native peoples have called home since millennia before the founding of the modern country, Pope Francis on Monday decried their treatment throughout history -- saying they had been "misunderstood and excluded" from society and treated inferior to others.

In a Mass organized to celebrate Mexico's diversity of indigenous cultures, the pontiff also said that native peoples have a unique role to play in helping societies learn how to respond to global climate change, which he called "one of the greatest environmental crises in world history."

"You have much to teach us!" Francis told the some 100,000 present, many part of indigenous communities who wore their traditional garments. "Yet, on many occasions, in a systematic and organized way, your* people have been misunderstood and excluded from society."

"Some have considered your values, culture and traditions to be inferior," the pope continued. "Others, intoxicated by power, money and market trends, have stolen your lands or contaminated them."

"How sad this is!" Francis exhorted. "How worthwhile it would be for each of us to examine our conscience and learn to say, 'Forgive me!' Today’s world, ravaged as it is by a throwaway culture, needs you!"

Francis was speaking Monday in a packed outdoor Mass in this historic cultural center of the Mexican state of Chiapas, located on the country's southern border with Guatemala. The crowd was filled with indigenous people, who are estimated to make up a third of the state's population of about 5.2 million.

Excitement to see the pope was very high. Lines began forming 3-5 miles away from the Mass site as early as 3 a.m. in a cold-fog-laced morning that shrouded people like ghosts outside the municipal sports stadium.

Many had traveled from around the region for the opportunity. Arturo Rodriguez, with his wife and 8-year-old son, had driven two days from San Salvador, El Salvador, to reach San Cristobal.*

"We came because the pope is bringing his blessing to the region," said Rodriguez. "We believe in his message of peace."

“The pope brings a message of hope and equality for our community,” said Magdaleno Gomez, from the ethnic Mayan Tzotzil group. “The hope of equality with people who are not indigenous is very important. The pope knows we are all the same.”

Francis' focus on exploitation of native cultures in his homily Monday will likely carry special significance throughout Chiapas, where poverty, inequality and hunger rates remain among the highest in Mexico.

The state was also the location of Mexico's 1994 Zapatista uprising, which saw a group of armed militants expressing alignment with indigenous cultures fight against implementation of the North American Free Trade Agreement (NAFTA).

The militants, who seized towns throughout the state for days before negotiation of a ceasefire, said the trade pact would only increase the gap between rich and poor.

The pope arrived in San Cristobal by helicopter from nearby Tuxtla Gutiérrez. As his helicopter approached the sports stadium, some in the crowd ran back and forth, at times knocking one another down as they pressed against fences to see the delegation's arrival.

Inside the stadium, thousands of people sat on wood stools or milled around waiting for the pope. As Francis arrived, the popemobile took a circuitous route through the crowd, winding one way and another to reach as many sections of the stadium as possible.

The pope was greeted with shouts and cheers as he passed, one hand extended to wave.

Francis' remarks Monday were just the latest in a string of forceful comments he has made during his Mexico trip.

Speaking to the country's Catholic bishops Saturday, the pontiff gave one of his most direct and blunt outlines for what he expects from Catholic prelates. He warned the Mexican episcopate against words that are "empty figures of speech" and inaction that "squanders" their country's history.

Visiting a crime-plagued suburb north of Mexico City Sunday, the pope launched a blistering critique against the tripartite temptations of wealth, vanity, and pride -- criticizing particularly a wealth that he said "tastes of pain, bitterness and suffering."

Francis began his homily Monday with a reflection on the Old Testament's account of how God gave Moses a set of laws for the people of Israel, saying it was "a law that would help the People of God to live in the freedom to which they were called."

"One hears the yearning to live in freedom, there is a longing which contemplates a promised land where oppression, mistreatment and humiliation are not the currency of the day," said the pontiff.

"In the heart of man and in the memory of many of our peoples is imprinted this yearning for a land, for a time when human corruption will be overcome by fraternity, when injustice will be conquered by solidarity and when violence will be silenced by peace," he continued.

"In many ways there have been endeavors to subdue and lull our children and young people into a kind of lassitude by suggesting that nothing can change, that their dreams can never come true," said Francis.

Faced with that attempt to say nothing can change, the pope quoted from his recent encyclical on the environment, Laudato Si', to say that "creation itself ... raises an objection" to the silencing of peoples.

"The environmental challenge that we are experiencing and its human causes, affects us all and demands our response," said the pontiff. "We can no longer remain silent before one of the greatest environmental crises in world history."

"In this regard, you have much to teach us!" Francis told the indigenous. "Your peoples, as the bishops of Latin America have recognized, know how to interact harmoniously with nature."

The pontiff flew about 500 miles southwest to Chiapas Monday from Mexico City, where he is staying each night of his six-day trip to Mexico. He celebrated the Mass in the morning at a sports stadium in San Cristóbal de las Casas, a former capital of Chiapas and one of the first cities colonized by the Spanish in the Western hemisphere.

The pope will travel in the afternoon to Tuxtla Gutiérrez, the current state capital, for a meeting with families before heading back to Mexico City.

Monday's Mass was celebrated in Spanish and the three Mayan languages of Tzeltal, Tzotzil, and Ch’ol. There are twelve federally recognized indigenous ethnicities in Chiapas, and about 36 percent of indigenous people speak only their native language and not Spanish.

Francis is visiting Mexico through Wednesday.

In a sign of continued sensitivity to the social unrest in the area, Francis' decision to come to Chiapas during his visit is reported to have been opposed by President Enrique Peña Nieto.

On Tuesday, the pope will fly west to Morelia, a city some 200 miles west of the capital that has been racked by drug violence. He will celebrate Mass at the cathedral and host a meeting with young people.

On Wednesday, Francis will fly north to the border city of Ciudad Juarez, on the other side of El Paso, Texas. In that visit, the pope is expected to address the situation of migrants on the U.S.-Mexico border.

One priest-official of the San Cristóbal de las Casas diocese drew a line between Francis' visits to Chiapas, Morelia and Juarez, saying each stop identifies an issue that is "very important" for the country.

Jesuit Fr. Pedro Arriaga Alarcón, one of seven episcopal vicars for the diocese, said he hoped the pontiff's visit would encourage the country's leaders to realize they have to work for solutions to national issues "not only with their minds" but also by "putting their hearts with the people of Mexico."

*This story has been updated to fix a typo in a quote and to clarify language.

'Enough with the deaths': Mexican clergy reiterate Chiapas is in crisis