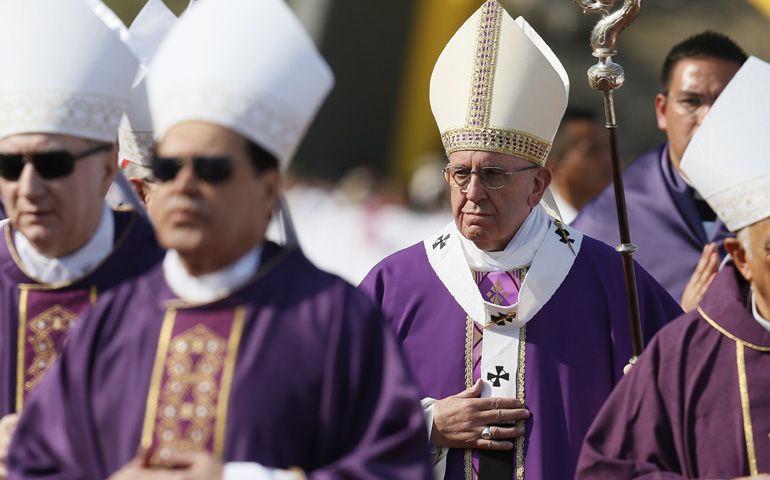 Pope Francis arrives to celebrate Mass with priests and religious at a stadium in Morelia, Mexico, Feb. 16. (CNS/Paul Haring)
This article appears in the Francis in Mexico feature series. View the full series.

Morelia, Mexico — Pope Francis has movingly asked Catholic priests and religious in one of Mexico's most violent cities, described by some as being in "near anarchy" due to destruction wrought by drug cartels, to not give up on building a better society even in the face of "paralyzing injustice."

In a public Mass in this central Mexican city, once known as "the garden of New Spain" but now known more as a place of violence, the pontiff asked people to not give into what he called the temptation of "listless resignation."

"What temptation can come to us from places often dominated by violence, corruption, drug trafficking, disregard for human dignity, and indifference in the face of suffering and vulnerability?" Francis asked some 20,000 priests and religious at the celebration, many of whom witness each of the things he listed on a daily basis.

"What temptation might we suffer over and over again ... when faced with this reality that seems to have become a permanent system?" the pope asked.

"Faced with this reality, the devil can overcome us with one of his favorite weapons: resignation," said Francis.

"A resignation that not only hinders our looking to the future, but also thwarts our desire to take risks and to change," the pontiff called it before reciting the line from the Christian prayer: "'Our Father, lead us not into temptation.'"

Francis was speaking Tuesday in a packed outdoor Mass at Morelia's Venustiano Carranza Stadium. Located about 200 miles west of Mexico City in the country's Michoacán state, Morelia has been living a dark period of violence, mainly stemming from fights for control of methamphetamine production.

Before the Mass, however, there was a joyous festival of celebration.

As the crowds awaited the pope's arrival, a band led by priests led them in upbeat guitar music. Some took to the open field of the stadium to form conga lines. One of the lines, filled with priests in cassocks, was led by a priest wearing a huge mascot head.

Once Francis arrived in the stadium he did a tour in a small vehicle around the running track, which led to many of the priests and religious running along the track to get a glimpse of him.

A priest led the crowd in welcoming the pontiff, exclaiming: "Who is the vicar of Christ? Pope Francis!"

The pontiff was to experience one of the worst scenes of the violence later Tuesday. After celebrating the Mass, Francis was to make a visit to the city's cathedral, which is located on a public square where two grenades exploded on Mexican Independence Day in 2008, killing eight people and wounding hundreds.

Francis was reflecting in his homily Tuesday on the portion in Matthew's Gospel where Jesus first teaches his disciples the Our Father prayer. The pope mused on how prayer influences life and vice versa.

The pope said that for Jesus saying the words "Our Father" has "no trace of routine or mere repetition."

"On the contrary, it contains a sense of life, of experience, of authenticity," said Francis. "With these two words, 'Our Father,' he knew how to live praying and to pray living."

The pope also said that when people are tempted to be resigned, they can look into their memories and their history to "find the 'stuff' of which we are made." In that vein, he said that people from Michoacán "cannot overlook" the story of Vasco de Quiroga, the first bishop of the area.

A 16th century Spaniard, de Quiroga is known for having advocated for better treatment of Mexico's native peoples by colonial Spain and for fighting against laws allowing the keeping of indigenous as slaves.

The situation of the native peoples "far from tempting him to listless resignation, succeeded in kindling his faith, strengthening his compassion and inspiring him to carry out plans that were a 'breath of fresh air' in the midst of so much paralyzing injustice," said Francis.

"The pain and suffering of his brothers and sisters became his prayer, and his prayer led to his response," said the pope.

Like in the rest of Mexico, anticipation in Morelia for the pontiff's visit was very high. An estimated 300,000 people were lining the route from the local airport to the stadium to greet Francis. Many were holding yellow and white balloons and Vatican flags that also had the pope's coat of arms printed on them.

Francis is visiting Mexico through Wednesday. He is staying each night in the capital of Mexico City, but traveling each day to different areas south, west, and north.

Later on Tuesday he is to meet with young people in Morelia before heading back to the capital for the night.

The pontiff will fly north Wednesday to the border city of Ciudad Juarez, on the other side of El Paso, Texas. The pope will visit a local penitentiary there and celebrate a public Mass just south of the U.S.-Mexico border.

Pope: Jesus prays for everyone each day

When it is dark, praying communities give us eyes to see the sacred at work

Most Americans pray for healing