by Joshua J. McElwee
World
This article appears in the Francis in Bulgaria and North Macedonia feature series. View the full series. 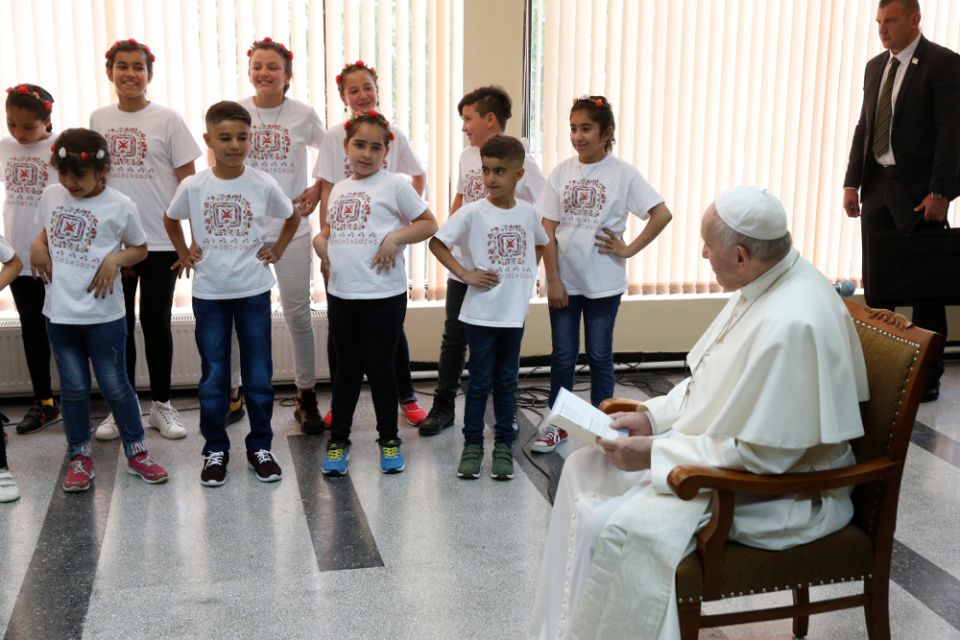 SOFIA and RAKOVSKI, BULGARIA — Pope Francis encouraged Iraqi and Syrian refugees adapting to life in Eastern Europe May 6, telling them to have hope despite whatever sufferings they have endured.

After hearing 12 children sing during a visit to a refugee center on the outskirts of Sofia, the pontiff told the migrants taking part in the encounter that he was wishing the best for them, and those they left behind.

"There is always hope," Francis told the about 50 refugees at the Vrazhdebna camp. Children, he said, "carry joy in your journey, a journey that can bring suffering, the suffering of leaving a country and trying to integrate in another."

"Today the world of migrants and refugees is a kind of cross, the cross of humanity," he said. "It's a cross many people are suffering."

"I wish the best to you and your co-citizens, who you left in your country," he said. "May God bless you."

The status of refugees has been a central focus of the visit, as Bulgaria has hosted tens of thousands of mainly Middle Eastern refugees fleeing violence who have come into the country through its eastern neighbor of Turkey.

The European Commission, the European Union's executive branch, has expressed concern about the living conditions for migrants in the country, which is part of the 28-member block, and sent a letter of formal notice in November for non-compliance with EU law over the issue.

Although Francis' visit to the Vrazhdebna center was brief, it was clearly emotional for some of the families. After the pope spoke, some of the girls, wearing red roses in their hair, came up to take a photo with him, their parents smiling widely.

One woman identified herself as being from Mosul, Iraq. She said that while she and her seven children are Muslim, it "meant a great deal" to them that Francis made the visit. Another man, also from Mosul, held his young daughter in the air so she could better see the pope.

Caritas Sofia, an arm of the international Catholic charity organization, helps run language and art classes for children at three refugee centers across Bulgaria. One Caritas volunteer taking part in the meeting, who is also originally from Iraq, said the focus in their efforts is on both playing and learning.

Another Caritas volunteer, Silsila Mahbub, greeted Francis on behalf of the other volunteers and the refugees. She told the pope that the people working there see all people as children of God, regardless of their race or religion.

"We Catholics want to make felt, in a concrete way, the love of God," said Mahbub. "We commit ourselves to spread the merciful love of God to our brothers and sisters."

Shortly after visiting the refugee center, Francis flew to Rakovski, a small town about 100 miles east of Sofia. While there he celebrated a First Communion Mass and held a meeting with local Catholics.

Rakovski is considered the largest Catholic city in Bulgaria, where Catholics are a tiny minority and about 60 percent of people identify as Eastern Orthodox. 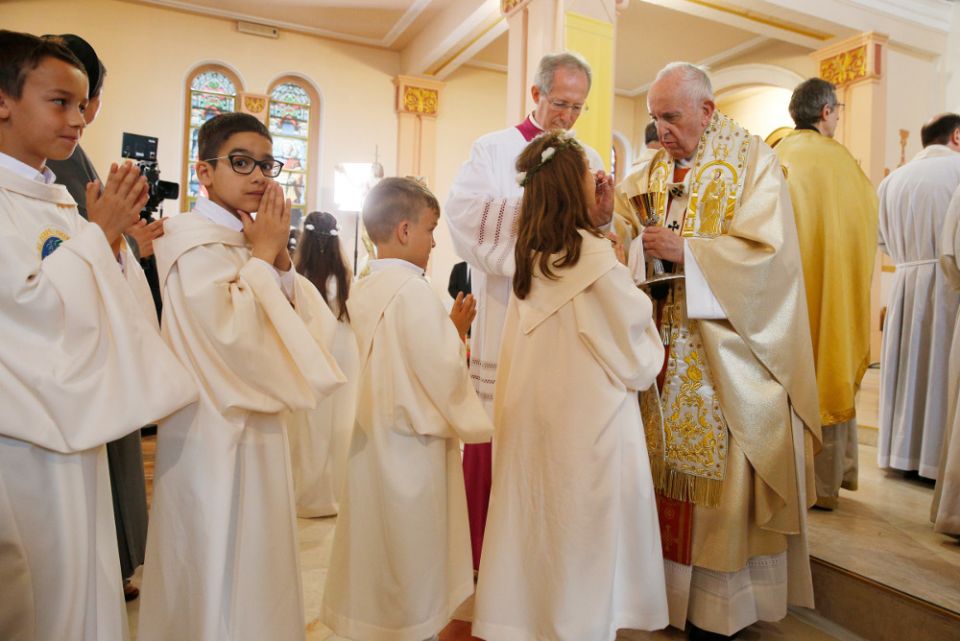 Pope Francis gives first Communion May 6 to children during a Mass at the Church of the Sacred Heart in Rakovski, Bulgaria. (CNS/Paul Haring)

Francis spoke about his time with the refugees during his meeting at St. Michael the Archangel parish. Referencing Mahbub's remarks to him, the pontiff said the volunteers at the center "have learned to see with God's own eyes."

"God is not worried about details, but seeks out and awaits each person with a father’s eyes," said Francis.

"Seeing with the eyes of faith is a summons not to spend your life pinning labels, classifying those who are worthy of love and those who are not, but trying to create conditions in which every person can feel loved, especially those who feel forgotten by God because they are forgotten by their brothers and sisters," he said.

Francis is to return to Sofia in the afternoon May 6 for an interreligious peace meeting in the city's central square. He travels to North Macedonia May 7 on his way back to Rome.

Christians' first mission is to witness that God is love, pope says

Cardinal calls for resettlement of asylum-seekers from Greek island