Gays to defend their right to be Catholic 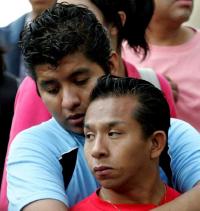 MEXICO CITY -- Social activists and Catholics in gay, lesbian and transsexual unions are discussing public actions to be taken when Mexico hosts the Sixth World Meeting of Families organized by the Vatican Jan. 13-18.

The plans will be revealed in early January, according to Víctor Espíndola, director of the Mexican Sexual Diversity News Agency, a nongovernmental organization specializing in lesbian, gay, bisexual, transgender and transsexual community-related issues.

The World Meeting of Families in the Mexican capital will be the sixth edition of an event organized by the Catholic church since 1994 -- the previous editions were held in Italy, Brazil, the Philippines and Spain -- that revolves around the concept that a family can only be formed by a man, a woman and their children.

They say were not a family, but we are, and were also Catholic and proud of it, said Esteban Castillo, an electronics specialist who lives with another man.

Castillo and a group of friends plan to gather with signs and a surprise element in front of the meetings venue -- the City Banamex convention center in Mexico City -- and loudly voice their right to be who we are, and demand to be respected and acknowledged as part of the Catholic community, as Castillo put it.

The organization of this years World Meeting of Families began during the last gathering, which was held in Valencia, Spain, in 2006, and was attended by Pope Benedict XVI.

Benedict will not be present at this years event, but more than 30 cardinals and 200 bishops from different countries will be participating, as well as hundreds of Catholic families from around the world.

The meeting is convened under the theme The Family: Teacher of Human and Christian Values, and participants will discuss their faith and encourage all Catholics to embrace a virtuous, moral conscience at a time when, according to the pope, there is often a divorce between what one claims to believe and the way one actually lives.

The organizers have urged participants to offer a prayer for families that clearly illustrates the churchs view of the family as a heterosexual union formed for the sole purpose of reproduction. The prayer says God is the creator of the human being in your image, who admirably formed him as male and female so that together and in reciprocal collaboration with love, they would fulfill his project of being fecund and dominate the earth.

Castillo said that even though the church rejects his sexual orientation, he still goes to Mass regularly. Its unfair for them to exclude and demonize us for forming part of a different kind of couple, he said.

But he is confident that that will change in the not-so-distant future, that is, if the Vatican doesnt want to be left without followers.

The World Meeting of Families takes place in a city where the municipal government and legislative body have clashed repeatedly with Catholic church authorities over municipal laws that recognize same-sex civil unions, legalize abortion, allow transsexuals to change their birth certificates to reflect their gender identity, and recognize the right of terminal patients to suspend medical treatment.

Msgr. Enrique Glennie, executive secretary of the Mexican bishops family life office, declared that with these laws, the citys authorities have furthered the breakdown of the family.

Elio Masferrer, president of the Latin American Association for the Study of Religions, told IPS that by not accepting the right of gays, lesbians and transsexuals to live as couples, the Catholic church was excluding a significant part of society and thus fuelling the loss of followers.

World | Gays to defend their right to be Catholic