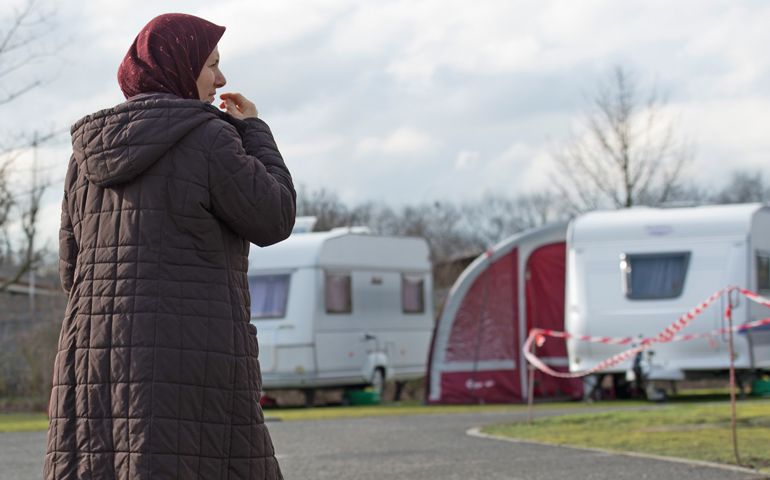 The German bishops' conference and Catholic women's organizations in Germany recalled the often dire fate of women refugees on the International Day for the Elimination of Violence against Women (Nov. 25).

Within the worldwide refugee and migration movement, women refugees were "particularly vulnerable" and often exposed to and suffered from violence, Bishop Franz-Josef Bode of Osnabrück, who is responsible for pastoral and women's affairs in the bishops' conference, recalled in the bishops' statement published on the conference's website.

Many of the women asylum seekers who arrived in Germany had suffered gender-specific violence, he noted. "A good third of all asylum seekers in 2016 were women many of whom have suffered women-specific violence." When women fled from their homelands because systematic rape of women and girls was used there as a war strategy, this was "particularly cruel", he pointed out, but "threatened abduction and enslavement, forced abortion, stoning, forced marriage, female genital mutilation and trafficking of women and girls are among the reasons why women flee." Violence (against women) is often the way a society expresses itself where women play a subordinate role or are seen as possessions," Bode said.

And even after their arrival in Germany to which they had fled, women refugees were not automatically safe and could still become victims of violence, he said. That was why it was vital for the church and society "to invest in violence prevention and help reduce violence which is directed specifically against women." That meant improving measures to guarantee women's safety in the refugee camps, facilitating access to shelters for battered women, providing helpers that women could trust, and making those who had been forced into marriage aware of their rights, Bode said.

The German Catholic church wanted to contribute towards helping to open new perspectives for women refugees in German society, which would enable them to lead self-determined lives and develop their potentials. "It is a scandal that women who are committed to interreligious dialogue and demand values like tolerance and equality, should be abused and threatened," Bode declared.

The German Catholic Social Service (SkF) deplored the "dramatic" shortage of places in women shelters. Again and again, women and their children, who were threatened with violence, had to be turned away because there was no room for them.

The German Catholic Women's Association (KDFB) demanded harsher penalties for perpetrators of violence. "Violence against women is a violation of human dignity. It is discriminating and prevents equality," recalled Maria Flachsbart, the German Catholic Women's Association's president. Men who treated women as objects and thereby denied them equality and dignity should be more severely punished, the association emphasized.